Please ensure Javascript is enabled for purposes of website accessibility
Log In Help Join The Motley Fool
Free Article Join Over 1 Million Premium Members And Get More In-Depth Stock Guidance and Research
By Matthew DiLallo - May 1, 2016 at 12:31PM

With oil prices starting to rally, some investors are considering a beaten-down oil stock. Here are three simple steps to picking an oil stock that won’t blow up.

After crashing to start the year, crude oil has made a fierce comeback, recently touching a 2016 high. There could be more gains on the way, given the growing consensus that the crude-oil market could be back in balance before the end of the year.

That optimistic outlook is starting to draw investors back into the sector, evidenced by the big rally in oil stocks over the past few months. But before diving in and buying an oil stock, make sure it meets the three points on this oil-stock checklist to save yourself from potential pain down the road. 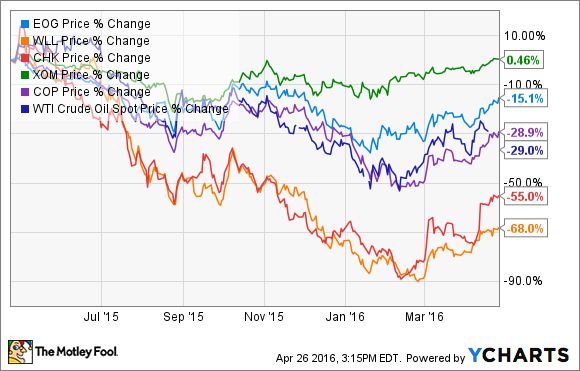 ExxonMobil (XOM 2.45%) was up slightly over the past year, while ConocoPhillips (COP 1.45%) and EOG Resources (EOG 2.87%) performed as well as, if not better than, the oil price. On the other end of the spectrum were Chesapeake Energy (CHKA.Q) and Whiting Petroleum (WLL), which saw their stocks crushed over the past year. Those stocks were crushed because they had too much debt, as evidenced by their weak credit ratings:

The credit of Chesapeake Energy and Whiting Petroleum is extremely speculative and very risky, meaning their stocks are even riskier. Conversely, ExxonMobil, EOG Resources, and ConocoPhillips all boast of solid investment-grade credit ratings, even though all three have had their credit ratings downgraded during the downturn. That strength amid the storm is why an investor would want to put a priority on owning an oil company with a strong credit rating.

No. 2: Is it geographically diversified?
Another commonality among weaker oil stocks is lack of diversification. That's another reason Whiting Petroleum has been hit so hard during the downturn. It's currently just focused on two geographies -- the Bakken and the Niobrara, which are both higher-cost basins. Those higher costs, when combined with its weak balance sheet, are why the company has decided to wind down its fracking operations this year and wait for oil prices to improve before it starts investing money in new wells.

On the other hand, ExxonMobil, EOG Resources, and ConocoPhillips own assets that span the globe, though EOG Resources is primarily focused on U.S. onshore unconventional plays. This vast geographic diversification enables these companies to be more flexible and focus on their best opportunities during the downturn. Further, it gives them greater access to the global price of crude, which often sells for a higher value than crude in the United States. That's especially true in the Bakken, which has struggled with discounted crude prices in the past because of the lack of adequate pipeline capacity to get its crude to market.

No. 3: Does its management team have incentive for returns?
A final criteria that warrants evaluation is what incentives the company's management team has. Last year taught investors a valuable lesson in management incentives, after companies such as Chesapeake Energy focused on growing production even as oil and gas prices were crumbling. In fact, the company nearly burned through its entire multibillion-dollar cash balance to grow production, putting itself in a precarious financial position in 2016 after it chased growth for the sake of growth.

EOG Resources, on the other hand, stands in stark contrast, with growth receiving a much smaller 8% weighting. Instead, it gives its management team incentive by putting more weight on returns on capital, relative stock price, and spending. Those incentives are partially why EOG Resources chose not to grow last year, instead focusing on improving its drilling returns. That decision paid off, with the company preserving capital while also improving returns so that a quarter of its drilling inventory is now solidly economic at sub-$40 oil.

Investor takeaway
Oil stocks are notoriously risky, because the price of oil can change on a dime. While that risk isn't going away, investors can help insulate themselves from the fallout of another oil crash by focusing on three factors before buying an oil stock:

If investors follow that simple three-point checklist, it will enable them to weed out oil stocks that could blow up when the going gets tough.