Please ensure Javascript is enabled for purposes of website accessibility
Log In Help Join The Motley Fool
Free Article Join Over 1 Million Premium Members And Get More In-Depth Stock Guidance and Research
By Daniel Sparks - May 2, 2016 at 11:51AM

Some auto industry watchers wondered if the Model X's much-hyped air filtration system was little more than a marketing ploy, so Tesla conducted a heavy-duty test to prove its effectiveness.

When electric-car maker Tesla Motors (TSLA -0.32%) unveiled the production version of Model X last September, there were a number of unexpected features, including the largest front windshield in production and self-presenting doors. But arguably the most surprising new feature was the SUV's "bioweapon defense mode."

"The net effect of the air filtration system is that you have air cleanliness levels which are comparable to a hospital operating room in the car," Tesla CEO Elon Musk said when he unveiled the feature.

But some have questioned whether the feature was the real deal, or just a marketing gimmick.

Model X in a biohazard bubble
In a new blog post, Tesla is asserting that it wasn't kidding about the air filtration system's capabilities.

First, the company emphasized that air pollution really is a serious problem and deserves attention.

Air pollution has a significant and pervasive impact on public health. According to the World Health Organization, it is now considered 'the world's largest single environmental health risk,' with more than three million people dying every year as a result. This is more than twice the number of people that die in vehicle accidents each year.

While the automaker had already put the system to the test in real-world environments including busy freeways, landfills, smelly marshes, cow pastures, and major cities in China, Tesla wanted to "take things a step further."

A Model X was placed in a large bubble contaminated with extreme levels of pollution (1,000 µg/m3 of PM2.5 vs. the EPA's "good" air quality index limit of 12 µg/m3). We then closed the falcon doors and activated Bioweapon Defense Mode.

The test, which apparently involved humans, was a success.

In less than two minutes, the HEPA filtration system had scrubbed the air in Model X, bringing pollution levels from an extremely dangerous 1,000 µg/m3 to levels so low as to be undetectable (below the noise floor) by our instruments, allowing us to remove our gas masks and breathe fresh air while sitting inside a bubble of pollution.

Not only did the vehicle system completely scrub the cabin air, but in the ensuing minutes, it began to vacuum the air outside the car as well, reducing PM2.5 levels by 40%. In other words, Bioweapon Defense Mode is not a marketing statement: It's real. You could literally survive a military-grade bio attack by sitting in your car. 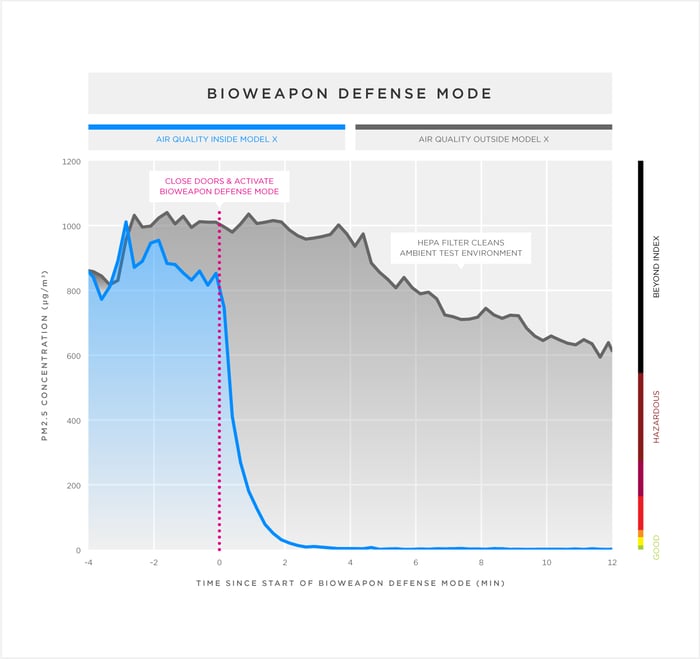 And Tesla isn't done with its air system. According to the company, subsequent filters, which current owners will be able to install as replacements in the future, will make it even better. The company is continuing to work to "improve the micro-geometry and chemical passivation defenses in the primary and secondary filters." Indeed, Tesla said in the blog post that it's open to suggestions on ways to improve the system.

Although bioweapon defense mode debuted in the Model X, the company recently added the feature to Model S as part of a slight redesign, which included a total makeover to the vehicle's nose cone.

As Tesla matures as an auto company, it's increasingly clear that one of its goals is to be a standard-setter when it comes to safety. The Model S received a 5-star rating in every category from the National Highway Traffic Safety Administration, and the company has said it expects the Model X and Model 3 will receive the same ratings when they are tested. Further, Tesla's autopilot safety features, including side collision avoidance, automatic emergency braking, and more, come standard on all of its vehicles.