Please ensure Javascript is enabled for purposes of website accessibility
Log In Help Join The Motley Fool
Free Article Join Over 1 Million Premium Members And Get More In-Depth Stock Guidance and Research
By Andrew Tonner - May 3, 2016 at 6:41AM

Despite a strong start, Apple's best-selling smartwatch won't become its next 100-billion-dollar device.

Though you probably don't realize it, the Apple (AAPL -1.15%) Watch has been one of the tech giant's most-successful devices ever. April 24 marked the one-year anniversary of the Apple Watch's sales debut and  the device inspires no shortage of strong opinions among investors and tech enthusiasts.

Especially in light of Apple's recent growth struggles, the company needs the Apple Watch to succeed now more than ever. Keeping that in mind, let's look at what the Apple Watch achieved in its first year on the market, and what Apple investors should expect from the device in the months and years ahead.

An undisputed winner
Regardless of your opinion on the device, one simple fact lies beyond dispute: The Apple Watch has been one of Apple's fastest-selling products ever. No doubt Apple's current installed base in excess of 1 billion devices presents the Apple Watch with an inherent built-in advantage over previous new products.

Apple declines to publicly state in its quarterly filings how many watches it has sold. Watch sales combine with devices like Beats headphones and iPods to form Apple's "other products" reporting segment. However, analysts estimate Apple sold about 12 million Watches in its first year on the market, which compares quite favorably to past Apple products' first-year sales 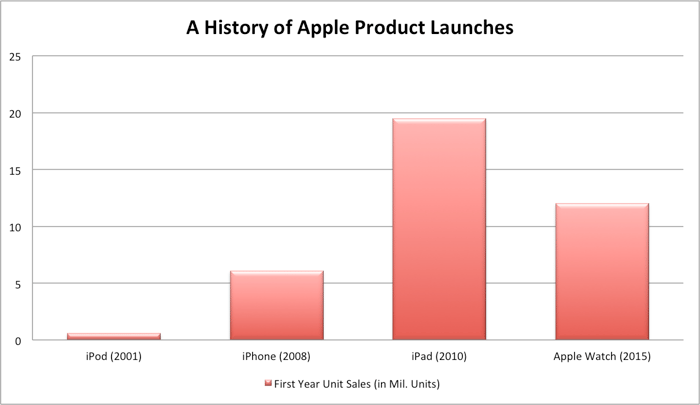 At an assumed price of $500 per unit, this implies the Apple Watch alone generated $6 billion in revenue last year. Though that pales in comparison to the sheer enormity of, say, the iPhone, that $6 billion in Apple Watch revenue is more than three times more than FitBit's total revenue in 2015.

Not without its issues
At the same time, the Apple Watch is by no means a perfect device, as its many detractors frequently remark. As The Wall Street Journal's great tech reporter Joanna Stern succinctly put it: "Apple's new watch wants to be your all-day helper. But the promise doesn't always match reality." She certainly isn't the only reviewer to like, but not love, the Apple Watch.

That's because the Apple Watch in many ways serves many of the same uses as the iPhone. Having quick access to features like push notifications or digital tickets seems genuinely useful, but does it justify the expense, especially after Apple recently reduced iPhone prices? I can certainly see how some might say "no."

Another aspect of this criticism is that the Apple Watch doesn't do anything that the iPhone or other smartphones cannot, unless you think sending beating-heart emojis to your friends adds a lot of value. Futurists and gadget enthusiasts have long argued that smartwatches can help usher in a new era in biometrics and disease prevention. However, given the current difficulties even embedded heart-rate sensors encounter in producing accurate results, the game-changing functionality that many hope for remains rooted in the distant future.

This lack of a true killer features means the Apple Watch will likely remain more of a gadget than a necessity until any major breakthrough reaches market. If you think it's cool, and you want one, you'll likely enjoy it. However, its overall utility remains far lower than a device like a smartphone as analysts' sales expectations also indicate.

Apple Watch outlook
Viewing the Apple Watch's truly impressive short-term success only tells one part of its story. To more fully understand the device's likely long-term place within Apple's money-printing financial structure, we need to also consider what its future might look like with a bit more specificity.

For the reasons above and a few more, the Apple Watch should grow into a nice financial segment for Apple. At the same time, though, analysts believe it is unlikely to produce the same kind of financial impact similar to core Apple products like the iPhone. Here's how research firm IDC projects Apple Watch's unit sales will compare to the iPhone's first six years on the market. 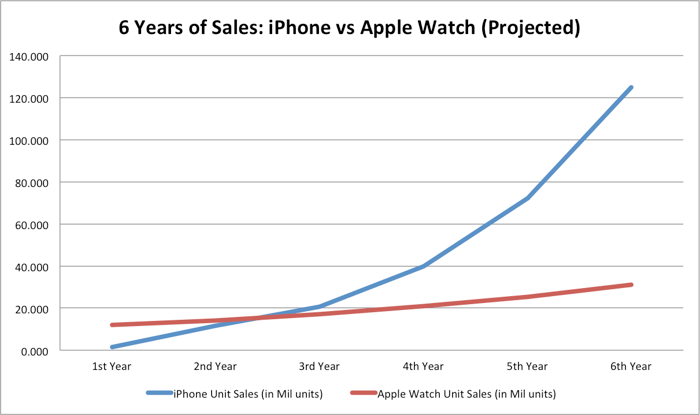 This is the critical point for Apple investors. Yes, the Apple Watch produced impressive results in its first year on the market. However, its ceiling is more likely to be that of an iPad than an iPhone.

This, of course, is by no means a negative. Assuming this same $500 average-selling price mentioned above, this implies a fresh $15 billion in Apple Watch revenue by 2020. Rather, it speaks to Apple's nearly mind-bending enormity that reaching $15 billion in sales in six years seems unremarkable.

While the Apple Watch deserves plenty of credit for its impressive first-year results, investors would do well to focus on higher-impact areas of the company's product portfolio.