Please ensure Javascript is enabled for purposes of website accessibility
Log In Help Join The Motley Fool
Free Article Join Over 1 Million Premium Members And Get More In-Depth Stock Guidance and Research
By Daniel B. Kline - May 3, 2016 at 12:08PM

One company is on the way up while the other is already sitting at the top. But don't think the choice here is simple.

AT&T, as the reigning champion takes on the Apollo Creed role, while brash upstart T-Mobile plays underdog Rocky Balboa. One is a proud, once seemingly unbeatable champion that has had some vulnerabilities exposed. The other has transformed itself from an impossible long shot with a puncher's chance, into a legitimate contender whose victory you could credibly make an argument for.

Of course, Rocky II, ended with a very narrow victory for the challenger when Balboa got back to his feet while Creed crumpled to the ground, after the two boxers jointly crashed to the canvas. It's possible the question of which of these stocks is the better buy could be equally close.

With AT&T you get stability, diversity in cable and broadband along with wireless, and the champion/incumbent leader's advantage. Picking T-Mobile gives you tremendous growth potential, as well as the possibility that a bigger player might acquire the company at a premium, or that there might be a merger on more equal terms.

But it's worth noting that buying AT&T brings you the steady hand of CEO Randall Stephenson at the helm, while purchasing T-Mobile shares comes with the always-unpredictable rock 'n' roll roadshow offered by CEO John Legere. Arguments can be made in favor of both styles of leadership, but the T-Mobile boss certainly brings a greater risk/reward factor to the table. The vociferous nature of Legere has generally been a positive for the company, but there's always the possibility it could get him in trouble. 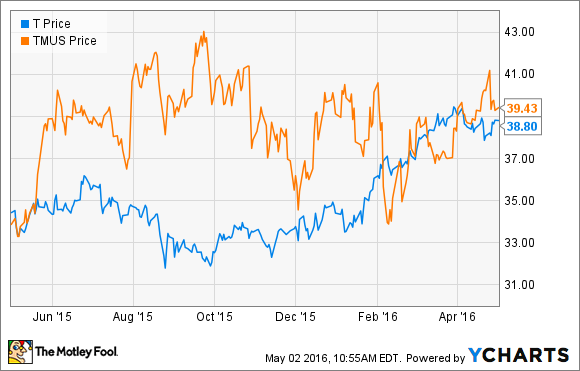 Decline versus growth?
The question of which of these stocks is a better pick for your portfolio centers around whether or not you believe that T-Mobile has strong growth ahead of it, and whether or not AT&T has entered a decline. It's easy to make a growth case for Legere's company, since it has added over one million customers every quarter for the last seven in a row, and forecasts adding 3.2 to 3.6 million new subscribers this year, according to Bloomberg.

That forecast rate would actually represent a slight slowdown for T-Mobile, but it's better than the growth picture at AT&T across all of its divisions. In wireless, AT&T lost 363,000 postpaid customers in the first quarter of 2016. When you factor in non-contract users, tablets, and other device connections, it did gain customers overall, but in the lucrative post-paid category it has dropped for six straight quarters.

The numbers were equally poor in the company's pay-television business. It added 328,000 customers to its DirecTV satellite business, but lost slightly more than that on the U-verse side of the equation. AT&T did gain 186,000 broadband subscribers in Q1, and that business has been steadily growing industry wide.

It's a matter of degrees

T-Mobile offers big growth, which might be showing signs of slowing a little. AT&T will, almost certainly, either cut prices to keep people from going to cheaper rivals (like T-Mobile), or accept losing some wireless customers. In addition, the company has been experiencing a steady trickle of customers away from its pay-television business; that's likely to continue, though it could be offset by gains among broadband subscribers.

Basically, AT&T looks to be a stagnant company that's slowly bleeding away some of its customer base. But when put in context, it's still a revenue monster, that has been a stable income stock for many shareholders. Whether this is sustainable in the long-term is questionable.

T-Mobile offers a more exciting story. It's growing by leaps and bounds, and the presence of Legere adds a bit of "what's going to happen next?" magic to the mix. There's more risk in its shares because the company only operates in one segment of the market. The needle is pointing up for T-Mobile, and that makes it a very attractive acquisition target in a space which has been seeing consolidation.

It's hard to picture Legere accepting a subordinate role to another CEO, which minimizes the number of potential partners for T-Mobile. It's also worth noting that any buyer would have to come from pay-TV, broadband, or another space in the market because the Federal Communications Commission has made it clear that it won't let the United States go from four wireless companies to three.

Despite all that, if given the choice, I'd take Rocky over Apollo simply because there is more upside. T-Mobile is growing and its user base and top-notch (albeit unconventional) leadership make it attractive for a bigger player to buy at a hefty premium over the current stock price. It seems better to buy a company on the ascent, than one waiting to potentially be toppled.