Since going public, Hain Celestial Group, Inc (NASDAQ:HAIN) has consistently delivered strong sales and earnings growth, making it one of the best investments anyone could have made over the past 20 years: 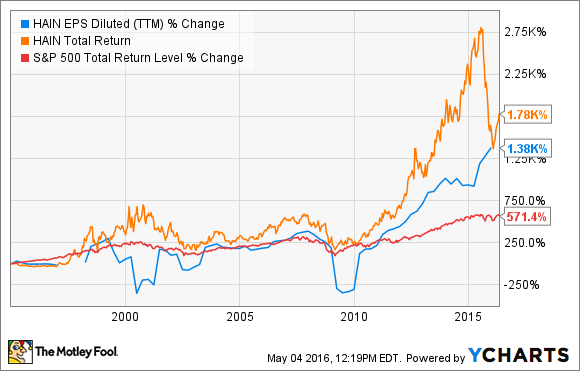 However, slowing growth in recent quarters, along with a pretty broad stock market sell-off, have pushed the company's stock price down significantly from its all-time high. However, it's looking like Hain may have reignited its growth, with sales up 15% on a constant currency basis in the just-announced third quarter, and earnings up nearly 50%.

What's changed? Can the company continue driving double-digit growth every quarter? Let's take a closer look at Hain's financial and operating results, and three things that could continue to drive bigger profits.

Hain also reported that its operating free cash flow -- meaning operating cash flow minus capital expenditures -- was $73.8 million, more than double $33.9 million one year ago. In other words, Hain generated a lot more cash from earnings this quarter, even after spending more on capital expansion this quarter.

As you can see, even with a slight dip in gross margin, consistent expense management as a percent of revenue kept operating margin steady. And since revenue was up 13%, this drove earnings and cash flows significantly higher in the quarter. For the year so far, the results are even more improved, with an operating margin of 9.8%, up significantly from 8.2% nine months into fiscal 2015, driven by generally better gross margin and lower SG&A as a percent of revenue.

Project Terra
Hain's acquisition growth is a model that often leads to unwieldy, top-heavy businesses that realize little of the promised benefits when acquisitions were first announced. Hain, under the leadership of co-founder and CEO Simon Irwin, has historically done a great job of keeping the company's costs from running rampant.

Hain is continuing that historic excellence and expanding on it with its "Project Terra" initiative, aimed at producing $100 million in savings within a couple of years. This will include grouping its core brands under five strategic platforms:

The company says the purpose of establishing these five platforms is to "drive accelerated net sales and margin growth."

The company is also launching "Cultivate Ventures" a business unit to strategically invest in smaller Hain brands the company views as having strong growth potential, as well as to develop and invest in new products outside of the company's current portfolio.

Meiers, who will head up this initiative under his new role, emphasised that cost savings would be achieved with "equal or higher" product quality.

Focus on driving core sales growth
Despite recent slips with some key brands, core sales growth is hugely important to Hain's success. This is particularly true after reporting sales declines in the U.S. and U.K. segments in the first two quarters of the year. In the third quarter, revenue increased 2.4% in the U.S. and 17% in the U.K., a key reversal that's likely a big reason Hain shares jumped almost 9% following the earnings release.

This was a huge step forward for Hain, giving indication that moves the company started making a few quarters back are paying off. Management said on the earnings call that Sensible Portions sales are bouncing back at retailers like Wal-Mart after losing shelf space for several quarters. Increased distribution is driving growth as well, with a number of major grocers adding the product to their shelves in recent quarters. Simon also said Maranatha nut butter sales have recovered after a major recall cost the company both retail and private label business over the past year.

There are some key areas still underperforming.

Hain lowered pricing on its Spectrum coconut oil products but said those benefits are still early at retail, and it will take more time for the results to show.

Celestial Seasonings continues to be a sore spot for Hain after what can only be called a failed rebranding attempt. The company has decided to reverse course and return to its original packaging, with the hopes that sales just return to prior levels after more than a year of big declines. The good news is that, even after losing sales, the company hasn't lost any retail distribution.

Looking ahead
While it's still early to know how "Project Terra" will pay out in terms of driving down costs, and how its efforts to drive sales growth will play out over the long term, the results in the third quarter give some indication that things are working.

There's still progress to be made, but there is also reason to be optimistic. Combine that with the company's historical performance under Simon, and there's a lot to like about what's happening at Hain right now.