Please ensure Javascript is enabled for purposes of website accessibility
Log In Help Join The Motley Fool
Free Article Join Over 1 Million Premium Members And Get More In-Depth Stock Guidance and Research
By Leo Sun - May 6, 2016 at 9:09AM

Both hard drive makers are having a tough time -- but is one better than the other?

Hard-drive makers Western Digital (WDC -3.15%) and Seagate (STX) were both recently pummeled after reporting dismal third-quarter earnings. Both companies were hit hard by a slowdown in PC sales and the cannibalization of HDDs (hard-disk drives) by SSDs (solid-state drives).

Shares of WD and Seagate have both declined more than 60% over the past 12 months, which boosted their dividend yields to historic highs. But does that make either stock an attractive income-generating value play?

How bad were the numbers?
During the first quarter, WD's revenue fell 20.6% annually to $2.82 billion, which missed forecasts by $40 million. Seagate's revenue dropped 21.9% to $2.6 billion, which matched estimates. Both companies' revenues have been falling ever since 2013 and aren't expected to bottom anytime soon. 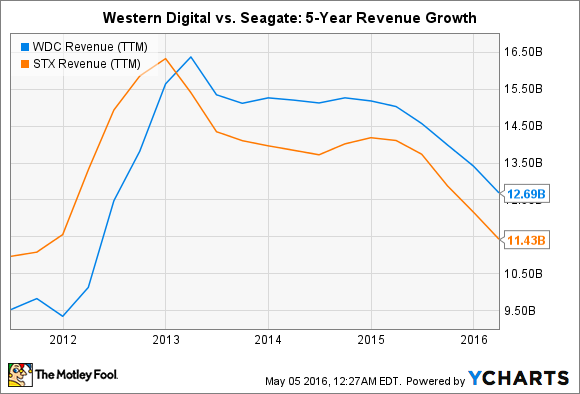 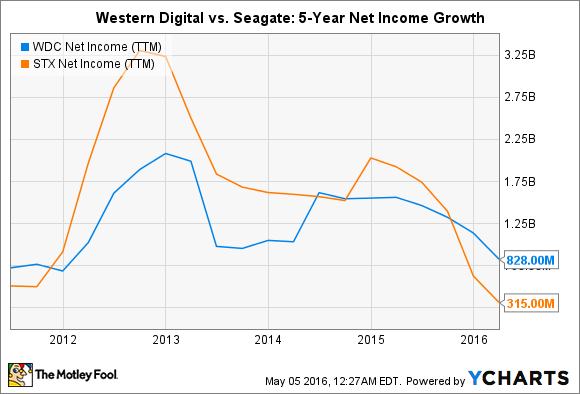 WD also expects the full integration of HGST (Hitachi Global Storage Technologies) -- which was cleared by Chinese regulators last October -- to generate $800 million in cost savings by the end of 2017, up from its prior guidance of $650 million.

Seagate spent a lot of money consolidating the fragmented HDD market over the past decade, but it's spent a lot less money on SSDs and flash memory. The company's main foothold in that market is a multi-year NAND supply and enterprise SSD alliance with Micron (MU -2.95%), which controls around 10% of the SSD market. It also produces SSHDs (solid-state hybrid drives), which boot up faster than an HDD but cost much less than an SSD. Like WD, Seagate will generate some cost savings from its full integration of Samsung's HDD operations, which was also approved by Chinese regulators last year.

But investing in SSDs might not be enough
WD and Seagate are trying to counter the cannibalization of their core HDD businesses by diversifying into SSDs, but both companies could merely be shifting from one commoditized market into another.

DRAMeXchange claims that 2.5" SSDs cost 11 times more than HDDs on a dollar per GB basis in 2012, but they now only cost about 6.5 times as much. The company expects that gap to narrow to 2.8 times in 2017 and potentially achieve price parity a few years later. If this happens before WD and Seagate diversify enough of their business away from HDDs, their core businesses could collapse.

Valuations and dividends
WD trades at 9 times earnings, and Seagate has a higher P/E of 18, but both ratios remain lower than the industry average of 23 for data storage companies. Looking ahead, analysts expect WD's earnings to fall 1.5% annually over the next five years, while Seagate's earnings are expected to decline 6%.

The better value play: Western Digital
WD and Seagate are both in bad shape, but WD is clearly the better pick. Its margins are higher, its valuations are lower, its dividend is sustainable, and it's better invested in the future through its acquisition of SanDisk. Seagate must make big changes to keep up -- otherwise it could be left in the dust by WD, Samsung, and other major storage players within the next few years.