Please ensure Javascript is enabled for purposes of website accessibility
Log In Help Join The Motley Fool
Free Article Join Over 1 Million Premium Members And Get More In-Depth Stock Guidance and Research
By Brian Feroldi - May 6, 2016 at 10:04AM

This once-promising clinical-stage company is trying to prove that it's not dead yet, but investors remain skeptical.

What: Shares of Chimerix (CMRX -1.21%), a clinical-stage biopharmaceutical company, continued to crawl back to life in April as the company's stock jumped 14.3% during the month, according to data from S&P Global Market Intelligence.

So what: Chimerix didn't have any news released during the month, so its hard to pinpoint the exact reason shares moved higher. We do know it wasn't caused by excitement for the biotechnology sector in general since the SPDR S&P Biotech ETF (XBI -0.15%) largely traded sideways for the month. 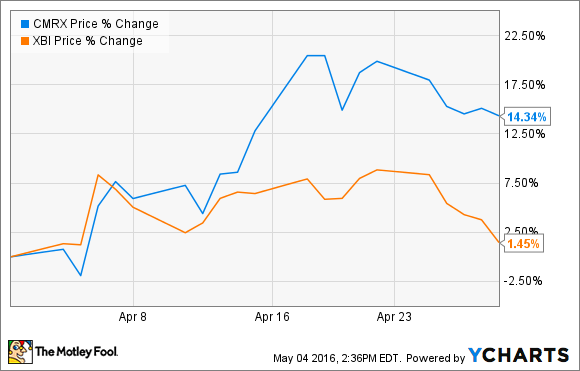 Regardless of the stock's positive move, it's clear the investment community remains highly skeptical about Chimerix's future. Shares are still down more than 90% from their 52-week high, and the short interest in this stock has doubled since the start of the year.

It's been a rough ride for this company ever since it released late-stage clinical results for its lead compound brincidofovir late last year. The study was testing brincidofovir as a potential preventative treatment for cytomegalovirus infection in patients undergoing hematopoietic cell transplantation. When news broke that the company failed to meet its primary endpoint, shares collapsed, dropping more than 80% in a single day. Ever since, many investors have assumed the company was toast.

However, not everyone believes Chimerix is dead yet -- brincidofovir is currently in late-stage trials for a handful of other diseases. If those trials go well, it's possible the drug could still find its way to market.

Now what: Despite the huge setback last year, investors have a number of milestones to look forward to during 2016. Specifically, the company plans on reviewing data from its AdVise study over the summer with regulators to gain insights on what kind of data they need to see before the company submits the drug for review.

In addition, Chimerix confirmed it is still tinkering with brincidofovir, and they plan on initiating clinical studies to test their new intravenous formulation of the drug later this year. The company is also running studies testing brincidofovir as a treatment for smallpox, BK virus, and more.

Still, the market isn't giving this company any credit. Its current market cap of roughly $250 million is nearly $100 million less than the $343 million in capital (i.e. cash and short- and long-term investments) it held at year end. A disconnect like that indicates that many investors still assume brincidofovir will turn into a dud, and the the company will only waste that capital on clinical studies that will lead nowhere.

Chimerix stock will likely continue to bounce around, but until the company proves brincidofovir still has a future, I have a hard time seeing the market revaluing shares to above their cash level. For that reason, I think investors would be best served to give this beaten-down stock a pass.

Why Chimerix Stock Skyrocketed on Friday

Could These 2 Biotech Stocks Really Double Your Money?