What: Investors in Chimerix (NASDAQ:CMRX) managed to buck the market wide sell-off today as shares of the clinical-stage biopharma jumped more than 13% as of 2:50 p.m. ET after an analyst published a bullish forecast for the company's stock.

So what: Piper Jaffray analyst Joshua Schimmer boosted his price target for Chimerix to $18, up from his prior target of $11, as he believes that odds are favorable that brincidofovir will gain approval for treating adenovirus and smallpox. He also noted that the potential still exists for brincidofovir to be used as a treatment for organ transplant, even after the early results from the drugs SUPPRESS trial indicated otherwise.

One big reason for Shimmer's bullish call is that the current market price of the company's stock values the entire firm below its current cash balance. That indicates that the market is pricing Chimerix for death even though brincidofovir still holds potential to treat other diseases.

At least one hedge fund appears to agree with Schimmer conclusion. A recent SEC filing shows that Bridger Management LLC substantially increased its position in the company to 2,967,186 shares, which represents just over 6% of the shares outstanding.

The positive analyst note, mixed with the new of Bridger Management taking a sizable position in the company, appears to be the reason for the positive market reaction today.

Now what: While stocks markets everywhere have taken it on the chin since the start of the year, biotech stocks have been hit especially hard. The SPDR S&P Biotech ETF (NYSEMKT:XBI), an exchange-traded fund that holds a collection of small-cap biotechnology companies, is down more than 22% since the calendar turned to January first. The strong moves in Chimerix's stock over the last few trading days have helped it to largely sidestep the carnage. 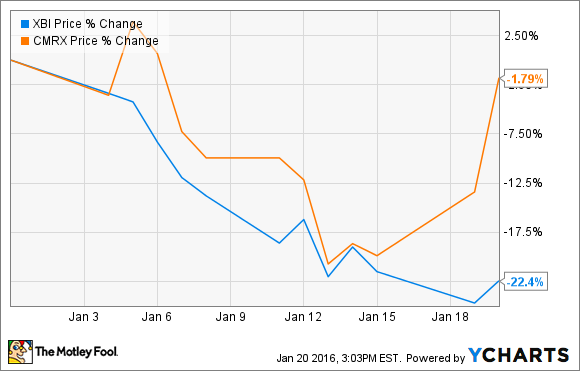 Given that Chimerix's future is still filled with uncertainty, its stock is likely to remain extremely volatile. The company is planning on sharing additional details related to its SUPPRESS trial in February, so investors who are considering purchasing shares in this company might want to wait until they have more data to look at before they make the plunge.