Please ensure Javascript is enabled for purposes of website accessibility
Log In Help Join The Motley Fool
Free Article Join Over 1 Million Premium Members And Get More In-Depth Stock Guidance and Research
By Timothy Green - May 6, 2016 at 1:49PM

FireEye's growth is slowing down, and the departure of the CEO isn't giving investors much confidence in the company.

What: Shares of cybersecurity company FireEye (MNDT 0.41%) slumped on Friday following the company's first-quarter earnings report. Mixed results, weak guidance, and the departure of the company's CEO pushed the stock down about 18.5% by 11:45 a.m. ET.

So what: FireEye reported quarterly revenue of $168 million, up 34% year over year but about $3.8 million shy of the average analyst estimate. Product revenue declined 16% year over year to $33.7 million, while subscription and services revenue jumped 57.7%. Billings of $186 million grew by 23%, above the company's guidance.

FireEye reported a non-GAAP loss of $0.47 per share, compared to a loss of $0.48 per share during the prior-year period. This was slightly better than analyst expectations, which called for a loss of $0.50 per share. FireEye was even more unprofitable on a GAAP basis, with a net loss of $155.9 million, or $0.98 per share.

Now what: FireEye CEO Dave DeWalt is stepping down, transitioning to the role of executive chairman of the board effective June 15. The current president, Kevin Mandia, will take the helm as the new CEO.

An executive shuffle, mixed earnings, and lackluster guidance were more than enough to send shares of FireEye tumbling on Friday. The stock is now down about 86% from its peak in 2014. 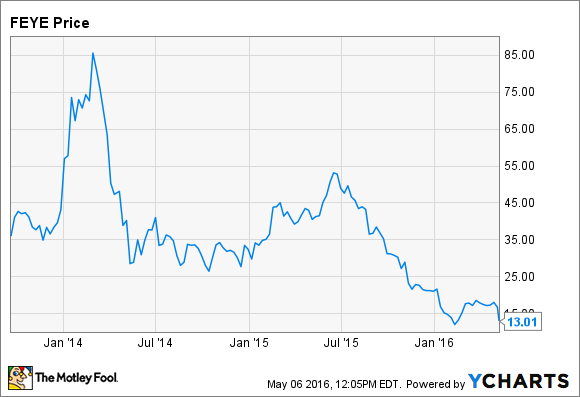 FireEye's revenue guidance represents growth of 27.6% at the midpoint, a substantial slowdown compared to recent years. While growth becomes more difficult the larger the company becomes, investors appear unwilling to assign FireEye its former nosebleed valuation while the company continues to post massive losses. With FireEye guiding for slower growth than expected, investors are punishing the stock.