Please ensure Javascript is enabled for purposes of website accessibility
Log In Help Join The Motley Fool
Free Article Join Over 1 Million Premium Members And Get More In-Depth Stock Guidance and Research
By Daniel Miller – May 7, 2016 at 2:13PM

These two phenomenal companies have also been two of the most frustrating stocks to hold in recent years thanks to the market's unwillingness to assign decent P/E multiples.

As an individual investor, there are few things more frustrating than watching a business you own shares of do exceedingly well, only for the market to shrug its shoulders. At a time when some companies can send their stock prices through the roof on hopes, dreams, and promises -- I won't name any names, here -- others can produce record profits or a cash pile the size of some small countries, only to be sold off for other reasons.

That kind of frustration is likely what many Ford Motor Company (F -2.60%) and Apple, (AAPL 0.23%) investors feel like over the past couple of years.

Why are Ford's wheels spinning?
You could pretty easily argue that Ford has improved every aspect of its business from top to bottom over the past decade. Ford has drastically reduced the number of vehicle platforms it uses across the globe, helping cut costs and improve scale.

It's revived its passenger car segments with hugely successful cars like the Fusion in the U.S. market and the Fiesta and Focus, which both outsell any other nameplate globally. It continues to roll out popular SUVs that rake in the profits, and it was bold enough to change its bread-and-butter F-Series truck from steel body panels to aluminum to help improve fuel economy.

The company has improved its balance sheet, become investment-grade, reinstated its dividend, and even introduced a supplemental dividend to reward shareholders when times are good. And, most importantly, what do all of these changes equate to? A massive increase in profitability. The thesis has always been that Ford's earnings would rise quickly enough to reward investors with a market-beating stock. Instead, with profits rising and a stock price that's spinning its wheels, Ford's forward P/E dropped to a paltry 6.5, and Wall Street's response resembled Homer Simpson apathetically drooling and mumbling "mmmm... record profits..."

Sadly for investors holding onto shares of Ford, the company is also more forward-looking than it has been in decades -- a strategy Detroit automakers weren't always known for. Ford's investing $4.5 billion in electrified vehicle solutions by 2020, which includes the new Focus Electric with all-new DC fast-charge capability (it will deliver 80% charge in about 30 minutes and a projected 100-mile range). Further, Ford is adding 13 new electrified vehicles to its lineup by 2020, at which time more than 40% of its nameplates globally will be electrified.

On a similar note, Ford's management is aware of emerging technology and innovative business models, such as Uber and Lyft in the ride-sharing segment. The company understands that the way we travel is changing rapidly, and it has already launched at least 25 global mobility projects -- ranging from big data projects to shuttles, car swaps, and parking apps, among many more -- to test new ideas and address an increasingly urbanized world.

Just last week, Ford posted its most profitable quarter ever. The company is arguably more forward-looking and innovative than it has been in decades, is healthier than ever, and is producing popular cars. Unfortunately, the market refuses to give Ford credit, seemingly saying, "What if this is as good as it gets?"

Singing a similar tune
Ford shareholders aren't the only frustrated bunch in 2016; Apple shareholders know the feeling. Despite selling a massive 51.1 million iPhones last quarter, it was a 16% decline from the previous year's phenomenal quarter of sales. During the recent quarter, Apple generated net income of $10.5 billion from revenue of $50.6 billion -- these are massive, massive figures. 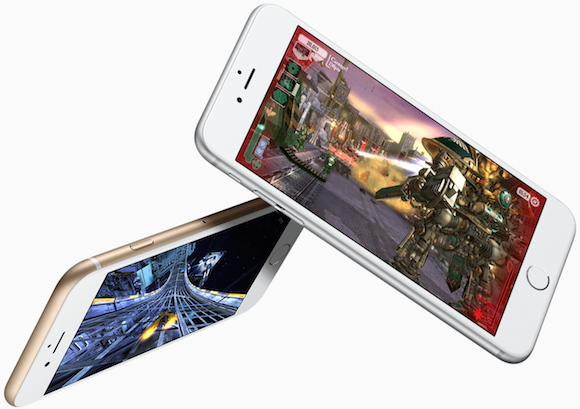 Obviously, those factors are driven by the iPhone, which will likely surpass over 1 billion units sold over the next couple of quarters -- a rarely accomplished feat for any product line. While many investors question what's next for Apple, and many wonder if the tech company can remain as innovative as it has in the past, it's not like the product pipeline is non-existent.

While the Apple Watch is in the early innings, it has the potential to turn into a product we can hardly imagine at this point. There's also the potential of Apple Pay and Apple TV, which will help drive incremental revenue in the years ahead.

Also, the amount of value Apple has dished back to investors can't be ignored. Take it from my colleague, Evan Niu, who recently wrote: "To date, Apple has repurchased $116.6 billion worth of stock, which is a pretty astounding figure when you think about it. That's greater than the entire market caps of tech companies like Qualcomm ($78 billion), Baidu ($65 billion), and Texas Instruments ($60 billion)."

In combination with share buybacks, Apple has consistently upped its dividend payout -- just look at the lovely "X" forming on the graph as shares outstanding decline and the dividend moves higher. 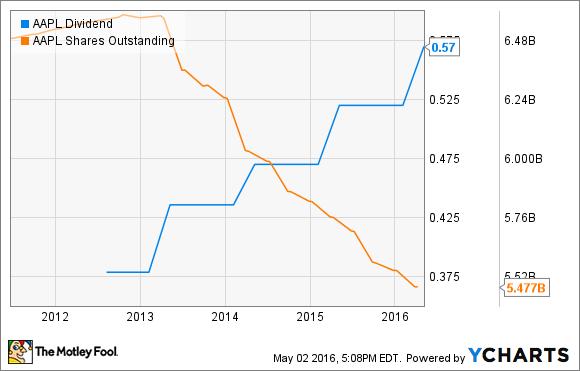 To top it all off, Apple still has a staggering $233 billion in cash and marketable securities; while some of that would be lost to taxes if brought back to the U.S., it's still a freakishly large number.

Look, I get it: Apple has the hurdle of peaking iPhone sales, and Ford has the equivalent hurdle of peaking auto sales in the U.S. market. And, yes, it's difficult to reward companies with uncertain growth strategies with a higher earnings multiple. Still, these are two of the best-run companies in the market, and they're pumping out ridiculously profitable quarters.

It's unfortunate that these two phenomenal companies are also two of the most frustrating stocks to hold, because regardless of their strong businesses, the market is rewarding them both with forward P/E ratios of less than 10, and there's little the companies can do to change that.

Daniel Miller owns shares of Ford. The Motley Fool owns shares of and recommends Apple and Ford. Try any of our Foolish newsletter services free for 30 days. We Fools may not all hold the same opinions, but we all believe that considering a diverse range of insights makes us better investors. The Motley Fool has a disclosure policy.