Please ensure Javascript is enabled for purposes of website accessibility
Log In Help Join The Motley Fool
Free Article Join Over 1 Million Premium Members And Get More In-Depth Stock Guidance and Research
By Daniel B. Kline - May 7, 2016 at 7:53AM

The company had a much-better-than-expected earnings report.

The Container Store Group (TCS 5.62%) dramatically beat its comparable-store sales growth guidance, which caused its shares to jump higher after it reported Q4 and year-end results.

Based on these numbers, the company's shares, which closed March at $5.87, shot up after the earnings report to close April at $7.10 a nearly 21% increase according to data provided by S&P Global Market Intelligence. 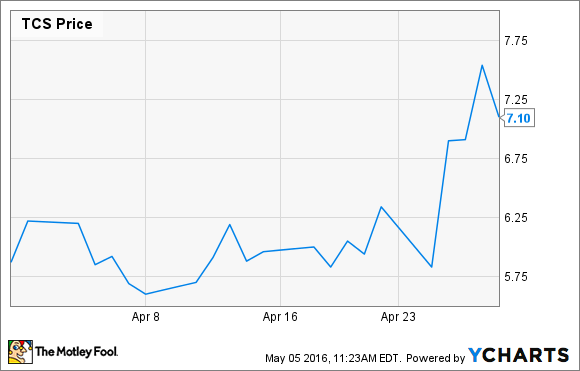 So what: The quarter was both a big surprise and a big win for the company. CEO Kip TIndell explained in part why the numbers were so much better than expected.

Now what: The market tends to reward a company that beats its projections, which clearly happened here, but The Container Store will need to do better at forecasting its results going forward to avoid a surprise in the other direction.

In 2016 the company expects consolidated net sales between $830 million and $845 million based on expected store openings and a comparable store sales change of -1.5% to +0.5%. It also predicts net income between $0.20 to $0.30 per diluted common share with adjusted EBITDA between $75 million to $85 million.

In the long run, The Container Store will serve its shareholders better by hitting those numbers or exceeding them slightly. Blowing them out of the water, which the chain did this quarter, can create an expectation of doing that every quarter, which can actually send share prices down even when the numbers are on target.

Basically, this was a big beat and that's great for a quarter, but not something the company should make a habit of.