Please ensure Javascript is enabled for purposes of website accessibility
Log In Help Join The Motley Fool
Free Article Join Over 1 Million Premium Members And Get More In-Depth Stock Guidance and Research
By Joe Tenebruso - May 8, 2016 at 7:29AM

Can the video ad platform continue to capture a larger share of advertisers' budgets?

It's been a bumpy ride for TubeMogul (TUBE) so far in 2016. By February, shares had fallen more than 20%. They then went on to surge more than 40% from those levels by April, only to erase those gains by early May. The volatility is likely to continue when the digital video ad platform reports first-quarter results on May 9. 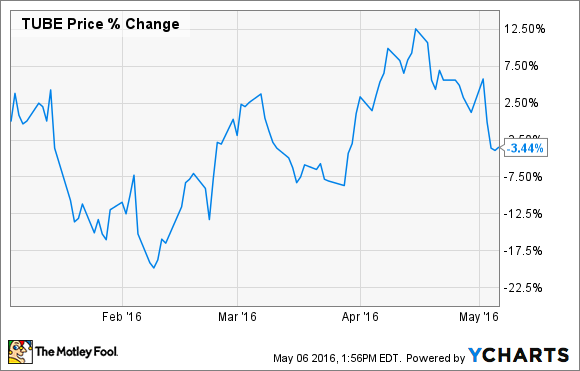 In its fourth-quarter earnings press release, TubeMogul's management issued Q1 guidance that included expectations for revenue in the range of $40 million to $42 million and gross profit of between $28 million and $30 million. Beyond those headline figures, here are some key items to watch for in TubeMogul's first-quarter results, which will likely determine whether future volatility is to the upside or downside.

Total spend
The major driver of TubeMogul's revenue is what the company refers to as "total spend," which is essentially the amount that TubeMogul's customers spend through its platform, including the cost of media purchases and TubeMogul's fees.

In February, TubeMogul's management forecast first-quarter total spend to be in the range of $108 million to $110 million, which would represent year-over-year growth of about 53% at the midpoint.

For Q1, investors will be watching to see if TubeMogul can deliver on this target. Perhaps more importantly, shareholders will look for any comments from management as to whether the company remains on track to hit its full-year total spend guidance of between $569 million and $577 million.

Platform direct results
Investors are also likely to pay particular attention to the growth of TubeMogul's platform direct segment. This offering allows TubeMogul's customers to use its software to execute their own advertising campaigns. Due to the self-service nature of this business, platform direct is TubeMogul's highest-margin and most scalable business segment.

In Q1 and the quarters that follow, investors will likely want to see steady increases in the number of platform direct clients, as well as the amount of spend per client.

How to access TubeMogul's results
TubeMogul will announce its first-quarter financial results on Monday, May 9, after the U.S. markets close. Investors can tune in to its live conference call, where management will discuss the quarter's results, at 5:00 p.m. ET. Both the release and a link to the conference call will be available at the company's investor relations website.