Please ensure Javascript is enabled for purposes of website accessibility
Log In Help Join The Motley Fool
Free Article Join Over 1 Million Premium Members And Get More In-Depth Stock Guidance and Research
By Ashraf Eassa - May 9, 2016 at 9:30AM 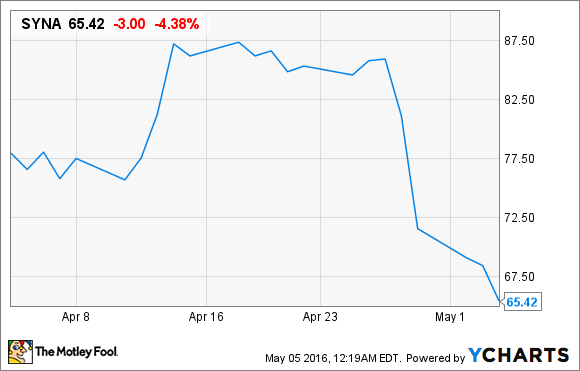 It's not hard to see why, too. The company reported revenue of $402.5 million, broadly missing the company's previously issued guidance of between $430 million and $470 million.

To make matters worse, the company is looking for just $300 to $340 million in sales for the current quarter, which widely missed consensus expectations of $478.6 million.

Although the headline numbers were far from ideal, there's more to the story worth considering. Here are five quotes from Synaptics' most recent earnings call that investors that shed some additional light on the company's business.

Bergman went on to blame this shortfall on "ongoing macroeconomic issues in the high end smartphone market."

It's worth noting that Apple (NASDAQ: AAPL) is known to be a major customer of Synaptics' display driver chips.

As if weak end-demand for iPhones weren't bad enough for Apple and its suppliers, the iDevice maker signaled to investors on its most recent earnings call that it plans to burn off more than $2 billion worth of channel inventory (with much of it being higher end iPhone inventory).

It's no surprise that the portion of Synaptics' display driver business that's tied to the high-end of the smartphone market is suffering a material near-term setback.

Adding some additional color to this, CFO Wajid Ali indicated that "more than half" of the shortfall that Synaptics is guiding to in its current quarter "is coming from [Synaptics'] display driver business." Ali also said that a "smaller amount" of the aforementioned shortfall is attributable to the company's "high-end smartphone business, primarily as it relates to touch."

Bergman continued, stating that Synaptics management is "anticipating normal seasonal patterns to return in the second half of the calendar year." Given that Apple is expected to launch new flagship iPhone models in September, and since Apple is likely to use newer display drivers in the new models, Synaptics should undoubtedly benefit from the ramp of these new phones.

"We've been very pleased that our fingerprint sensors have been designed into over 20 phones including several new Asian customers," Bergman noted.

It appears as though Synaptics' bet on Validity Sensors, and the proliferation of fingerprint authentication technology in the broader smartphone market, is paying off quite nicely.

The executive talked up what appears to be the first publicly announced design based on ClearForce -- the Meizu Pro 6 smartphone -- and told investors to expect "a growing base of customers to implement [Symaptics'] ClearForce offerings over the course of the calendar year."

I suspect that as smartphone vendors aim to mimic Apple's 3D Touch functionality, Synaptics' ClearForce business should enjoy a similar trajectory to its fingerprint authentication business -- up substantially for a while to come.