Please ensure Javascript is enabled for purposes of website accessibility
Log In Help Join The Motley Fool
Free Article Join Over 1 Million Premium Members And Get More In-Depth Stock Guidance and Research
By Matthew DiLallo - May 9, 2016 at 3:30PM

CEO Ryan Lance describes why the company’s portfolio is best suited for the new world of more volatile oil prices.

The oil market is currently undergoing a fundamental shift, which is forcing oil companies to map out a new way forward. According to ConocoPhillips (COP 0.89%) CEO Ryan Lance, the industry is entering a new world of "lower mid-cycle and more volatile prices." Because of this, companies needed to have the right portfolio in order to create value over the longer term. Here's why Lance believes ConocoPhillips already has the right portfolio mix for what lies ahead.

Having the right portfolio foundation
Lance started off the company's first-quarter conference call by pointing listeners to the following slide from its most recent investor presentation, initially directing attention to the left side of the slide: 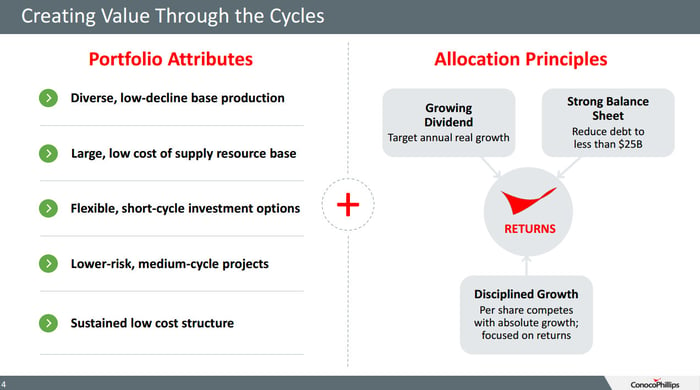 We believe that our value proposition lies in the combination of our unique portfolio attributes and our capital allocation principles. ... Underlying our value proposition is a portfolio that we think is quite unique among E&Ps. We have listed several attributes that distinguish our asset base. We have a diverse, relatively low-decline base of production. We expect our decline rate to moderate somewhat over the next few years as we bring on additional tranches of low to no decline oil sands and LNG projects.

Lance focuses on the strength of the company's portfolio noting that it is built upon a foundation of low-decline base production, largely due to the investments the company made over the past few years to develop three projects in particular, which are its FCCL oil sands joint venture with Cenovus Energy (CVE 1.27%), its Surmont oil sands joint venture with Total (TTE 0.02%), and its APLNG joint venture in Australia. These three major projects provide the company with very low-decline base production that's set to expand over the next few years as these projects continue to ramp up.

Having the right portfolio growth options
In addition to that strong base, ConocoPhillips' portfolio is structured in such a way that it can grow production when conditions warrant growth. That growth will come from two sources, the first of which Lance noted by saying:

Growth will come from investments in our large low cost of supply resource base. We continue to analyze and calibrate this resource base as we believe it holds profitable investment inventory to...keep flat production or grow modestly for well over a decade.

The company's FCCL partnership with Cenovus Energy is a great example of this because the partners have taken a manufacturing approach to growth, with the companies moving forward with smaller phases almost every year. Currently, the partners are working on Phase G at Foster Creek and Phase F at Christina Lake, with additional phases in the pipeline. Furthermore, there are ample opportunities outside these two projects including several phases of development at Narrows Lake. In addition to that, ConocoPhillips and Total have additional expansion opportunities at Surmont that could be given the green light after that project completes the ramp-up of its much larger second phase. These opportunities alone could be staged in such a way to enable the company to keep its production flat or grow it modestly.

However, ConocoPhillips has another opportunity set from which it can drive growth in the future. Lance noted this opportunity by saying:

Within this captured resource base, we have a mix of flexible, short-cycle projects and lower risk, medium-cycle investment projects. We see a role for both of these types of assets in our portfolio.

Those flexible, shorter-cycle projects that Lance is referring to are the large portfolio of unconventional shale drilling locations the company holds in the Eagle Ford, Bakken, Permian Basin, and Western Canada. The flexibility of these resources is currently on display, with ConocoPhillips significantly reducing its rig count over the past year in light of weak oil prices. However, because shale drilling is shorter in cycle, ConocoPhillips can quickly ramp up its activities in these areas when the price of oil improves, and then ramp its investments back down when oil retreats. This optionality is a big competitive advantage that the company has at its disposal in the future.

Investor takeaway
It's this combination of a strong low-decline foundation as well as both short- and medium-cycle growth that makes ConocoPhillips unique. That's because most of its peers, including Total and Cenovus Energy, are overly reliant on either longer-cycle assets thus limiting their overall flexibility, or on shale, which is much higher-decline production, making it harder for these companies to maintain a steady rate of production during a low point in commodity prices. ConocoPhillips, on the other hand, believes its portfolio offers the best of both worlds, making it ideally set up for the new world of increased oil price volatility.