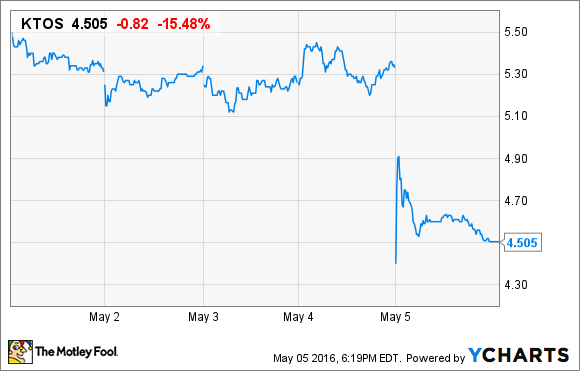 Well, that was certainly unpleasant.

And that was the good news.

The news gets worse

From a cash-profits perspective, free cash flow for the quarter was negative $13.6 million, nearly three times as bad as the $4.7 million in cash burnt one year ago. According to the running tally kept by S&P Global Market Intelligence, Kratos has now burned through $46.8 million in negative free cash flow over the past 12 months -- a period in which the company reported earning net profits of $13.8 million.

So where did all the cash go? Management explains that it is continuing to make "significant discretionary internally funded investments" to develop new products, such as unmanned aerial vehicles (UAVs), with the aim of winning significant new contracts from the Pentagon. And to an extent, these investments seem to be bearing fruit.

Kratos confirmed that it has won two out of "three new high performance tactical UAS program opportunities which the company was competitively pursuing" and is still in the running to win the third. The company said "customer confidentiality obligations" prevented it from specifying what the first award was for, but the second was the DARPA Gremlins competition, for which Kratos says it has received a $3.9 million contract.

Reading between the lines
And the third UAV contract Kratos is aiming for? That's also not clear. At first, I thought this referred to Kratos' highly touted, yet still quite secret-on-the-details, effort to build an unmanned combat drone that it's calling the "UTAP-22 Tornado." But in its earnings release, Kratos talked about UTAP as a project entirely separate from "a third new high performance tactical UAS program opportunity which we hope to be successful on in the near future."

If that's the case, then Kratos may well have four big UAV contract opportunities in its gunsights -- and it's already won two of them.

What it means to investors
Guiding on what to expect over the rest of this year, Kratos is short on numbers, but long on rosy predictions of the opportunities that lie ahead.

"We are also currently in pursuit of certain new, large opportunities in Kratos' Unmanned Systems, Satellite Communications, Technology, Training and Microwave Electronics business areas, including an additional expected UAS award, a large new unmanned target drone system opportunity we are currently in contract negotiations on, a new expected to be sole source unmanned drone system opportunity, and an exciting additional opportunity currently expected to be awarded late this year," management assures us.

All of which sounds very optimistic. Yet the situation facing investors today basically boils down to this: You cannot buy Kratos based on its numbers. The company's revenues are declining, its profits nonexistent, and its cash is on fire (figuratively, at least). As a result, the company cannot be accurately valued at this time.

I don't know about you, but that's just too many "ifs" for my taste.