Please ensure Javascript is enabled for purposes of website accessibility
Log In Help Join The Motley Fool
Free Article Join Over 1 Million Premium Members And Get More In-Depth Stock Guidance and Research
By Adam Levine-Weinberg - May 9, 2016 at 1:35PM

Delta stock got caught up in a broader airline sector rout.

What: Nearly every major airline stock fell last month, as a series of airlines projected that unit revenue would continue to decline at a rapid rate during Q2. Delta Air Lines (DAL 1.90%) stock got caught up in the airline sector rout, falling 14.4% during April, according to data provided by S&P Global Market Intelligence. 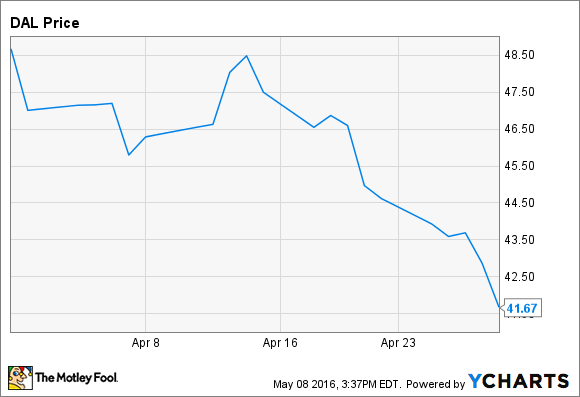 So what: Passenger revenue per available seat mile (PRASM) fell 4.6% year over year at Delta last quarter. That was slightly worse than the company's guidance for a 2.5%-4.5% decline.

However, Delta's revenue performance compared favorably to that of its two closest rivals: American Airlines (AAL 3.55%) and United Continental (UAL 2.88%). During Q1, American and United both reported PRASM declines in excess of 7%.

American Airlines and United Continental aren't expecting any meaningful improvement in their PRASM performances this quarter. American expects PRASM to be down 6%-8% year over year in Q2, while United projects that PRASM will fall 6.5%-8.5% year over year.

By contrast, Delta Air Lines' guidance for a 2.5%-4.5% drop in Q2 PRASM implies that its revenue performance will improve somewhat sequentially. Delta estimates that PRASM fell about 4% in April. This suggests that it is on track to hit its guidance, because unit revenue comparisons will get easier over the next few months.

Now what: Delta's dreadful stock performance last month seems like a case of mistaken identity. Investors dumped shares of American Airlines and United Continental due to their steep Q1 PRASM declines and equally weak PRASM guidance. Many investors seem to have treated Delta as if it were no different than these two competitors.

However, Delta's PRASM performance wasn't nearly as bad as its peers'. Furthermore, it is on track to move PRASM back toward the flat line over the next few quarters. As a result, analysts expect Delta's earnings per share to soar 46% year over year in Q2 and 42% for the full year.

Delta is expected to produce further EPS growth in 2017, albeit on a more modest scale. Despite this rosy profitability outlook, Delta shares trade for just 6.4 times the company's projected 2016 EPS. That's an incredibly low asking price for this high-quality airline stock.