Please ensure Javascript is enabled for purposes of website accessibility
Log In Help Join The Motley Fool
Free Article Join Over 1 Million Premium Members And Get More In-Depth Stock Guidance and Research
By Brian Orelli, PhD - May 9, 2016 at 7:21PM

The spec pharma meets its expectations.

Of course the jump is all relative, as the company dropped Friday in anticipation of the earnings report. The stock traded higher than it closed today as recently as last Tuesday.

So what: The ironic part of the down-then-up stock movement is that Horizon Pharma had already released preliminary revenue guidance, stating that about 19% to 20% of its expected 2016 sales of $1.025 billion to $1.050 billion would come in the first half. Do the math and you get revenue between $195 million and $210 million. 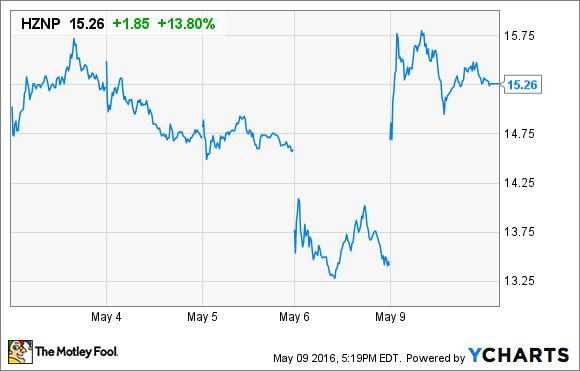 First-quarter sales came in at $205 million, pretty close to the midpoint of that range. The 81% year-over-year increase was driven by sales of Krystexxa and Ravicti that it acquired from Crealta Pharmaceuticals and Hyperion Therapeutics respectively as well as Pennsaid, which saw sales more than triple year over year.

Now what: It's all about acceleration for Horizon Pharma. Management expects 57% to 59% of its 2016 net sales to come in the second half of the year. And 2016 adjusted earnings before interest, taxes, depreciation and amortization (EBITDA) are expected to accelerate even faster with 64% to 66% of the $505 million to $520 million coming in the back half of the year.

If Horizon can hit those numbers, investors will be seeing more up than down days.