Please ensure Javascript is enabled for purposes of website accessibility
Log In Help Join The Motley Fool
Free Article Join Over 1 Million Premium Members And Get More In-Depth Stock Guidance and Research
By Daniel B. Kline - May 10, 2016 at 3:35PM

The company has completed its purchase of some former Verizon wireline territories, but the big challenge is ahead.

Frontier (FTR) had a respectable first quarter of 2016, gaining some broadband customers while dropping a few video subscribers. It lost $186 million on $1.35 billion in sales, but that was due to interest expenses and costs related to its $10.54 billion purchase of Verizon's wireline business in California, Texas, and Florida.

That purchase -- which closed on April 1 -- was the real story of the quarter and the highlight of the company's call with investors after it released earnings. CEO Dan McCarthy made the Verizon purchase, which gives Frontier 3.7 million new voice connections, 2.2 million added broadband connections, and 1.2 million more pay-television customers, the focus of the call and his remarks in the earnings release.

We see enormous opportunity in these new markets with millions of new customers. In addition to increased scale, these areas are each very attractive with significant growth potential.

That's a restrained way for the CEO to say his company has gone all-in buying these properties from Verizon, and now it needs to make them pay off.

So far, mostly so good
McCarthy talked during the earnings call about the actual switch of the subscribers from Verizon to Frontier. Called a "flash cut," the CEO explained that it was the "largest and most complex flash cut that has ever been executed in our industry," according to the call transcript. He added that it was "very successful," and noted that his company used its previous experience with "cutovers" to "strengthen [their] processes and minimize service interruption."

Of course, moving millions of customers to a new system presents major challenges, and this move was not entirely without its problems. But McCarthy said issues related to the changeover affected less than 1% of customers. He comments on how Frontier addressed these challenges on the call.

As we moved through the initial transition period, we identified and addressed a number of issues with imperfect data extracts and network complexities. We were able to modify our business practices and conduct additional rounds of employee training immediately because of our extensive preparation and the contingency procedures we have developed.

He noted that doing that did result in some delays in responding to customers, which subsequently resulted in "some negative publicity in the market."

The CEO sees big things
In addition to adding customers by purchasing these territories, McCarthy sees big opportunities to grow what his company has bought, and aspires to increase business in all Frontier's markets.

In addition to increased scale, they each have significant growth opportunity. California, Texas, and Florida are projected to account for nearly half of the U.S. population growth over the next decade. We're expanding into these markets with leading-edge capabilities, including networks that are 55% FiOS enabled.

That expansion fits into the company's overall plan to upgrade its video offering and expand its reach. Currently, the company can only offer pay television to slightly over 30% of the 14.5 million customers in its current footprint. McCarthy expects to grow that to over 50% by the end of 2016. "We believe that the expanded reach of our video capability will help us attract new customers to Frontier for both video and broadband service," he said. 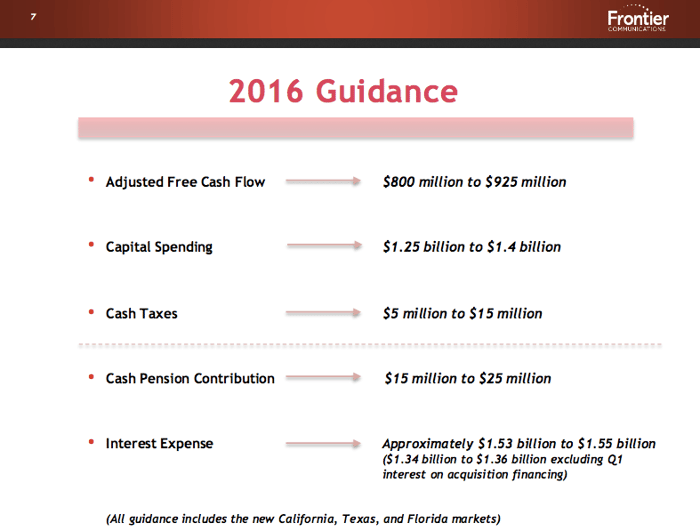 It's a bright, but risky path
Frontier has an opportunity to grow, but it has not proven its ability to do that. The company struggled when it first entered the Connecticut market by buying AT&T's wireline business, and its growth numbers have been tepid overall. Frontier did add almost 25,000 broadband customers in Q1, but it lost 5,800 video customers, which follows the slow bleed pattern that has been evident in recent quarters.

Buying the Verizon properties creates a big opportunity for Frontier, but to make its investment pay off, it will have to at least hold onto those customers, if not grow its user base. The relatively smooth technical transition suggests that the company has learned from its past, but avoiding growing pains when doubling in size will present a big challenge.

Frontier now has what it promised investors -- a bigger subscriber base to spread out costs and create more opportunity for growth -- now it just has to deliver. There's reason to believe that's what will happen, and McCarthy has given shareholders cause to be confident.