Please ensure Javascript is enabled for purposes of website accessibility
Log In Help Join The Motley Fool
Free Article Join Over 1 Million Premium Members And Get More In-Depth Stock Guidance and Research
By Nicholas Rossolillo - May 10, 2016 at 8:02AM

Americans have a little extra spending money in their wallets. Are they using it on their mode of transportation?

For the better part of two years now, Americans have been enjoying substantially lower gas prices. That extra savings at the gas pump adds up when you consider the millions of drivers across the country. Has it altered the trend in auto purchases? Are U.S. automakers benefiting as a result? And what could happen if prices at the pump go back up?

Let's start by comparing the numbers over the past few years:

Auto sales have been on a steady increase, while the price of gasoline has been decreasing since 2014. In fact, auto sales exceeded $950 billion in 2015, up 7.4% from 2014, a year in which the average gas price in the U.S. was under $2.50 a gallon for the first time in a decade. It's also interesting to note that auto sales and gas prices follow a similar cyclical pattern, rising in the summer months and falling during the winter months.

Is there a correlation between the downtrend in gas prices and in U.S. automaker revenue and profit? Here are charts showing total revenue and profit for the U.S. "big three": General Motors (GM -1.99%), Ford Motor (F -2.72%), and the old Dodge and Chrysler names now reorganized under Fiat Chrysler (FCAU). 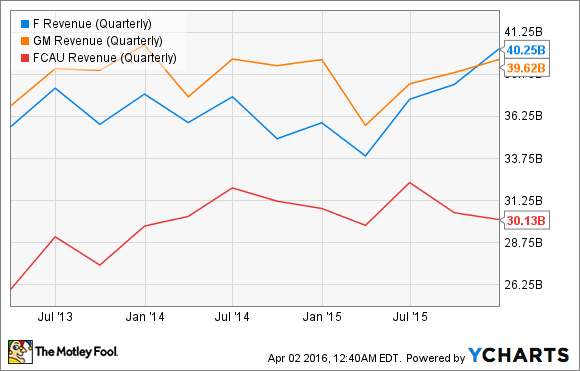 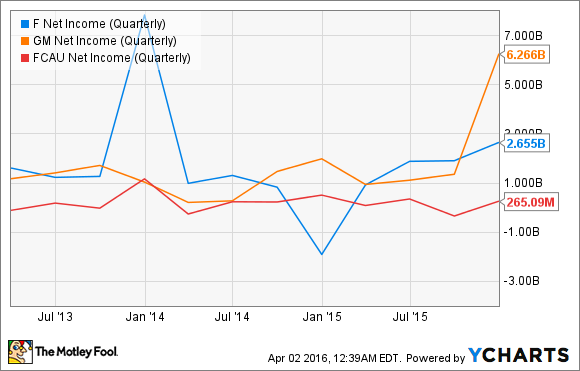 While it's not as pronounced as the seasonality of gas and overall auto sales, the three biggest U.S. automakers also show a bit of a seasonal trend in revenue. Moving to net income, or bottom-line profit, this metric seems completely uncorrelated to gas prices up until the past year and a half. As energy prices have cratered, profit for Ford and GM has seen healthy increases. Could the rise in profit be related at all to the American budget on fuel?

Let's focus our attention on Ford and GM, the two out of the "big three" that are still headquartered in the United States. What reason have the companies given for their rise in profit lately?

The obvious answer is a strong rise in sales. In fact, both companies have been posting record monthly sales over the past year. What specifically has been leading the way? Trucks and SUVs.

In 2015, Ford saw an 8.3% rise in sales for trucks and SUVs, while car sales fell by 1%. GM's numbers were more pronounced, notching a 16% rise in truck and SUV sales and a 14% fall in auto sales. So far this year, the trend continues. March 2016 sales results released on April 1 for GM reported strong gains for cars in the Chevrolet unit, up 8% year over year. Besides that, sales gains came primarily from trucks and SUVs. GMC truck and SUV sales were up 13% from last year, Buick sales were up 9%, led by the Encore SUV, and Cadillac saw Escalade deliveries increase by 12%. This builds on a February where SUV sales increases led the way again, with most models posting double-digit increases over 2015.

Ford saw similar results to those of GM in March. Ford truck sales saw a 9% year-over-year increase, and SUVs were up 16%, while cars increased only 1%. Ford also reported that SUV sales have increased revenue per vehicle by an average of $1,600. All of this comes after a record February where SUV sales increased 22% year over year.

There certainly seems to be a correlation between cheap gas prices and Americans' auto purchasing habits. As a result of the higher sales rate of expensive SUVs, automaker revenue and profit has seen an increase. What would happen if gas prices turn around and start heading higher?

I tend to think that Americans will trend away from trucks and SUVs again if gas prices start heading higher. Ford seems to agree. In its fourth-quarter 2015 earnings release, the company gave a long list of risk factors that could adversely affect business. At the top of that list were "a market shift away from sales of larger, more profitable vehicles" (read: trucks and SUVs) as well as "an increase in or continued volatility of fuel prices." These side-by-side statements would seem to indicate an admission that low fuel prices have spurred on the purchase of less-than-fuel-efficient vehicles, and a reversal in the purchasing trend is possible.

Assuming gas prices stay low through the year, I believe automakers in the U.S. will continue to benefit. After that, the picture looks a little murky. With sales sensitive to such an unpredictable factor as prices at the pump, it is logical to assume that revenue could fall if we saw a rise in fuel costs. Bottom-line profit is also sensitive to fluctuations in revenue and type of auto sales, as seen in the second chart above. It will be interesting to see how Ford and GM handle a rise in fuel prices, how Americans' purchasing preferences change, and what the profit margins are on those vehicles. For the time being, while record sales continue to roll in, I think automakers are worth consideration.