Please ensure Javascript is enabled for purposes of website accessibility
Log In Help Join The Motley Fool
Free Article Join Over 1 Million Premium Members And Get More In-Depth Stock Guidance and Research
By Daniel B. Kline - May 10, 2016 at 8:35AM

The company posted some impressive growth and has a very positive forecast for the months ahead.

ServiceNow (NOW 0.57%) had a great start to 2016 and its first quarter earnings report sent its stock price flying.

What: After closing March at $61.18, shares in the company actually climbed fairly steadily throughout April. They spiked however on April 21 after the company reported 44% year-over-year growth in revenue after the market closed on April 20. The company's stock jumped to $74.27 the day after the earnings report before settling back to Earth a bit to close April at $71.48, a nearly 17% gain for the month, according to data provided by S&P Global Market Intelligence. 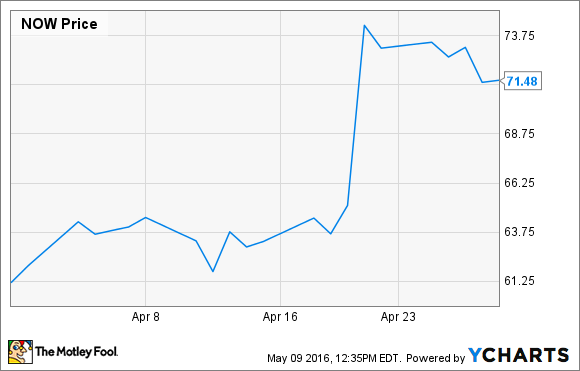 So what: Investors clearly like the growth story ServiceNow is telling. The company grew revenues dramatically and it made a little bit of money ($0.01 per diluted share) on a non-GAAP basis (which the company fully explains in its earnings release). On a GAAP basis it increased its loss from $58.1 million in the same quarter last year to $333.3 million in Q1, 2016, but that did not seem to deter investors.

Now what: ServiceNow has set the bar high for the rest of the year. The company forecasts growing total revenues between $1.35 billion and $1.38 billion, which would be year-over-year growth between 35% and 37%. That assumes total billing of approximately $1.6 billion, a growth rate of 33% with subscription billing accounting for the bulk of that at roughly $1.42 billion, for year-over-year growth of 37%.

Those are big numbers and keeping (and building on) these share price gains requires that the company hit these aggressive numbers.

CEO Frank Slootman is confident in the numbers after the way the company started its year.

"We're off to a strong start with our best first quarter ever," he said in the earnings release. "Strong upsells and traction with our emerging products were two key growth vectors during the quarter."

The signs look good and subscription-revenue generally builds months after month. ServiceNow has a ways to go, but Q1 was a big sign that it's pointing in the right direction.