Please ensure Javascript is enabled for purposes of website accessibility
Log In Help Join The Motley Fool
Free Article Join Over 1 Million Premium Members And Get More In-Depth Stock Guidance and Research
By Nicholas Rossolillo - May 10, 2016 at 3:56PM

The company best known to Americans as the owner of Jaguar Land Rover is on a hot streak. Here's what investors should know.

Since mid-February, shares of India's largest auto manufacturer, Tata Motors (TTM -1.09%), have been on a ridiculous run. The company's stock has been lifted by a rising tide since the horrific start to 2016. Stock markets around the world, especially emerging-economy stock markets such as India's, have rebounded strongly from first-quarter lows. Here's a look at the stock's run, as well as the broader Indian stock market's run, as measured by the ETF iShares MSCI India. 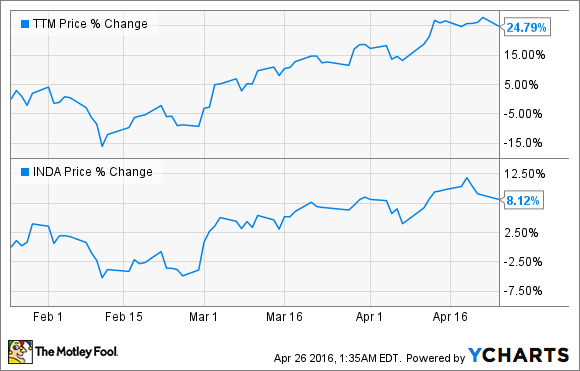 Besides a general rise in the Indian stock market, Tata has had strong sales growth lately. Sales got hit for both Tata and Jaguar Land Rover during the 2014-2015 fiscal year, largely due to economic weakness and a growth slowdown in Asia. Sales have started to rebound in 2015-2016, especially in the first quarter of 2016, and Jaguar Land Rover saw double-digit growth over the previous year. Tata has cited new product-line releases and a pickup in Asian economic growth for its run so far this year, and strong sales in North America and Europe account for most of the growth in the Jaguar Land Rover division.

The overall growth in the Tata division is worth exploring further. Domestic sales of passenger vehicles slumped by 44% in March, and total passenger vehicle sales fell by 6% from the previous year. This performance was offset in a large way by domestic commercial vehicle sales, up 20% in March and 3% for the year, and exports, up 17% in March and 16% for the year. While the company has benefited in developed markets with Jaguar Land Rover, the Tata division has been a drag on business performance. Sales of vehicles in the Tata division are largely dependent on Asia, as sales are basically nonexistent outside India, China, and a few other Asian countries.

It appears sales in the Tata division could be picking up, if the first three months of the year are any indication. In addition, the company reported a strong increase in year-over-year and month-over-month production of vehicles during the same period.

Why the huge change in production around the first of the new year? It seems it can be partially attributed to the new annual budget that the Indian government and the Reserve Bank of India released in January. The budget looks to target infrastructure improvements, especially within the farming sector: the building of new roads, expansion of the national highway system, and support for the development of railways. To that end, the National Investment and Infrastructure Fund was proposed to help raise money from investors for the government to use in the construction of the proposed improvements.

All of this is great news for the Indian auto manufacturer. Most of the growth in sales and the production increases in recent months are from municipal vehicles used for construction and hauling. While passenger vehicle sales are essentially flat over the past few years, this uptick in larger industrial equipment is now leading sales higher. With the Indian government betting on transportation infrastructure expansion, Tata Motors is well positioned as the country's largest auto manufacturer to provide both the means to build the infrastructure and the low-cost vehicles to fill those roads and highways up with traffic upon completion.

Could this trend continue for the company? The current budget stretches well into 2016, and the production numbers released by Tata don't seem to be showing any sign of weakening. The company recently concluded its fiscal year, and investors should look to see how those sales gains translate into profits. Analysts think that total sales will increase over 15% in the coming year, and this will translate to a doubling of profit over 2015's. With a strong pipeline going into the new fiscal year and the support of the Indian government and reserve bank, I like Tata Motors' chances at pulling off those numbers.