In many ways, Ritchie Bros. Auctioneers (NYSE:RBA) is the eBay of heavy machinery. Its auction service helps equipment sellers obtain the highest net return on the sale of their equipment and trucks by using its experience and global bidding audience. The company has a dominant position in the market, and there's plenty of growth to be had, as the industry is extremely fragmented. For instance, used equipment is estimated to be more than a $360 billion market annually, and Ritchie Bros.' leading market share reaches only about $4.2 billion of that amount.

The long-term future growth opportunity looks enticing, and its first quarter of 2016 was solid. Here are some key figures.

Ritchie Bros. posted more than $1 billion of gross auction proceeds during the first quarter, which was the first time the company had topped that mark during a Q1. Revenue jumped 14% compared with last year's period, to $131.9 million, well ahead of analysts' estimates of $115.4 million. Revenue would have checked in about $3 million higher if foreign exchange rates had remained consistent with values in 2015. 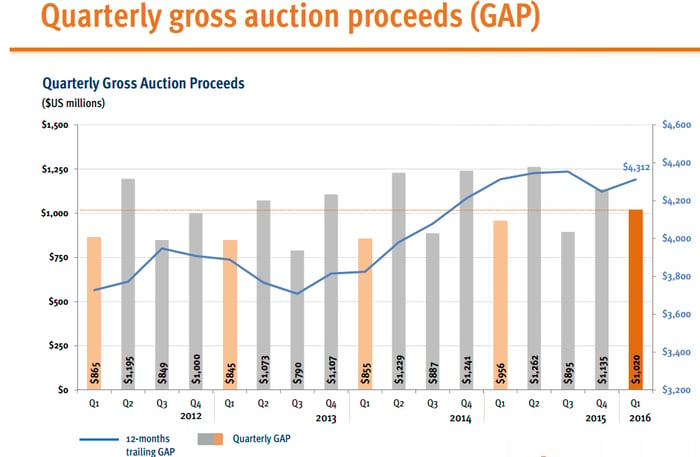 That increase on the top line filtered down to the company's bottom line, too, with Ritchie Bros. posting net income attributable to shareholders of $29.4 million. That was a strong 24% increase compared with last year's first-quarter net income of $23.8 million. In all, diluted earnings per share checked in at $0.27, a 23% increase from last year's first quarter and well above analysts' estimates of $0.21 per share.

Looking closer at the balance sheet, we see that operating free cash flow increased 20% year over year, to $205.5 million, during the 12 months ended March 31. Also rising was return on invested capital, which moved 250 basis points higher to 16.7% for the same time frame. Investors should note that it's wise to judge those results on a trailing-12-month basis, rather than quarterly, because of the seasonality of the business.

One great factor for Ritchie Bros. is that its online business is very scalable, as a website can reach around the globe without a huge cost increase. The company has taken large steps toward improving its online auctions, and those online buyers now represent about half of its total buyers and 44% of gross auction proceeds.

Proof that the business is scalable: Its reported revenue grew at twice the rate of sales, general, and administrative expenses during the first quarter -- 14% revenue growth versus 7% expense growth.

I'm proud of the efforts of the entire Ritchie Bros. team during the first quarter, as we increased GAP by 7% and revenues by 14% compared to the first quarter last year, a significant achievement in light of tough comps. Most of our geographies contributed to this strong performance, most notably Canada, Australia, the Middle East, and Mexico. We also experienced growth in all of our key sectors including construction, transportation and agriculture. Our strategy of diversifying into new sectors, geographies, channels and services is working to drive value for customers and shareholders. We're pleased that our EPS for Q1 2016 grew 23% versus prior year.

Investors should expect the company to continue its consistent dividend growth and repurchase enough shares to offset dilution, but don't expect a large repurchase program, as growth initiatives are a higher priority currently. Ritchie Bros. appears to have plenty of room for growth in such a highly fragmented market. Don't be shocked if the company continues to find worthy businesses to acquire. For investors, hopefully the company's year-to-date share price increase of 27% is the beginning of a new trend.