Please ensure Javascript is enabled for purposes of website accessibility
Log In Help Join The Motley Fool
Free Article Join Over 1 Million Premium Members And Get More In-Depth Stock Guidance and Research
By Travis Hoium - May 11, 2016 at 4:45PM

With its finances looking shaky, the market is starting to lose faith in SolarCity -- and liquidity problems are precisely what doomed SunEdison.

Evoking SunEdison's name when talking about SolarCity (SCTY.DL) may seem a bit over-the-top, considering that SunEdison recently filed for bankruptcy. But less than a year ago, SunEdison was the biggest renewable energy company in the world, a hedge fund favorite, and sported a $10 billion market cap. 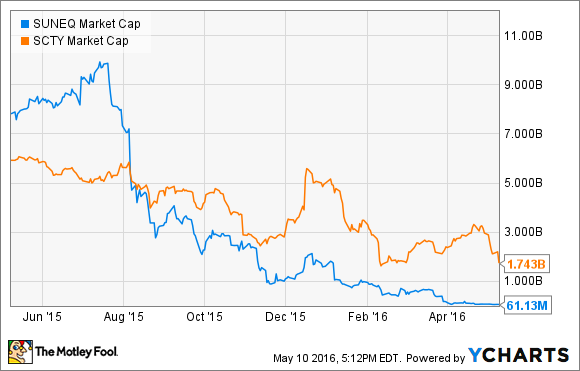 Financing isn't always as easy as it seems

Looking back, one key mistake SunEdison made was assuming it would always have funding for its renewable energy projects. It launched yieldcos TerraForm Power (TERP) and TerraForm Global (NASDAQ: GLBL) to buy the projects it built, and it expected it could follow that model indefinitely. The idea was that the yieldcos would issue a combination of new debt and new equity periodically that would be so low in cost that they could then turn around and buy accretive projects from SunEdison as a way to grow and increase their dividend. That worked -- until the dividend yields of both surged into double digits, making issuing new capital an unfeasible way to grow. That's what started the downward spiral for SunEdison. It lost its main source of cheap project liquidity, debt costs soared, and soon, the company was bankrupt.

SolarCity isn't in as dire a situation today, but it's just as reliant on financing. Consider that in its latest earnings presentation, management touted that it has issued $1.1 billion in new project financing so far in 2016. If we assume the company is going to build 1.1 GW of solar projects for an average price of $2.80 per watt in 2016, it will need need far more than this amount to make it happen. How much? Try $3.1 billion in financing for the year.

It's easy to say that SolarCity should have no trouble continuing to finance its projects in the same way it has so far -- and that's possible. But SunEdison also thought its sources of financing were safe, right up until the moment they weren't.

A sign of the changing solar landscape is SunPower being even more bullish on its residential business than SolarCity was. Image source: SunPower.

This is where we get to SolarCity's similarities with SunEdison, and why its situation is so different from those of First Solar (FSLR -1.05%) and SunPower (SPWR -0.48%).

As was the case with SunEdison, SolarCity wants to keep all of the projects it builds on its balance sheet. Part of its value proposition for investors is that it has 20 to 30 years of cash flows under contract. SunEdison sold the same story with its ownership of yieldcos and the associated incentive distribution rights (i.e., the payments those yieldcos would make to SunEdison based on dividend growth).

But SunEdison backed itself into a corner when it came to financing. When the yieldco model fell apart, it tried to turn to third-party sales, only to discover that the market wasn't willing to pay what it wanted for projects -- and it certainly wasn't after it became clear that SunEdison's business was in trouble.

Like SunEdison, SolarCity sells the value from its projects in pieces, with the tax equity portion (all of the tax benefits and a small amount of cash flow) usually going to one group of investors, and securitized cash flows going to another. In the first quarter of 2016, $1.57 per watt of financing for projects came from tax equity and cash rebates or prepayments while $1.64 per watt came from "other asset financing." And it's that "other" portion that investors should focus on.

SolarCity's original plan was to sell the cash flows from its solar projects to investors in the form of asset-backed securities. These would be secured by contracted solar payments, and carry no risk to SolarCity, even if its customers didn't pay. But, as I highlighted earlier this year, the cost of asset -backed securities has soared for SolarCity since it began selling them in 2013.

Because of those rising costs, SolarCity recently turned to "cash equity financing." The first deal was a $227 million facility with John Hancock Financial that included cash flow and solar renewable energy credits from 201 MW of solar projects. In theory, this is a great solution, but it monetizes almost all of the cash flows in the next 12 years (as you can see on the graph below), meaning the projects in the portfolio provide no benefit to the company outside of the upfront cash from financing. If financing for the next round of projects dries up, it could be a big problem. 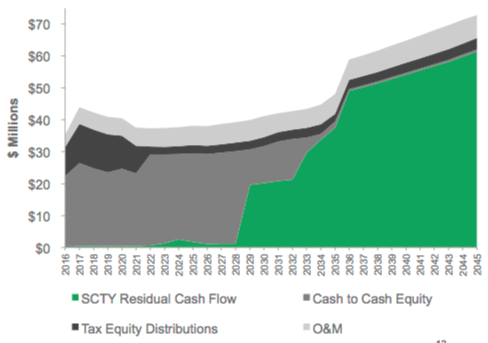 Contrast this with First Solar and SunPower, which sell solar panels (generating cash), sell projects to third parties (generating cash), have sold portions of projects to strategic investors, and even drop some projects down to their yieldco, 8point3 Energy Partners. On top of that, they can plan large-scale projects years ahead of time, and both have enough cash on their balance sheets to cushion them against any shocks to the market. This isn't to say that they aren't dependent on financing to survive, they're just less dependent on a continual flow of financing than SolarCity. For both companies, flexibility is the name of the game. 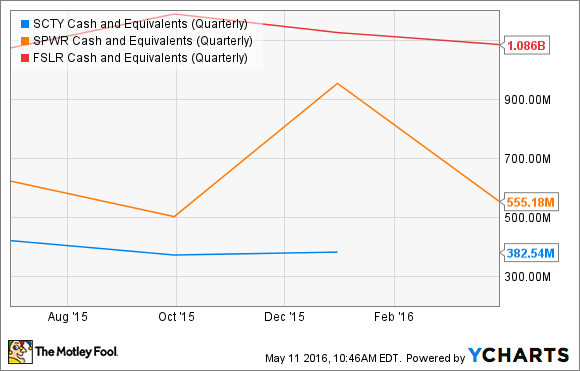 Compare that to SolarCity, which $361.7 million in cash on the balance sheet at the end of the first quarter, enough to fund operations for a little over a month if financing dries up. That's not much cushion.

Slow down and smell the roses

This brings us to why the market is so worried about SolarCity, and why Jim Cramer says the company is in a "first-class crisis." As I've outlined above, SolarCity has very little wiggle room in funding its operations, and is reliant on continual new financing from a fairly small number of sources, just like SunEdison was. Now, it's begun a trend of missing its own installation guidance, its sales costs are out of control, and management says it still wants to accelerate growth in the near future. In my opinion, SolarCity needs to slow down and prove it can be a consistent business with positive cash flows before it starts to think about growth again.

If SolarCity can't deliver on the targets it sets for itself investors will begin losing confidence in the company. And given its constant need for new financing, confidence is absolutely essential to SolarCity's business model. Now, with management indicating that growth is more important than building a fundamentally strong cash-flow-generating business, investors are naturally starting to get worried.

SolarCity isn't in SunEdison's dire situation yet, but few companies see the financial cliff they're headed toward until it's too late. A downward spiral can happen quickly in solar if your financing partners lose confidence. And SolarCity isn't giving investors many reasons to be confident today.