Please ensure Javascript is enabled for purposes of website accessibility
Log In Help Join The Motley Fool
Free Article Join Over 1 Million Premium Members And Get More In-Depth Stock Guidance and Research
By Travis Hoium – May 12, 2016 at 4:07PM

Wynn Palace, which is currently under construction in Macau. Image source: Wynn Resorts.

Steve Wynn doesn't give a lot of interviews, so when he talks on conference calls with analysts each quarter, investors should pay attention. There are a lot of changes taking place at Wynn Resorts (WYNN 2.76%) ; here are my five biggest takeaways from the conference call with management after the first quarter (transcript from Seeking Alpha).

Will Wynn Palace in Macau be able to stand out?

The $4.1 billion Wynn Palace in the Cotai region of Macau will open this summer, and it should be a transformational property for the company. But analysts were wondering how it will stand out versus the competition. Steve Wynn doesn't think that will be a problem, saying:

This place has a different -- a level than Bellagio, Wynn Macau, Wynn Las Vegas or Encore Las Vegas. This is a different place. So it is designed in every single element to appeal to that part of the market that goes from a 1,000 unit average bet of Hong Kong dollars to 1 million.

The larger point was that Wynn is selling to customers looking for exclusivity, and are willing to pay for it. He isn't after the mass-market players who Melco Crown (MLCO 4.64%) or Las Vegas Sands (LVS 1.06%) have targeted with their new resorts, including thousands of hotel rooms. Like Las Vegas, he wants high rollers and premium mass-market players who are willing and able to pay for the experience Wynn provides.

Will there be table games?

After Melco Crown's Studio City was only given 200 table games when it opened -- less than the 500 or so it expected -- there was concern that Wynn Palace would get the same treatment. Complicating matters is Las Vegas Sands' The Parisian, which will open later this year. If the government wants to limit table-game growth, the resorts may have to split the year's allocation. When asked about table-game allocation, Wynn had this to say:

We have a positive expectation, but no guarantee. So I think it is probably good to stay away from that because I wouldn't want to be perceived as putting myself in the government's shoes.

I'm not sure if that's reassuring, but it's the closest we're going to get to an answer to the table-game question until probably shortly before the casino opens. 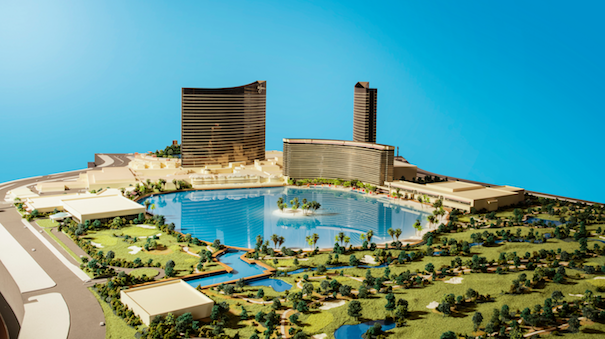 Paradise Park is getting more audacious

Wynn recently started talking about the next stage of development in Las Vegas, known as Paradise Park. Early renderings (above) show a lake with a beach, and a hotel addition with about 1,000 rooms. But since then, the plans have gotten bigger:

In the middle of this 1,300 by 2,000 foot piece of water is a mountain, an island, that is eight to 10 stories tall -- but it is an irregular topography. It is a slope up to two twin peaks that are connected with a rope bridge. And built into the side are cabanas and other special-effects platforms, some of which are going to be occupied in the daytime by people, and very luxurious premium kinds of recreational spots. And then there is a beach bar with white sand. And then from our convention center on the north there are zip lines that take people to the bar, and from the side of the mountain there are zip lines that take them back the other way.

Steve Wynn hasn't even gotten to the planning point where he's taking the project to the Board of Directors, but it sounds like it'll be wild, no matter what ends up being built.

How to pay for a $1.5 billion project in Las Vegas

The next question is about paying for this planned $1.5 billion addition. And that's where Steve Wynn was very upfront about his plans.

I am going to charge every single person $20 to $30 to experience Paradise Park whether I do it as part of the room charge, as a resort fee per night, or whether I do it for people coming in off the street -- part of those 118,000 people a day that are visiting the town. I'm going to charge for it, and that is going to make this place accessible. It is $100 to go to Disneyland; we are going to charge $20. But you are talking about revenues of $300,000 or $400,000 a day if anybody shows up.

To put that into perspective, $300,000 per day would be about $110 million in new revenue for Wynn Las Vegas. That alone doesn't make the addition a great investment, but when added to hotel rooms, convention spaces, bars, restaurants, shops, and anything else that's added, you can see how it could make a lot of money very quickly.

In April, Wynn Resorts authorized up to $1 billion in a buyback program, which could be a large percentage of shares given the current $9.5 billion market cap, and the stock's recent volatility. Here's how Steve Wynn explained the move:

So we just wanted to make sure that we are properly armed in case there was something strange that happened on Wall Street and the stock market dropped, or our stock went to a level that we thought was grossly oversold we would jump on it.

Wynn went on to talk about how crazy the market is, but the broader point is that the company will buy back shares aggressively if it feels they're undervalued. If you're bullish on Wynn Resorts, that's great news.