Please ensure Javascript is enabled for purposes of website accessibility
Log In Help Join The Motley Fool
Free Article Join Over 1 Million Premium Members And Get More In-Depth Stock Guidance and Research
By Palbir Nijjar - May 12, 2016 at 12:40PM

Investors seeking yield may want to steer clear of this luxury retailer.

Last month, Coach (TPR -1.22%) reported fiscal third-quarter earnings per share of $0.40, a 25% increase from the prior year. The income growth was a positive development for the company. Coach hasn't seen positive year-over-year income growth in three years. In fact, earnings have declined nearly 67% over those three years.

Long-time Investors are able to take some solace in that the fashion retailer has paid out a $0.34-per-share quarterly dividend since mid-2013. Today the company has a very attractive 3.3% dividend yield. 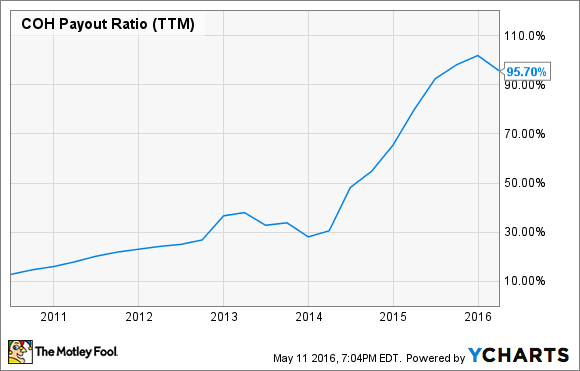 Forget that a dividend payout ratio near 100% will handcuff any company from investing in its business. A payout that high will leave very little room to pay debtholders or even run daily operations. Fortunately for Coach, the numbers look better if dividends are compared with its free cash flow.

Paying out half the cash the company generates is much more reasonable than when looking at the dividend payout compared to earnings. The reason for the disparity between net income and operating income is mainly the result of depreciation and share-based compensation, which both have a negative impact on earnings but not cash flow.

Remaining fashionable and on top of trends is a risk to any retailer. For a luxury retailer such as Coach, it's even more important. At the turn of the decade, the company went from mainly a maker of luxury handbags to a full lifestyle brand that expanded into more lines of businesses including accessories, shoes, and men's bags. The company also went downmarket to appeal to a larger target. Unfortunately, Coach's execution of its new strategy was a disaster, as it turned off a large portion of its consumer base.

Coach showed some improvement in its business this most recent quarter, but there are no guarantees it won't have more blunders in the future. Also, I don't proclaim to be an expert on business cycles, but it's not unreasonable to expect a downturn in the U.S. economy after six years of economic growth. Combined with a struggling global economy, luxury retailers such as Coach will probably feel the pain more than traditional retailers.

Should Coach lower its dividend?

With about $1.3 billion in cash on hand and as a business that generates positive free cash flow, Coach can probably survive another downturn without hacking its dividend. However, the amount of cash and earnings being allocated to a dividend is probably not its best use of funds.

In early 2015, the company announced it was taking on $600 million in debt with intent to use those proceeds for "general corporate purposes, which may include capital expenditures, working capital, repayment of outstanding revolver borrowings, acquisitions, or investments in, and funding for, our Hudson Yards development."

With the company paying nearly $400 million in dividends annually, a large chunk of that debt may have been avoided with a lower dividend payment.

A fickle consumer and an uncertain economy are two reasons you don't typically see specialty retailers as dividend aristocrats. Coach investors can receive a tempting 3.3% dividend yield. However, it's probably not wise to bank on that type of yield going forward. Coach may be an attractive investment for those looking at a turnaround play. However, investors seeking yield should probably steer clear.