Please ensure Javascript is enabled for purposes of website accessibility
Log In Help Join The Motley Fool
Free Article Join Over 1 Million Premium Members And Get More In-Depth Stock Guidance and Research
By Adam Levine-Weinberg - May 12, 2016 at 8:20AM

Sales and earnings are plummeting at Macy's, but at least it can fall back on its real estate value: a luxury Dillard's doesn't have.

Macy's poor results are a testament to the upheaval occurring in today's retail industry. Predictably, investors dumped Macy's stock on Wednesday, sending it down 15% to a new multi-year low. 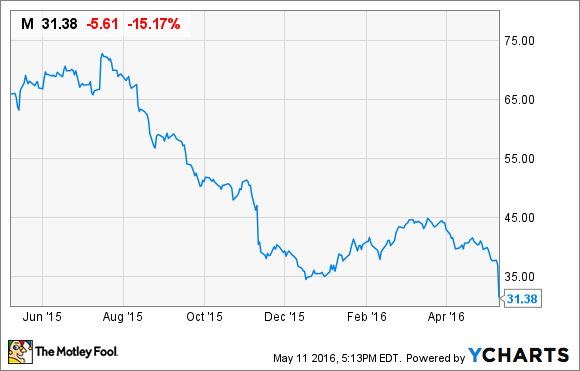 However, Macy's bad earnings report is even worse news for some of its fellow department stores. Chief among them is Southern department store chain Dillard's (DDS -2.37%).

In 2015, Macy's comparable store sales fell 2.5% year over year, including licensed departments within its stores. As a result, operating income plunged by more than half a billion dollars.

Theoretically, this weak performance should have set up easy comparisons, allowing Macy's to report a rebound in sales and earnings this year. However, Macy's didn't have high hopes -- its initial 2016 guidance called for another 1% comp sales drop and roughly flat adjusted EPS.

Even that wasn't attainable. In the middle of Q1, Macy's sales declines accelerated. For the full quarter, comp sales fell 5.6% year over year (including licensed departments), and adjusted EPS plunged nearly 30%.

As a result, Macy's further reduced its full-year targets. The company now expects a comp sales decline of 3%-4%, and it reduced its 2016 EPS guidance by 15% at the midpoint.

Dillard's 2015 performance more or less mirrored the trends at Macy's. Comparable store sales declined about 2% for the full year. Dillard's saw a big erosion in gross margin during Q4 in particular as it slashed prices to sell excess inventory. As a result, pre-tax income declined nearly 20% for the full year, while EPS fell more than 10% despite big share buybacks.

Dillard's placed part of the blame for its poor Q4 2015 results on weak demand in energy-producing regions. This makes sense, given that energy firms have slashed jobs to cope with low oil and gas prices.

Unfortunately, this could continue to be a problem in 2016. Macy's CFO Karen Hoguet stated that Texas was a particular weak spot during Q1. Dillard's is far more exposed to that market, with 20% of its store base in Texas.

Macy's has a parachute

From an investment perspective, the key thing that differentiates Macy's from Dillard's right now is real estate. In the past year or so, Macy's has gotten serious about extracting value from its vast property portfolio -- particularly for space that is under-utilized.

Starboard Value -- a hedge fund that has invested in Macy's -- has estimated the value of Macy's real estate at $21 billion. That's about 20% more than the whole company's enterprise value.

Obviously, Macy's isn't planning to sell all of its real estate and go out of business. However, over the next couple of years, it has an opportunity to generate billions of dollars in real estate proceeds -- which can be used for debt reduction or share buybacks -- without compromising its earnings potential.

By contrast, Dillard's faces all the same negative trends as Macy's with a much less valuable real estate portfolio. The company will report its Q1 earnings on Thursday afternoon. Investors have to hope that it somehow managed to stabilize its sales last quarter. Unfortunately, it's hard to be very confident in light of Macy's dreadful earnings report.