Please ensure Javascript is enabled for purposes of website accessibility
Log In Help Join The Motley Fool
Free Article Join Over 1 Million Premium Members And Get More In-Depth Stock Guidance and Research
By Daniel Miller - May 13, 2016 at 12:00PM

Hopefully Tesla succeeds beyond my wildest imagination, it would be a good thing, but there's no shortages of challenges facing the company and its investors.

The smartest man I ever had the opportunity to work for always had an impressive way of figuring things out through a handful of questions. It's a reminder the smartest person in the room isn't always the most knowledgeable about the subject at hand, but rather it's the person that understands how to ask the correct questions. He had an ability to walk into a room and within five questions would understand enough to develop a solution to the issue at hand.

In my efforts to be the best investor I can, and since learning about Tesla Motors (TSLA 1.24%), I've been asking plenty of questions to try and better understand this polarizing company's future and its potential to continue beating the market. How will these two challenges and questions impact Tesla?

China is a primary reason for many investors in many aspects of the automotive industry to remain bullish. If you're a domestic automaker, China represents a plethora of consumers eager to get their hands on the newest SUV and the country's rapidly expanding middle and upper-middle class is accelerating its luxury vehicle market. For Tesla, the country's massive pollution problem and government's desire to increase the number of electrified vehicles will be a huge opportunity. The question is: Will this play out quickly enough?

Sure, at the recent Beijing auto show more than 147 electric and plug-in hybrid vehicles were shown off. Sales of pure EVs and plug-in hybrids in China more than quadrupled to 331,092 units during 2015 -- out of 24.6 million -- making it the world's biggest market for electrified vehicles. But what if that result is a house of cards being fueled by government incentives?

Consider that the government is incentivizing green cars with subsidies of up to almost $8,500 per vehicle. In fact, according to Automotive News China, nearly all electric vehicle sales are spurred by government subsidies or perks -- those perks include exceptions from, or huge advantages in, license plate lotteries in big cities, which is a huge deal.

While rules change city to city, take Beijing for instance: the odds of winning a license plate for petrol-driven vehicles was 190 to 1 at about this time last year while new energy vehicle odds were 25 to 22. With the way the system works, people vying for a license plate to drive a gas fueled vehicle could lose the lottery for years.

Further, China's government has already spent roughly $4.6 billion on new energy vehicles (NEVs), but that likely won't last. "The appetite to spend that kind of money will dissipate pretty soon," said James Chao, Asia-Pacific managing director at IHS Automotive, according to Automotive News China. "As an EV maker, you really have to watch for what the government does next. You could be spending a lot of money on these things and end up with vehicles that don't sell."

China will remain a huge opportunity for Tesla, but if the government incentives dry up, and consumers increasingly want SUVs and crossovers, will the adoption of EVs and NEVs take place quickly enough to reward Tesla's investment?

Before Tesla's recent quarterly presentation, it was a valid question to ask if the company would need to raise additional capital. Some believed it was inevitable, and some thought it could be avoided. After the presentation when CEO Elon Musk bumped up his already aggressive plan to sell 500,000 units in 2020, by 2018, it seemed to me that it was merely a way to soften the blow of a coming capital raise.

It was kind of like throwing a dog a bone earlier than expected only to pat him on the head and say, by the way that's going to cost you. Here's a look at exactly how Tesla's outstanding shares have increased over the years. 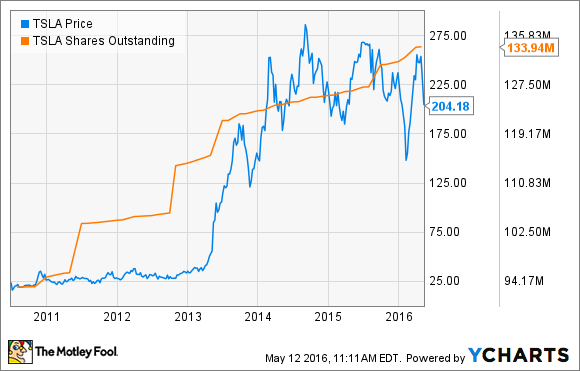 Former General Motors executive Bob Lutz told CNBC's Squawk Box, in an interview earlier this year, "[Tesla] costs have always been higher than their revenue... They always have to get more capital. Then they burn through it."

Now, to be fair, I'm not against Tesla raising capital provided it can actually meet its goals and deadlines on time. But, how likely is that? That's a question for another day. It's not hard to imagine Tesla's outstanding shares reaching 150 million-160 million, and investors should certainly ask themselves if they're willing to accept that possibility.

Ultimately, Tesla is exactly the company the automotive industry needed. It's a polarizing company, a fascinating stock, and has produced some brilliant electric vehicles -- flaws and all. I root for Tesla as a company and as an investment, but, with more questions than answers surrounding the company, I'll have to remain on the sidelines for the time being.