The only things that seemed to matter in Frontier Communications' (OTC:FTR) Q1 earnings report and call with analysts, were the statements relating to its purchase of Verizon's (NYSE:VZ) former wireline business in California, Texas, and Florida. This is unsurprising considering that the acquisition more than doubles Frontier's customer base, giving it 3.3 million new voice connections, 2.1 million new broadband connections, and 1.2 new million video subscribers.

CEO Daniel McCarthy has called the Verizon purchase "a transformative acquisition" that "significantly expands our presence in three high-growth, high-density states and improves our revenue mix by increasing the percentage of our revenues coming from segments with the most promising growth potential." It's certainly a game-changer for Frontier. Upon its April completion the company moved from a tiny niche player to a midsize competitor. That should, in theory, make it easier for the company to compete while also increasing its operating efficiency.

In his remarks in the earnings release, McCarthy laid out the expected benefits from closing the Verizon deal while noting the challenges ahead.

In addition to increased scale, these areas are each very attractive with significant growth potential. After a month of operating these properties, we are very pleased with the progress we have made, and we want to thank customers for their patience during the transition period. The entire Frontier team remains focused on cultivating growth by retaining and attracting new customers. We will continue to drive Frontier's performance to maintain free cash flow that provides an attractive and sustainable dividend payout ratio.

In light of the completion of the purchase, Frontier offered a new forecast for 2016. The company expects adjusted free cash flow in the range of $800 million to $925 million, which is impressive when you consider that interest charges relating (mostly) to the Verizon deal are forecast at $1.53 billion to $1.55 billion. 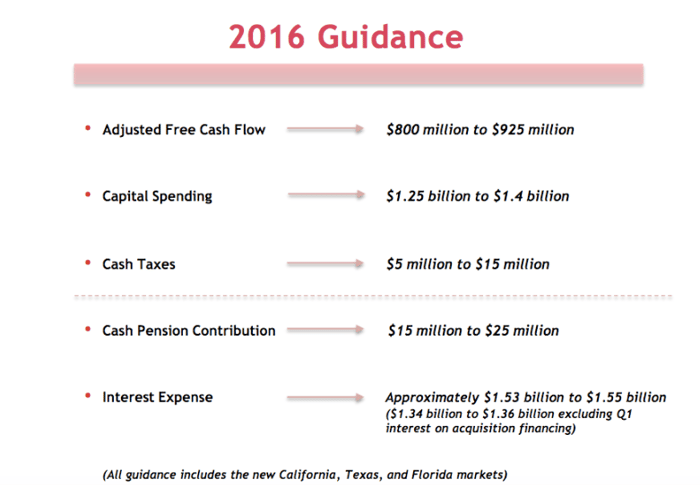 The Verizon cutover went about as well as could be expected

McCarthy explained during the earnings call that the "cutover" -- the actual process of taking possession of the customers from Verizon -- was successful. He noted that it was the "most complex flash cut that has ever been executed in our industry" and explained that the company drew on its previous experiences.

The process, however, was not entirely without problems, but the CEO felt that any issues were quickly addressed.

"As with any transfer of this scale and complexity, there were some issues at the outset, but these affected less than 1% of our customers in total and much less than that at any point in time," he explained. "As we moved through the initial transition period, we identified and addressed a number of issues with imperfect data extracts and network complexities."

McCarthy added that Frontier has since conducted more employee training but noted that the small issues "delayed the rate of reaching a normal business cadence, and as a result we were slower in responding to customers and restoring service. This disappointed some customers and resulted in some negative publicity in the market."

That's not great news, but it's encouraging that the number of people affected was relatively low. Early mistakes will make those affected wary, but if Frontier can keep service up for the vast majority of its new customers, an early hiccup shouldn't be a big problem in the long term.

It's all about customer experience and subscriber growth

Going forward, McCarthy said that Frontier has staffed up its customer-service department, and is phasing out a vendor that had been helping in that area during the transition. He does expect some short-term problems, saying that the nearly 10,000 employees Frontier added with the purchase will need time to adjust to new systems, which will "will impact the gross additions in these new operations."

But once the new team gets fully integrated, McCarthy sees a big opportunity across the company to add video subscribers. Currently, Frontier can offer pay-television in only 30% of the 14.5 million homes in its new and old territories. By the end of 2016, the CEO expects that number to be closer to 50%.

The CEO sees big opportunities for improved results in two other key areas.

"We will continue expanding our capabilities for business customers, particularly in the newly acquired California, Texas, and Florida markets," he said. "This includes developing direct and indirect channels to service the opportunities we see in these markets, and we will continue to focus on improving customer retention."

Frontier now has the territory and the customer base to become a significant player in cable and broadband. It needs to demonstrate that it can keep the customers it just bought while also adding some new ones. For shareholders, the numbers to watch in the second half of the year and all of 2017 are new customers and churn rate.

It's easy enough, or at least possible, to bring in subscribers with great promo rates, which the company used extensively when it moved into Connecticut, but keeping them is another story. If people leave quickly despite paying very low rates, that's a very bad sign. If Frontier can show growth, and retain that growth after the promo pricing expires, then it will prove that buying its way to relevance made sense.