Please ensure Javascript is enabled for purposes of website accessibility
Log In Help Join The Motley Fool
Free Article Join Over 1 Million Premium Members And Get More In-Depth Stock Guidance and Research
By Chris Neiger – May 13, 2016 at 6:17PM

NVIDIA's GPUs are already powering some of the most advanced machine learning systems for technology companies -- and there's no sign of it slowing down. 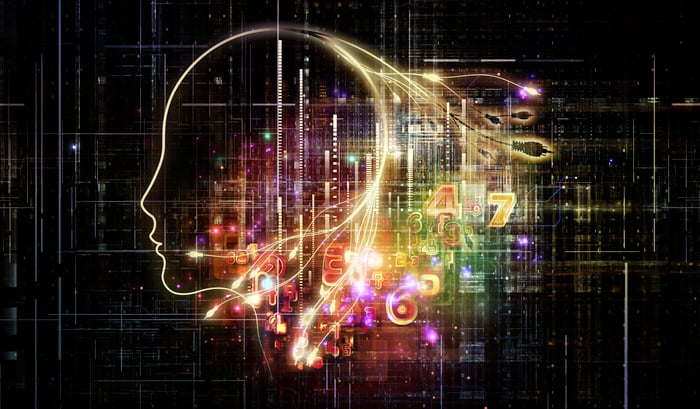 Most major technology companies are knee-deep in machine learning these days. Alphabet's (GOOG -1.98%) (GOOGL -1.82%) Google, Amazon, and Facebook (META -0.54%) are just a few. Machine learning allows the tech companies' computers to learn information on their own that they weren't programmed to know.

And as these companies dive further into machine learning, they're building their own complex computers using graphics processing units (GPUs) to power them -- and that could be particularly beneficial for NVIDIA (NVDA -0.66%).

The company makes some of the most popular GPUs for gaming, but the hardware is increasingly finding its way into supercomputers.

OK, so many of the world's best technology companies are already using NVIDIA's GPU-powered machine learning systems, but how much could NVIDIA make from this?

According to MarketsandMarkets, the cognitive computing market (which includes natural language learning, machine learning, and automated reasoning) is expected to be worth $12 billion by 2019.

And NVIDIA's already positioned itself to benefit from the enterprise machine learning market. Back in April, the company released its new Tesla P100 GPU for corporate data centers.

The company said these chips pack 15 billion transistors on them, which is about twice as many as Intel's recently debuted server processors.

That's important because technology companies are increasingly looking to advanced cloud computing systems. The global cloud computing market is worth $204 billion right now, and NVIDIA is already tapping into this market by supplying cloud computing GPUs to Microsoft, Google, and Amazon.

NVIDIA's bread and butter is still its gaming revenue, which comprised $687 million of the company's $1.3 billion total revenue in fiscal Q1 2017. Meanwhile, its data center revenue, which includes its GPU sales for cloud-based and machine learning services brought in just $143 million in the quarter.

But it's worth remembering that the company has recently started focusing on segments outside of gaming, and its making huge moves in a short amount of time. For example, the company's data center revenue increased by 63% year over year in the last quarter.

Investors looking for NVIDIA machine learning growth should keep a close watch on the company's datacenter revenue, particularly next year when the Tesla P100 starts finding its way into more servers.

I don't expect NVIDIA's revenue to spike from GPU sales for cloud-based machine learning, but rather steadily increase as the company builds out its data center segment. With the company's growing list of machine learning GPU customers, NVIDIA is poised to benefit from machine learning's growth (and its thirst for more complex data processing). But investors are going to have to wait at least a few quarters to find out how well these machine learning investments have paid off.

Suzanne Frey, an executive at Alphabet, is a member of The Motley Fool's board of directors. Chris Neiger has no position in any stocks mentioned. The Motley Fool owns shares of and recommends Alphabet (A shares), Alphabet (C shares), Amazon.com, Facebook, and Nvidia. The Motley Fool recommends Intel. Try any of our Foolish newsletter services free for 30 days. We Fools may not all hold the same opinions, but we all believe that considering a diverse range of insights makes us better investors. The Motley Fool has a disclosure policy.