The Atlanta Braves are officially trading on the public equities market.

What sports fan hasn't dreamt of striking it rich and using all those billions to buy his or her very own pro sports team? Mark Cuban, current owner of the NBA's Dallas Mavericks, did exactly that after selling his company for over a $1 billion in 1999.

It's finally time for sports fans everywhere to stop dreaming. Now, virtually anyone can buy an equity stake in Major League Baseball's Atlanta Braves, no billion-dollar checks required. Read on to learn how to buy your shares, what your shares actually represent, and if there's an actual investment opportunity in this novelty. 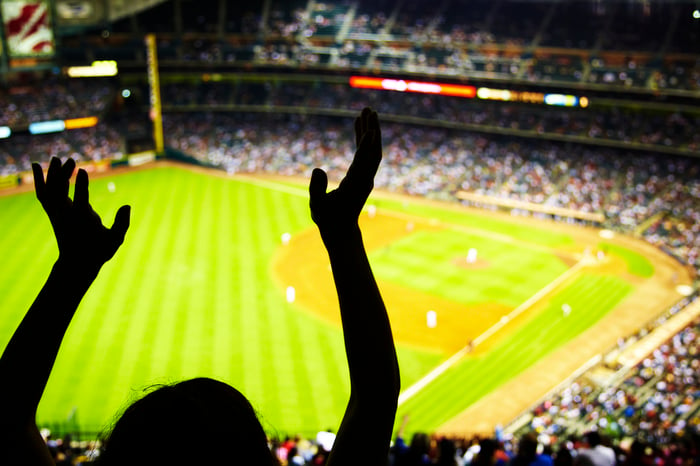 Seriously. You can own a share of the Atlanta Braves, right now.

Last November, the corporate owner of the Braves, Liberty Media, announced that it would be restructuring its existing class A, B, and C common shares into the three separate tracking stocks representing the company's three divisions. One of those divisions is, you guessed it, the Atlanta Braves baseball organization and its related assets.

Then in April, just a few short months after the announcement, shares of the Atlanta Braves began trading on the public markets, available to anyone with a brokerage account and around $20 in available cash (based on the current stock price and assuming a low cost brokerage fee). It's just that easy to be a pro sports team owner. What a time to be alive, right?

Wait a second. What does a share of Braves "tracking stock" really buy you?

First, let's define what a tracking stock actually is. The SEC says it's "a type of common stock that 'tracks' or depends on the financial performance of a specific business unit or operating division of a company -- rather than the operations of the company as a whole." So if you invest in this Atlanta Braves tracking stock, you are not technically buying the Atlanta Braves. But you kind of are. Sort of.

Liberty Media CEO Greg Maffei told investors when the plan was first announced last year that the change was to give investors a better understanding of each underlying asset group, as well as to "enable targeted capital raising" in the future. In other words, he doesn't want one underperforming division to ruin the company's chances of raising capital for other divisions. Some analysts also predicted that this change could unlock some hidden shareholder value in the full enterprise by highlighting quality assets that the market may have been overlooking in the company's consolidated financial statements.

It's a complex corporate structure, and it deserves a closer look. The Liberty Braves Group (BATRA) (BATRK) is the division tracking the Atlanta Braves and the organization's related assets.

Since the restructuring, the Braves tracking stock has tanked, while the Liberty Media Group and Liberty SiriusXM Group tracking stocks have been stable.

You can buy Braves stock -- but should you?

The Braves tracking stock is down about 40% since its first day on the Nasdaq. It's difficult to tell if that decline is driven by a fundamental problem with the franchise, an overly ambitious opening-day valuation, or perhaps even an investor revolt in response to the team's 7-23 start to the season. That's currently the worst record in all of Major League Baseball.

From a business perspective, the club's first quarter was uneventful. Revenue declined by $1 million, driven by a one-time payment from Major League Baseball last year. Operating income declined by about $15 million after the team released first baseman Nick Swisher in March. That move accelerated the recognition of his entire 2016 salary into the first quarter. Q1 is generally the worst financial quarter for baseball teams as expenses ramp up preparing for the season but ticket, stadium, and product revenues have yet to start rolling in.

Thinking even longer term, the Braves are preparing to move to a new stadium complete with the full run of corporate boxes, sponsorship opportunities, and a mixed used commercial property surrounding the stadium. That upgrade has the potential to drive significant new revenue in years to come.

On the valuation side, Liberty CEO Maffei pointed out to investors that the Seattle Mariners were just purchased for $1.4 billion earlier this year. That sale is not an unreasonable comparable for valuing the Braves, which at today's $16 tracking price has a market capitalization of only $700 million.

Of course, no one would blame any Braves fans out there for buying a few shares at this price or any other, if only to add an exclamation point to their complaints about the team's horrible start so far this season.