Please ensure Javascript is enabled for purposes of website accessibility
Log In Help Join The Motley Fool
Free Article Join Over 1 Million Premium Members And Get More In-Depth Stock Guidance and Research
By Nicholas Rossolillo - May 14, 2016 at 7:18PM

After dropping 50% in February, this social-media staple for business people is surely a bargain. Right?

After getting obliterated early in the year, shares of LinkedIn (LNKD.DL) have only begun to recover from where they were at the end of 2015. Despite strong year-over-year revenue growth in the fourth quarter, investors were disappointed in the outlook company management gave for the coming year. 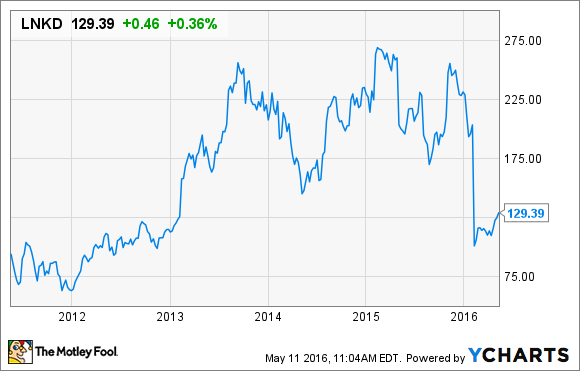 Shares have begun to rebound after upbeat first quarter results were reported on April 28. While LinkedIn still has a long way to go to get back to end of 2015 valuations, I believe there are fundamental financial problems with the company investors should be aware of.

Where is all the money going?
The first concern I have is the relationship between revenue and earnings. Revenue has been growing at an astounding pace. Five years ago, total annual revenue was about $500 million. For the 2015 fiscal year, that had ballooned to nearly $3 billion. Over the same time period, bottom-line earnings have gotten worse. 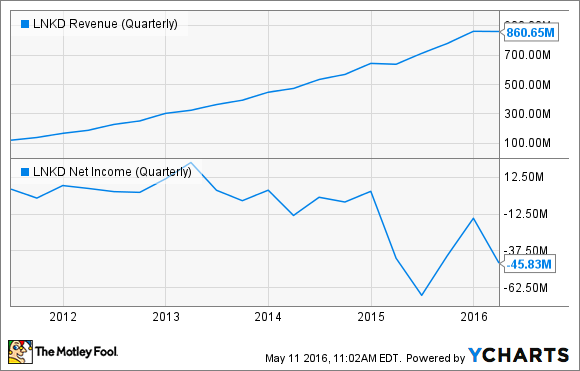 I understand that the company is investing to drive further growth. For example, last April LinkedIn announced it would be purchasing online learning business Lynda.com for $1.5 billion, which contributed over $100 million in new revenue during the year. My concern, however, is how these ongoing expenses are affecting the value of the business. Over the past five years, total assets of the company have grown by 725%, but liabilities have grown by 925%.  If company management were investing wisely, we should be seeing assets grow at a faster pace than liabilities in the long-term, not the other way around. While investing for future growth is great, the way LinkedIn has been doing it just isn't sustainable.

LinkedIn has been experiencing problems with operating income as well. Operating income is the profit after basic business expenses but before interest and tax expense. Basic operations of the business are barely profitable at best and have solidly dipped into negative territory in the past year. Taking a look at the statement of operations and income from the last quarter, the company has been spending about 35% of revenue on sales and marketing. The next biggest expense, coming in at over a quarter of all revenue, is product development. The remaining cash flow is getting eaten up by general admin and operational expenses. 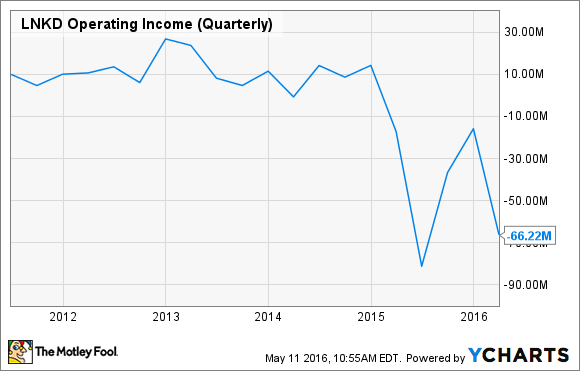 As investors mull over the implications of slowing revenue generation but no sign of expenses falling from the professional networking site, seeing basic operations in the red is worrisome. I think it's time for LinkedIn to start looking for ways to turn an actual profit and start returning value to shareholders.

What is dragging on profitability?

LinkedIn's business is driven primarily by its hiring products within the "talent solutions" division. Making up nearly 60% of revenue, these solutions cater to recruiters and other businesses looking to attract talent to their organization. Year-over-year, the company saw hiring product income increase by 23%. Realizing this is the leader in growth, LinkedIn launched its new recruiter tool late in 2015 and has already seen increased use of the new product.

The company has seen robust growth in its other segments as well, including the new learning and development segment that came with the acquisition of Lynda.com mentioned earlier. Despite the rise in business activity, though, expenses keep mounting and dragging down margins.

A solution to the problem may be in sight. Noted in last month's earnings report was the nearing end of what management has called a period of increased spending and investment to support long-term growth. This spending includes global data center infrastructure construction, which has helped with site speed and reliability. Spending cutbacks are supposed to begin later this year with the completion of most of the data center infrastructure, and continue into 2017.

LinkedIn expects to see 40% savings in the "cost of revenue" line item on the statement of operations as these reductions start to kick in. However, that particular expense only represents just over 10% of total operational cost. And even before this current period of elevated spending that began in 2014, the professional social media site has a history of very thin or non-existent profit margins, as noted in the charts above. The company will need to find more ways to cut costs and drive earnings higher as revenue growth starts to slow down.

Is it possible for the business to turn around? Yes, but a long and difficult road lies ahead for shareholders fraught with great risk. LinkedIn's financial picture worries me and keeps me from adding the stock to my holdings.