Please ensure Javascript is enabled for purposes of website accessibility
Log In Help Join The Motley Fool
Free Article Join Over 1 Million Premium Members And Get More In-Depth Stock Guidance and Research
By Demitri Kalogeropoulos - May 15, 2016 at 9:47AM

Investors can look forward to an important announcement from the Federal Reserve, along with key earnings reports from Cisco, Wal-Mart, and Campbell Soup over the next few trading days. 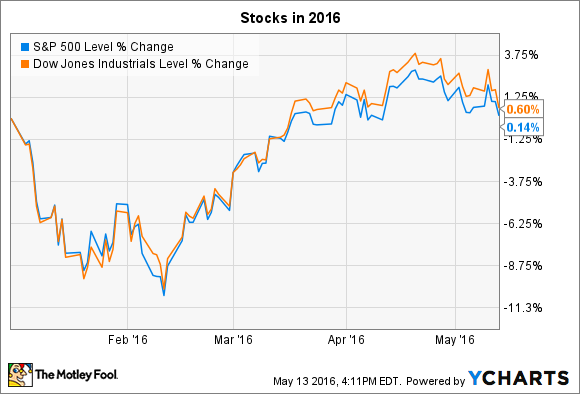 The highlight of this week's economic calendar will likely be the release of minutes from the Federal Reserve's latest monetary policy meeting. That announcement happens on Wednesday at 2:00 p.m. ET, and could produce volatility as Wall Street scours the report for clues as to the timing of the Fed's next interest rate hike.

Cisco is expected to announce mixed fiscal third-quarter results on Wednesday afternoon. On one hand, the networking giant's sales growth should be sluggish: Management forecast gains that are just on par with the prior quarter's lackluster 2% uptick. However, profitability is likely to improve thanks to cost cuts and the company's push into more software and subscription-based products.

Investors will also be keeping a close eye on cash flow. Operating cash is up 24% over the last six months, and because Cisco has targeted returning half of all free cash to shareholders as dividends, its performance on that metric translates directly into higher payouts (like the 24% hike it announced in February). CEO Chuck Robbins isn't likely to change his tune about the overall selling environment being "challenging," but shareholders are hoping the tech giant will still announce progress on both the operating and financial fronts this week.

Consensus estimates call for Wal-Mart's profits to sink by 14% when it posts earnings results on Thursday as the mega retailer pours cash into higher wages and increased training for its associates. The overall sales picture isn't pretty, with management projecting flat revenue this year. Strip out the effect of a few big store closures, though, and sales at existing locations should look a bit better -- up around 3%.

The key number to watch will be customer traffic. Wal-Mart is hoping to post its sixth straight quarter of gains by that metric, thanks in part to expensive investments in improving the customer experience. CEO Doug McMillon said in February that the retailer's satisfaction scores are rising due to changes like higher employee salaries and better store designs.

"We are pleased with fundamental trends that are allowing us to improve our stores, add critical capabilities and deepen our digital relationships with customers," he told investors. The best evidence that those initiatives are working will be increased transaction volumes.

Campbell Soup's stock is at all-time highs heading into this week's quarterly report, which might seem odd given its recent sales trends. Organic revenue hasn't improved over the past six months and management projects a flat overall result for the current fiscal year.

Still, Campbell appears to be transitioning into a fundamentally more profitable business. Gross margin jumped 4 percentage points last quarter thanks to an encouraging mix of lower costs and higher prices, especially on products like broths and condensed soups. The biscuits and snacks segment was a standout performer by generating 23% higher operating earnings on a 2% organic sales uptick.

Those wins helped power a 19% spike in net income last quarter, which puts the food giant on track to deliver a comforting double-digit bounce in EPS this year.