Please ensure Javascript is enabled for purposes of website accessibility
Log In Help Join The Motley Fool
Free Article Join Over 1 Million Premium Members And Get More In-Depth Stock Guidance and Research
By Brian Feroldi, Rich Duprey, and Daniel B. Kline - May 16, 2016 at 8:45PM

These three companies have some of the most recognizable brand names in the world. Here's why our team of contributors thinks that each is a great candidate to buy and hold for the long term.

The forces of capitalism ensure that almost every company in the world will face a healthy amount of competition. One smart way companies look to overcome the competitive pressure is to make their brand names synonymous with the products or services they offer. Any company that can do so successfully stands a much better chance of increasing its market share over time, which usually leads to higher profitability.

That's a big reason we Fools love to buy stock in companies that have created a strong brand name that resonates with its customers. With that in mind, we reached out to a team of our Foolish contributors and asked them to highlight a big-brand company that they believe is a compelling buy today. Read on to find out which companies they like and see if you agree.

Rich Duprey: With all the speculation swirling that Kraft Heinz might make a play for cereal maker General Mills, it's worth noting that Mondelez International (MDLZ -1.00%) is the perennial favorite of M&A rumor-mongers. Its combination of powerhouse brands and a global footprint makes it a tempting target, though Warren Buffett has previously said it's too richly valued for him to make a bid on it.

Yet it could make a buyout candidate for someone, particularly a company that wanted to fend off an unwanted acquisition attempt. It's why General Mills has often been thought of as a possible buyer, because it, too, keeps cropping up in takeover talks.

But beyond the potential catalyst of a merger, investors should think about adding Mondelez International to their portfolios anyway. It holds the preeminent position in three important categories, including candy, chocolate, and biscuits, while generating 85% of its revenues from the snacks market. It was that growing segment that was the inspiration for Nelson Peltz to advocate that PepsiCo buy Mondelez, split off its drinks business into a separate unit, and focus on the public's snacking habits.

Of course, Pepsi rejected his overtures and he ended his campaign, accepting instead a seat on Mondelez's board of directors. At less than 10 times earnings and only 21 times estimates -- which, considering analyst growth forecasts, gives it an enticing PEG ratio of less than 1 -- the global snack company should make a tasty morsel for investors.

Brian Feroldi: You'd be hard pressed to find a company that's done a better job of making its brand name synonymous with beer than Anheuser-Busch InBev (BUD 1.56%). The company spends billions of dollars each year to promote its huge stable of brands, which I think has been money well spent. The company now counts 19 brands in its lineup that each pulls in more than $1 billion in worldwide revenue, which creates a moat that competitors have found unable to breach. 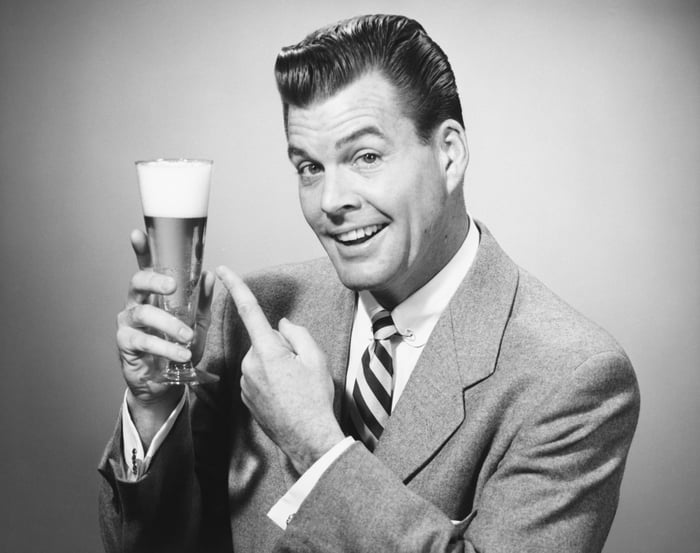 That moat should help the company continue to churn out profits for decades, but the reason I think Anheuser-Busch InBev is an exciting investing idea today is that it's in the process of buying SABMiller, the No. 2 beer maker in the world. Regulators are still working out the details, but the company believes it's on schedule to close in the second half of the year. Once that happens, this company will control more than 30% of the worldwide beer market, making its already huge moat that much stronger.

Anheuser-Busch InBev's rationale for the deal is that buying SABMiller will immediately give it a foothold in the emerging markets where it doesn't already have a big presence. Africa looks to be an area of particular interest, as consumer purchasing power in the region is growing quickly and SABMiller holds a strong position in the area. That will position the company for decades of above-average growth as those markets mature.

With shares trading for about 24 times next year's earnings and offering up a dividend yield of 3.1%, this is a fairly priced company that's poised to dominate for decades to come.

Daniel B. Kline: Declining soft-drink sales have been ongoing bad news for Coca-Cola (KO 0.08%), but the company's stock has mostly recovered. The beverage brand has been trading in the $45 range -- close to its $47.13 52-week high. That's good news when you consider that the company is in the midst of a transformation and net revenue dropped by 4% in Q1 2016, where the company reported earnings per share of $0.36, down from $0.45 in the same quarter a year ago.

Those numbers weren't awful, and the company's April 20 earnings report showed that the company's long-term transformation has started to work. Overall global volume was up 2%. The company has also stopped the bleeding in sparkling beverages (anything carbonated, including soda), posting zero growth, but also zero decline. In addition, still-beverage sales grew by 7% -- a very encouraging sign that Coke has been able to move away from its reliance on soda.

The market has been wary of Coca-Cola because the company still has exposure in soda, a product line that suffers from negative press because of the health problems excessive consumption can lead to. But much of the suffering may be over in that market, and the bottom appears to have been found. Now, 18 months into CEO Muhtar Kent's transformation efforts, the needle is moving in the right direction.

Investors are overlooking Coca-Cola because of the soda stigma. But this isn't a cigarette company that had no other products to sell once its market became poisoned. Coke has the product lines and the distribution channels to sell consumers whatever they want to drink in the moment. That ultimately should lead to growth, even if soda sales remain stuck in neutral or go back into decline.