Please ensure Javascript is enabled for purposes of website accessibility
Log In Help Join The Motley Fool
Free Article Join Over 1 Million Premium Members And Get More In-Depth Stock Guidance and Research
By Reuben Gregg Brewer - May 16, 2016 at 9:00AM

National Grid Transco is a U.K. utility, growing in the United States... which is an opportunity, but also something more

On the surface, National Grid Transco (NYSE: NGG) looks like a boring old utility. But once you look a little closer, you see that it's really a U.K. utility expanding across the pond into the U.S. market. This expansion is obviously an opportunity, but it's also the biggest threat National Grid faces today.

Not your grandma's utility

National Grid's roughly $50 billion market cap ranks up there with U.S. utility giants like Southern Company (SO 2.57%) and Duke Energy (DUK 2.25%), which weigh in at roughly $45 billion and $53 billion, respectively. The yields of all three are all around the same, too. But National Grid's 4.5% or so is at the top-end of the list, which might draw some attention from a few income investors.

The problem with this is that Duke and Southern are a little different because they are focused on the U.S. market; National Grid's big business is in the United Kingdom. In fact, the company's U.K. electric and gas operations make up roughly two thirds of its operating profits. That's a vastly different picture, and you need to be well aware of this fact if you're going to invest in National Grid.

Here's how the company is thinking about its businesses going forward: 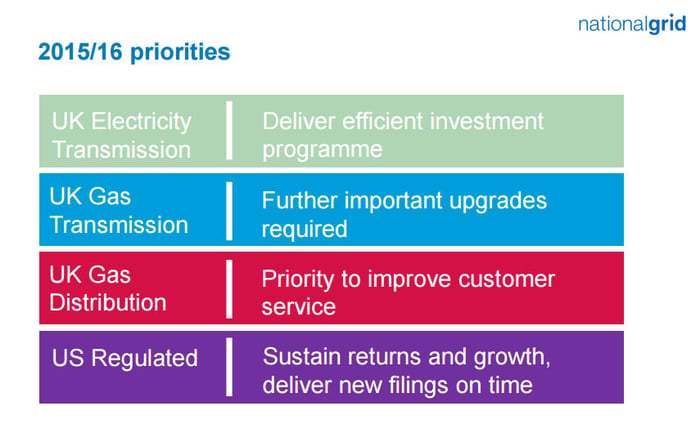 Which brings us to the biggest risk facing National Grid today: growth. The U.K. market is mature and pretty small, relatively speaking, when you compare it to the United States (it's about the size of Texas). So National Grid has been investing in its U.S. business, focused around transmission assets, to push growth. The U.S. accounts for about 20% of the utility's operating profits, but in the first half of fiscal 2015/2016, roughly half of its capital spending went into its U.S. business.

In fact, when National Grid discusses its priorities across its various business segments, only the goals for the U.S. business include the word growth. And based on the outsized commitment being made to the U.S. market, this U.K. utility is serious about growing in the United States even though it already has a sizable business in the northeast.

But if you buy National Grid, you'll need to pay close attention to where the company is putting its money. If it falters in its U.S. push, it could mean that growth doesn't live up to expectations. Investors would likely take a dim view of that. 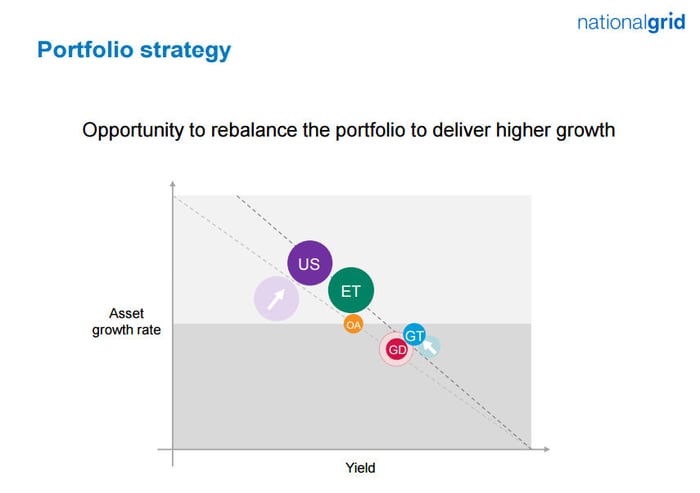 So it makes sense to ask what could go wrong. First and foremost, National Grid is in the process of asking regulators to allow it to increase what it charges customers. That's a delicate dance, which includes spending money on infrastructure. If spending plans don't work out as hoped, there's no guarantee that regulators will let National Grid recoup all of what it spent. And even if National Grid executes well, there's still no way to ensure that it will get the rate hikes it's hoping for.

Than there's expansion via acquisition. There have been a number of big mergers in the utility space, including gas utility purchases by both Southern and Duke. If National Grid really wants to kick up its long-term growth, investing in its existing businesses will only get it just so far. So more U.S. acquisitions could easily play an important role in National Grid's future. Since it's focused on transmission, and not power generation, however, it could be hard to find purchase opportunities.

Utility mergers can also be complicated and expensive. Regulators in every area in which a utility operates have to approve a deal. It's not unusual for concessions to be made, which usually jacks up the cost for the acquirer in some way.

In the end, there are two big issues to think about with National Grid. First, it's really a U.K. utility expanding in the U.S. market. This leads to the second issue, and the really big risk: The company is pretty much pinning its growth on the United States.

Should anything go wrong, National Grid's results probably won't live up to expectations. Don't forget about the company's large U.K. exposure, but the real risks reside in the U.S. business.