The Latin America-based McDonald's franchisee maintained a strong uptrend that began in February of this year.

What: Shares of Arcos Dorados Holdings (ARCO 1.43%) rose 10.7% during April, according to data provided by S&P Global Market Intelligence. The appreciation reflected continued investor confidence that a three-year strategic plan initiated by management has the potential to turn the company's fortunes around. For now, the world's largest McDonald's franchisee is enjoying a rare uptrend: 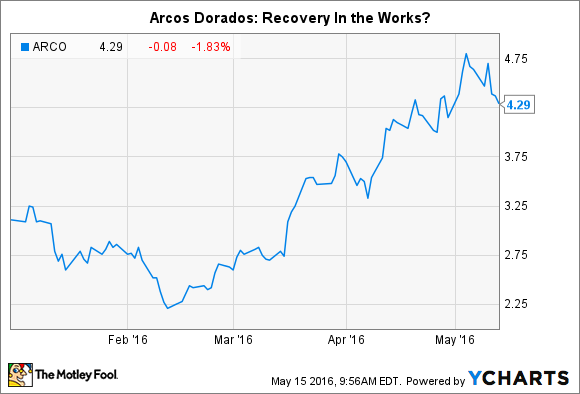 Of course, this performance is relative; over the last five years, Arcos has declined from its peak above $28 per share to its current levels. And during the last trailing 12 months, the stock slumped from over $6 per share to the the trough shown above in late February 2016.

So what: Arcos has weathered long-term pressure from a gradual slow down in the emerging economies of Latin America in which it operates. In the last two years, the U.S. dollar's strength against South American currencies has crimped Arcos' profits, which are dollar-denominated. These effects have been exacerbated by inflationary pressures in countries such as Brazil, Venezuela, and Argentina.

Compounding investor worries, Arcos has operated until recently with extremely high debt levels relative to earnings. A substantial portion of this debt previously existed in Brazilian bonds denominated in the country's currency, the real. After Standard & Poor's rating agency downgraded Brazilian debt to "junk" status in September of 2015, shareholders fretted that Arcos' already high financing costs would begin to soar.

Late last year, management announced its intention to restructure company debt as one of the first steps in its new strategic plan. In late March of 2016, Arcos' Brazilian subsidiary signed a secured loan agreement of $167.3 million with a consortium of five lenders, enabling the organization to repay the real denominated notes of roughly the same amount, which are due in 2016. As of this month, the company has retired 67% of the notes through a cash tender offer.

Now what: Arcos may be on the verge of regaining its footing. During the company's Q1 2016 earnings conference call this month on May 4, management confirmed that it's making progress on its plan to refranchise certain properties, as well as sell a portion of its valuable real estate portfolio in Mexico. According to CEO Sergio Alonso, the company now has in place agreements that represent about half of its total goal. This would equate to about $50 million of a previously announced $100 million monetization target, which will further reduce balance sheet leverage.

The company also reported improved operating margin of 3.3% for the first quarter of 2016, versus a margin of less than 1% for the comparable prior-year quarter. That's a small but concrete step forward. While challenges abound, in particular a stagnant economy in its biggest market of Brazil, Arcos has at least proven through its debt reduction that it can be viable going forward.

Asit Sharma has no position in any stocks mentioned. The Motley Fool owns shares of Arcos Dorados. We Fools may not all hold the same opinions, but we all believe that considering a diverse range of insights makes us better investors. The Motley Fool has a disclosure policy.