Please ensure Javascript is enabled for purposes of website accessibility
Log In Help Join The Motley Fool
Free Article Join Over 1 Million Premium Members And Get More In-Depth Stock Guidance and Research
By Brian Feroldi, Jason Hall, and Matthew Frankel, CFP® - May 17, 2016 at 9:03AM

Here's a list of three stocks that our contributors love for retirees.

Studies show that Americans are living longer than ever. That's great news, but it also means that investors in their golden years will need to rely on their nest eggs to sustain them financially for a longer time period. For that reason, we Fools believe that these investors should keep at least a portion of their net worth in the stock market. Doing so will give them a better chance at producing higher returns, and is more likely to help them keep ahead of inflation.

Of course, that doesn't mean that these investors should go crazy and invest in high-risk growth stocks. Instead, their best bet is to invest in companies with strong competitive advantages that operate in markets with good growth prospects.

To help investors find appropriate stocks, we asked a team of Motley Fool contributors to share a stock that they think is a good fit for any retiree. Read below to see which companies they selected.

Brian Feroldi: One of my favorite companies for retirees to consider owning is MasterCard (MA -2.79%). The company is the second-largest electronic-payment processor in the world, and its operations span the globe. MasterCard's enormous network and global reach give it a wide and enduring moat that help to protect it from competitive threats.

Since electronic-payment options have been around for decades, you may assume that the company's best days are behind it. I thought so, too, until I learned that Americans still use cash or checks for about half of their purchases, which is both slow and inefficient. The numbers are even more skewed when you zoom out to include the rest of the world, as an estimated 85% of global transactions still occur using cash or check. That represents a massive opportunity for payment processors like MasterCard to continue winning share, which is why I think the company is poised for decades of strong growth ahead.

The company's recent results confirm that the shift away from cash is still underway. MasterCard's revenue grew 10% last quarter, to $2.45 billion, and its growth would have been even faster if currency movements had been removed from the picture. The company processed more than 12.6 billions transactions during the quarter, and it now has 2.3 billion cards in circulation.

What's really great about MasterCard's business model is that it costs the company next to nothing to process additional volume. That's a big reason why its profits have been growing at a faster pace than revenue for years. When adding in the company's generous share repurchase program to the mix -- it bought back $1.4 billion worth of stock in the last quarter alone -- it's no wonder that the company's stock has been smashing the returns of the S&P 500 for years. 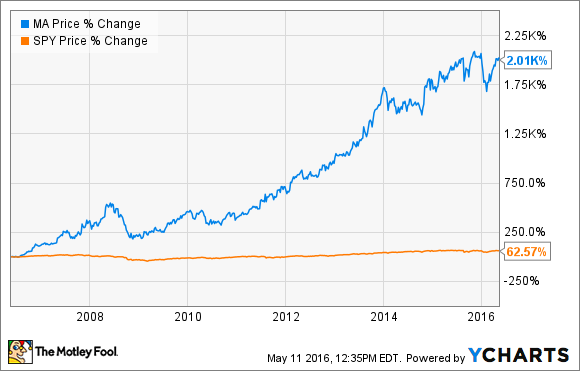 MasterCard's stock offers investors reliable growth, a terrific business model, and a history of market-thumping returns. That's a powerful combination that I think is too good to pass up, which is why this company is one of my largest personal holdings, and such a a great choice for any retiree.

Matt Frankel: One of my favorite retirement stocks is Berkshire Hathaway (BRK.A -0.49%) (BRK.B -0.46%), which just wrapped up its annual meeting. Now, I've written several times before about the reasons for investing in Berkshire -- specifically, its rock-solid portfolio of subsidiary companies and stocks, and its excellent financial condition.

One of the recurring themes of this year's Q&A session was the future of Berkshire. Warren Buffett did a great job of addressing investors' concerns about several issues.

For starters, the most obvious area of concern is "what happens when Buffett is gone?" While Buffett has said before that there is a succession plan in place, he emphasized that Berkshire's culture is deeper than who's at the helm of the company, and that steps have been taken to ensure that Berkshire is still Berkshire decades into the future.

Another area of concern is the upcoming presidential election -- specifically what a Trump presidency would mean to Berkshire. Buffett clarified that it doesn't matter who's in charge -- America is in excellent shape, and Berkshire's businesses will continue to thrive no matter who gets elected.

In short, when investing for retirement, it's important to look for businesses that work in good times and bad. It doesn't get much better than Berkshire.

Jason Hall: Whether you're saving for a future retirement, or already retired and looking for a good stock to invest in, Nucor Corporation (NUE -2.26%) is worth a close look. Why is now a good time? Two reasons: attractive valuation, and strong macroeconomic factors.

Let's take a look at the macro part first. You wouldn't know it by looking at steelmaker prices during the past year: 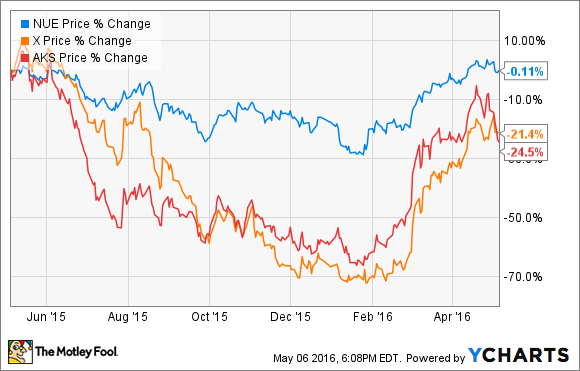 But steel demand in North America is actually very high. Even with weakness in demand from the energy and industrial machinery sector, strong demand from the automotive industry and steadily growing demand from nonresidential construction and other key industries, has demand and consumption levels quite high. The recent struggles in the industry have been largely a product of illegal dumping from foreign state-owned steel companies.

There's been good news on this front, as tariffs and other actions have forced the bad actors to stop propping up their domestic industries. Last quarter, import volumes declined for the first time in several years, and this is likely to continue, with even more pressure on steel-producing countries like China to cut excess production, because foreign markets are clamping down on illegal trade.

Second, while the macro picture continues to improve, Nucor -- easily the best, most-profitable steelmaker -- is also trading at a pretty reasonable value. It may look pricey at a trailing price-to-earnings multiple above 40, but its forward P/E ratio is in the mid-teens, below the S&P 500 average.

Add in a dividend yielding 3%, and you've got an excellent company at a reasonable price, and on the right side of the demand cycle for its industry. Put Nucor on your list.