Please ensure Javascript is enabled for purposes of website accessibility
Log In Help Join The Motley Fool
Free Article Join Over 1 Million Premium Members And Get More In-Depth Stock Guidance and Research
By Nicholas Rossolillo - May 17, 2016 at 3:38PM

American fast food is in decline, and fast-casual is the buzz. Is fast-casual doing drive-through junk food in, or is there a larger trend investors should be paying attention to?

Americans have an affinity for fast food. From frozen TV dinners to the drive-through, hamburgers and hot dogs to pizza, American cuisine is often associated with convenience and quickness above all else. The latest trend in American food, fast-casual dining, seeks to offer the same speed and convenience as fast food without sacrificing overall quality. Many assume that fast-casual is supplanting full-service and fast-food restaurants in popularity. But do the numbers back this thinking up?

Changes in eating-out habits
While a rising tide may lift all boats, some boats prove to be a little more buoyant than others. Quick-service food, which includes fast-food and fast-casual, is growing at a slower pace than the overall restaurant industry, while growth in full-service establishments is slightly exceeding that of the overall industry. America's collective eating-out budget swelled from $467 billion in 2010 to $622 billion in 2015, a 33% increase. Over that same period of time, full-service restaurant spending increased 38% and displaced almost 5% of spending at quick-service restaurants as an overall percentage of the eating-out budget.

What's causing this change in the trend? The answer lies in generational differences. A snapshot survey taken in 2014 showed that the U.S. population overall was replacing fast-food pit stops with visits to fast-casual diners and full-service restaurants. People under age 30 -- who make up over a third of the entire U.S. population -- increasingly favored fast-casual options over fast food, and they were also eating out in general much more often. Those meals away from home were being purchased at places that touted higher-quality or fresher ingredients, with a more formal or themed dining atmosphere and more customer service than the typical fast-food option can offer.

As younger generations age and assert more command of the economy, America's dependence on quick food is changing. While fast-casual diners have been all the buzz lately, many investors have been ignoring the resurgence of full-service restaurants. An increasing number of consumers are willing to pay up or even wait a little bit longer for a higher-quality meal and better service. Traditional fast food now has a two-front war on its hands and is under attack not only by newer and fresher fast-casual brands, but also by full-service options.

Cases in point
To illustrate these changes, let's look at one restaurant chain from each of the fast-food, fast-casual, and full-service sectors.

While it continues expansion and growth overseas, McDonald's (MCD 1.52%) has not been able to offset declines in U.S. business. Beset by growing awareness of health and fitness, fierce competition within the fast-food industry over the shrinking number of overall sales, and a general stigma among younger consumers that has been difficult to shake, McDonald's has struggled to lure in hungry constituents. 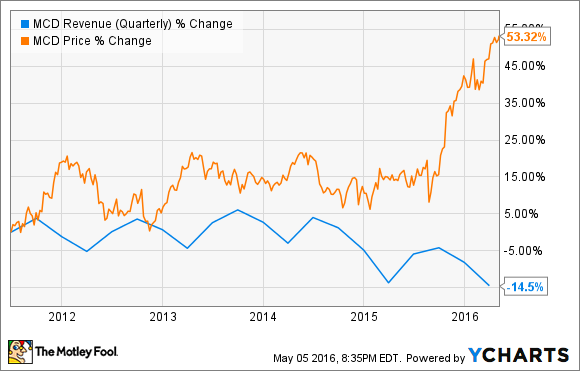 In recent years the company has fought back against the trend by introducing new menu items such as fruit and salads, "premium" burgers, store remodels, and the recent launch of all-day breakfast. To date, none of these initiatives has gotten the company back to peak revenue levels, although cost-cutting and profit-margin increasing initiatives have driven stock prices higher in the past year. Longer-term, though, management will ultimately need to find ways to reconnect with changes in dining trends to increase sales. 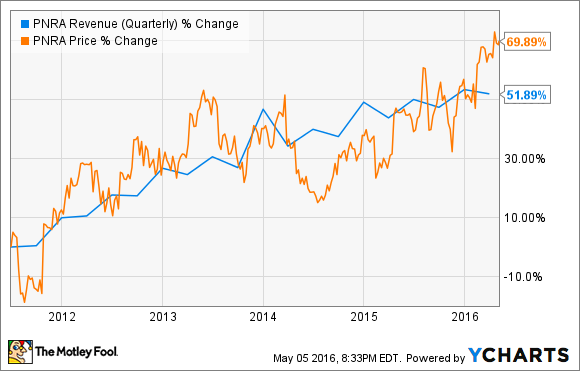 The company had just over 1,450 locations back in 2010 and has grown over 30%, with nearly 2,000 locations in the United States. Revenue and share prices have followed on the same trajectory as the new location growth. The large bakery/cafe is testament to the fact that consumers aren't eliminating their fast-food budgets, but replacing them with an alternative.

Following a similar trajectory to Panera Bread is full-service restaurant chain Texas Roadhouse (TXRH 1.43%). The company has been on a growth tear in the past five years, growing locations, revenue, and share prices with seeming ease. 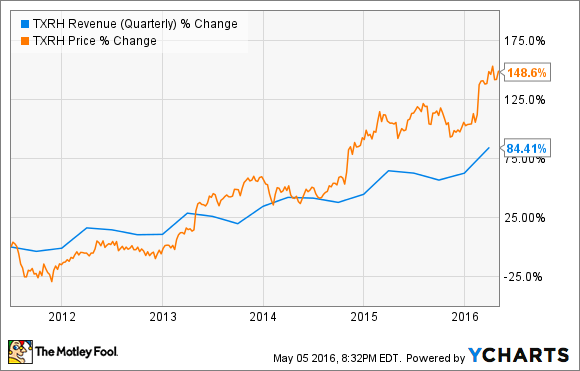 What has been the secret to success? The company likes to tote its large portions for a good value, and its lively, loud, "themed" Texas atmosphere. Whatever it is exactly, it has been working.

Action steps for investors
Though "fast-casual" has become a buzzword, investors should consider that the restaurant industry in general is changing. Though fast food may be under siege, strong trends have started to develop that support fast-casual and full-service chains with a strong "themed" menu and atmosphere. The consumer taste shift may be wreaking havoc on McDonald's and other similar businesses, but it presents exciting new opportunities for investors.