Please ensure Javascript is enabled for purposes of website accessibility
Log In Help Join The Motley Fool
Free Article Join Over 1 Million Premium Members And Get More In-Depth Stock Guidance and Research
By Adam Levine-Weinberg - May 17, 2016 at 9:55AM

Nordstrom's Q1 earnings report was ugly on the surface, but the company's woes are probably temporary.

Investors have dumped the stock, sending it down more than 20% in the past week. Nordstrom shares have now lost about half of their value since last summer. 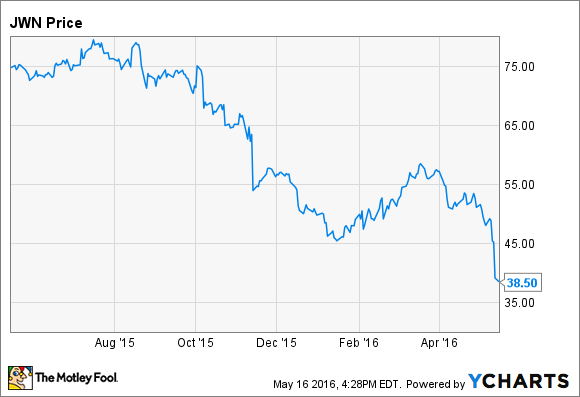 However, Nordstrom's underlying business is a lot healthier than it appears. As a result, I expect sales growth to accelerate again and earnings to rebound in dramatic fashion during the next few years. Here are three reasons why I remain confident in Nordstrom's future.

The first and most important reason for confidence is that full-price sales in Nordstrom stores remained quite strong last quarter. Much of the broader concern about department stores is that the rise of Amazon.com (AMZN 3.15%) -- and e-commerce as a whole -- is driving a vicious cycle of discounting.

"There is now going to be no end to discounting because all the players must dance as long as the music is playing. And it will ultimately drag everything down with it, including brand image, potentially quality and essentially the value of all things," wrote retail consultant Robin Lewis last year.

This may be true for certain brands with broad distribution that have become commoditized over time. Promotions have become rampant for some big brands that Nordstrom sells, putting pressure on both revenue and profitability.

By de-emphasizing these commoditized brands and doubling down on exclusive and limited-distribution brands, Nordstrom should be able to reinvigorate its core business. That's exactly what it plans to do.

While Nordstrom's full-price business was undermined by this intense discounting for certain brands, the Nordstrom Rack off-price business performed well in Q1. Comp sales increased 4.6% year over year in the off-price market, up from 3.6% in Q4 2015 and 2.4% in Q3 2015.

It's true that this comp sales growth came from the e-commerce channel, which is significantly less profitable. In-store comp sales declined 0.8% year over year for Nordstrom Rack. But this is a very respectable result given that Nordstrom has also been expanding the Rack store base at a double-digit rate in recent years. These new Nordstrom Rack stores are still producing strong sales volumes. As a result, total off-price sales rose 11.8% year over year in Q1.

As the Rack expansion cools off over the next few years, in-store comp sales should turn positive again. Meanwhile, as the off-price e-commerce business matures, its profitability will continue to improve. Both trends point toward an earnings rebound for Nordstrom's off-price segment.

Focusing on e-commerce profitability over sales

However, this isn't a sign that Nordstrom is unable to compete with Amazon.com's nascent retail efforts. It just shows that Nordstrom isn't going to compete on Amazon's low-margin terms. Over the past few months, company executives have become increasingly candid about the need to focus more on profitability than growth in the e-commerce business.

Nordstrom invested aggressively in its e-commerce business in recent years. These efforts have made it one of the top 10 online retailers in the U.S., both by sales and by shipments. Yet some of this growth came from adding items to its e-commerce site that weren't profitable.

By 2017, Nordstrom should be lapping the impact of its strategy shift. That should drive a return to growth -- at higher margins than before.

In the past few quarters, Nordstrom's revenue and earnings have been hurt by stiff competition from online retailers like Amazon as well as traditional department stores. Many investors seem to have concluded that the company is doomed.

However, it's important to remember that Nordstrom's revenue grew more than 9% year over year in the first half of 2015. So far, the sales slowdown is a blip, not a trend. As Nordstrom reduces its exposure to underperforming brands and removes unprofitable items from its website, the company's earnings performance should improve dramatically.