Please ensure Javascript is enabled for purposes of website accessibility
Log In Help Join The Motley Fool
Free Article Join Over 1 Million Premium Members And Get More In-Depth Stock Guidance and Research
By Andrés Cardenal - Updated Jun 28, 2017 at 9:28AM

E-commerce is a promising growth industry, and companies such as Amazon, eBay, and MercadoLibre look well positioned to capitalize on growth opportunities over the years ahead.

Check out this new list of top e-commerce stocks to buy now.

E-commerce is one of the most exciting growth industries around. According to forecasts from market researcher eMarketer, global retail e-commerce sales will more than double between 2015 and 2020, increasing from $1.7 trillion to $3.6 trillion. For investors looking to capitalize on this massive opportunity, companies such as Amazon (AMZN -1.73%), eBay (EBAY -2.36%), and MercadoLibre (MELI -7.29%) are attractive candidates to consider.

Amazon is almost a synonym for online commerce nowadays. The online retail titan comes second to none in terms of competitive strength, and the business is reporting impressive growth rates considering its gargantuan size. Wall Street analysts are on average forecasting that Amazon will make over $134 billion in total revenue during this year, and scale is a crucial source of competitive advantage in the business, as it allows Amazon to offer its products for conveniently low prices.

Customers just love Amazon: According to the American Customer Satisfaction Index, the company has ranked in the first position in the e-commerce industry in each and every year from 2000 to 2015. This says a lot about Amazon's brand value and competitive differentiation.

Total revenue during the first quarter of 2016 grew 28% year over year, reaching $29.1 billion.  Excluding the unfavorable impact from changes in foreign exchange rates, sales increased by an even stronger 29%. Even in North America, the company's most mature market, Amazon registered a big increase in revenue of 27%, indicating that it still has considerable room for expansion, as the business is far from reaching any level of market saturation.

Not only is the company delivering impressive performance in e-commerce, but Amazon is also one of the leading players in cloud computing infrastructure around the world. Amazon's cloud computing business produced $2.6 billion in sales last quarter, a staggering increase of 64% versus the first quarter in 2015. The segment is also remarkably profitable: Amazon registered an operating margin of 23.5% in cloud computing during the quarter.

Amazon is clearly the market leader in e-commerce, but eBay could be a better choice for investors looking to bet on a solidly profitable business trading at conveniently low prices.

Competing against Amazon is no easy task at all, and this is putting considerable pressure on eBay. The company reported a modest increase of 6% in constant currency sales during the first quarter of 2016, and management is expecting revenue during the full year to be in the range of $8.6 billion to $8.8 billion; this would represent an annual increase of 3% to 5% in constant currency terms.

On the other hand, eBay is mostly an e-commerce platform as opposed to an online retailer, so the company doesn't need to worry about aspects such as inventory risk or logistics costs. This allows eBay to operate with impressive profitability: operating margin was in the neighborhood of 28.7% of sales last quarter.

Importantly, while most e-commerce stocks are relatively expensive, eBay is trading at remarkably attractive valuation levels. The stock carries a price-to-earnings (P/E) ratio around 14.5 times earnings over the last 12 months. According to data from Morningstar, the average company in the S&P 500 index trades at a P/E ratio near 19, while companies in the e-commerce sector trade at a much higher average P/E ratio in the neighborhood of 33.

MercadoLibre is the undisputed e-commerce leader in Latin America, so the company offers exceptional opportunities for growth over the long term, even if key markets such as Brazil, Argentina, and Venezuela are going through significant economic turmoil and this is weighing on financial performance when expressed in U.S. dollars.

Looking at the company's performance in U.S. dollars versus local currencies, it's easy to see how currency headwinds are hurting the business considerably. Revenue during the first quarter of 2016 was $157.6 million, a year-over-year increase of 6.4% in U.S. dollars, while the sales increase in local currency terms was a much bigger 75%.

High inflation in local currencies and intermittent fluctuations in exchange rates mean that MercadoLibre's performance in monetary terms is hard to predict. However, the business is clearly firing on all cylinders, according to the main operational metrics. 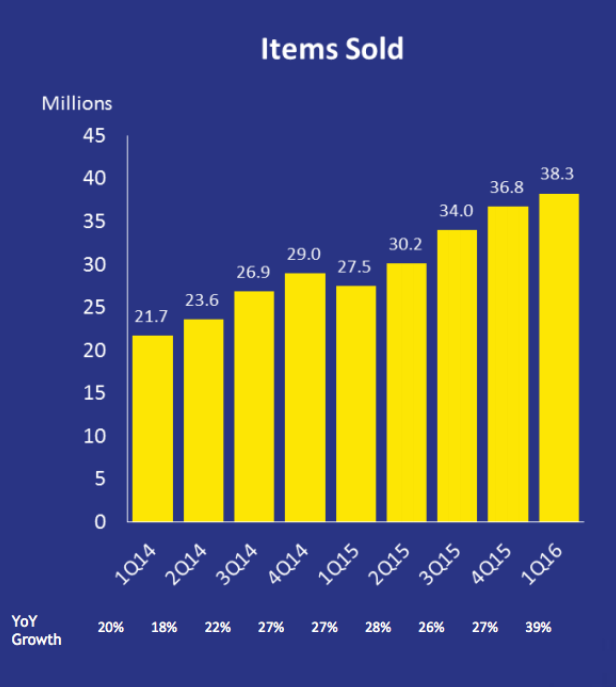 The company ended the first quarter of 2016 with 151.5 million registered users, a big increase of 19.6% versus the same quarter last year. Items sold via MercadoLibre's marketplace platform amounted to 38.3 million, growing by 39.4%. The company is also making big inroads in digital payments with MercadoPago; total payment volume grew 32.7% in U.S. dollars and 108.1% in local currencies last quarter, while processed payment transactions increased 85.5%.

Investors in MercadoLibre need to be willing to tolerate considerable uncertainty due to the volatile macroeconomic environment in Latin America. However, the company is at the same time the main driver and the biggest beneficiary from the e-commerce revolution in the region, and this could generate spectacular gains for shareholders over the years ahead.