Please ensure Javascript is enabled for purposes of website accessibility
Log In Help Join The Motley Fool
Free Article Join Over 1 Million Premium Members And Get More In-Depth Stock Guidance and Research
By Todd Campbell - May 19, 2016 at 4:41PM

Slipping sales, rising expenses, and a $800 million valuation could make GW Pharmaceuticals too risky to buy.

GW Pharmaceuticals plc (GWPH) is knee-deep in developing medicine that's derived from marijuana. It's been researching the medical benefits of marijuana cannabinoids since the 1990s, and it already has one marijuana drug on the market in Europe. However, there are some risks facing GW Pharmaceuticals that may indicate investors ought to sit on the sidelines.

Here are three charts explaining why I think this company is too risky to buy right now.

Tepid sales of its marijuana drug

GW Pharmaceuticals has been marketing Sativex as a treatment for muscle spasms in multiple sclerosis patients for years in Europe, but despite Europe being home to about half of the global population of MS patients, sales remain a trickle.

Over the past five years, trailing-12-month sales reported by the company has slipped to about $31 million from a peak of over $50 million. However, lackluster performance by Sativex is only partially to blame for the drop in revenue. The biggest reason for slumping sales is the end of collaboration revenue from Otsuka Pharmaceuticals on Sativex. 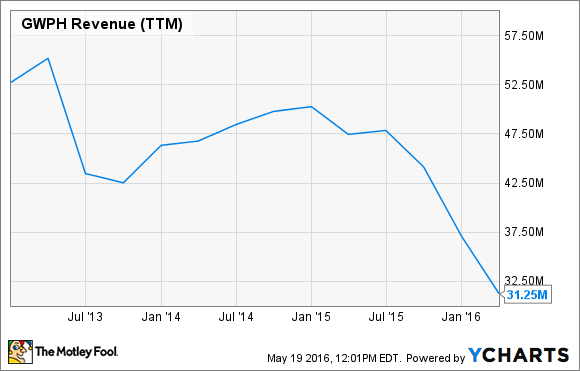 GW Pharmaceuticals' marijuana research efforts are at all-time highs, and trials spanning indications from diabetes to epilepsy are costing it millions of dollars every quarter.

Unless the company's spending on current trials starts to pay off, management's spending pace won't be able to continue indefinitely. Fortunately, the company reported earlier this year results from a phase 3 trial of its CBD drug, Epidiolex, in dravet syndrome patients that were impressive. Patients taking Epidiolex saw a 39% decrease in monthly seizures. If other ongoing trials produce similar results, a FDA approval in 2017 is a possibility, and that could take a lot of the heat off GW Pharma's income statement. 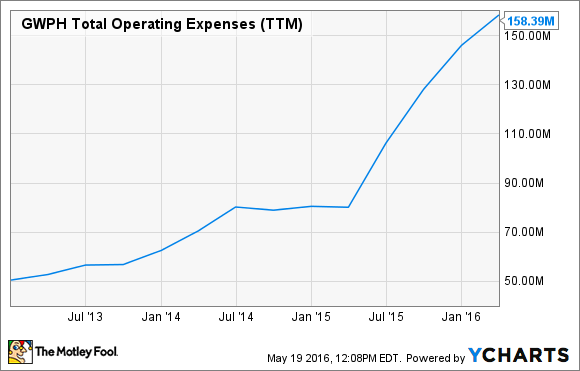 Companies researching innovative new medicine typically trade at a premium valuation, and that appears to be the case for GW Pharmaceuticals.

The company's shares tumbled after its cancer pain trials failed to pan out, but a rally following the Epidiolex trial results has pushed GW Pharma's valuation to an ear-popping $1.7 billion.

Admittedly, a victory in Epidiolex could translate into significant revenue that helps justify that valuation, but sales of Epidiolex would need to be in the hundreds of millions of dollars per year for that to be the case.

I'm not sure how much GW Pharma will eventually charge for Epidiolex if it wins FDA approval, but the patient population Epidiolex targets totals about 20,000 people in the United States. If Epidiolex is priced at $10,000 per year, and it's used by all of those patients, that works out to $200 million in annual revenue.

GW Pharma's valuation was a bigger concern when the company's market cap was flirting with $2.7 billion last year, but its current market cap may still be too high. 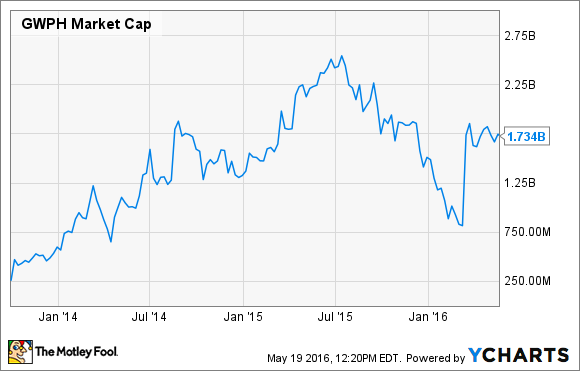 Overall, only time will tell if GW Pharmaceuticals' efforts to commercialize marijuana medicines will pan out, and if they'll be able to effectively market them at prices high enough to warrant the stock's current valuation. Regardless, the risk associated with buying shares in GW Pharma are high enough for me to think other investment options might be better.