Please ensure Javascript is enabled for purposes of website accessibility
Log In Help Join The Motley Fool
Free Article Join Over 1 Million Premium Members And Get More In-Depth Stock Guidance and Research
By Travis Hoium - May 19, 2016 at 12:07PM

The solar industry is booming, but which one of these solar manufacturers will benefit most?

If you look at the past decade for Canadian Solar (CSIQ -0.06%) and Trina Solar (NYSE: TSL), you see that there are massive swings in both companies' fortunes. But both have built the kind of manufacturing capacity and project-building prowess that makes them big players in today's industry. So, which one is a better buy for investors? 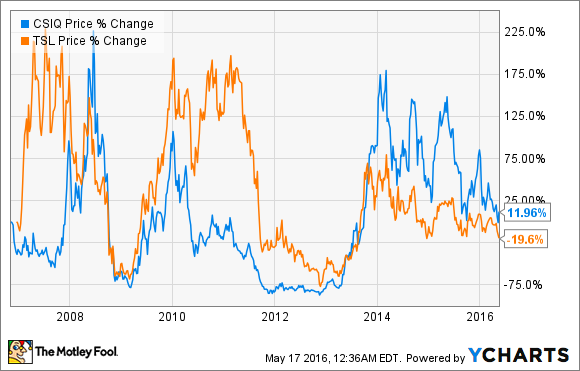 If you just look at what Trina Solar and Canadia Solar do, they are very much alike. They have comparable solar module manufacturing capacity and will develop a similar number of utility-scale systems this year.

One difference between these two businesses is that Canadian Solar is more heavily focused on systems development in North America and Japan. Trina Solar has primarily been focused in China, where margins are low and interconnection of plants is uneven.

If there's one risk that investors should put a lot of focus on its the balance sheet. Solar panel manufacturers that have gone bankrupt have usually been undone by high levels of debt, so maintaining flexibility is key.

At the end of first-quarter 2016, Canadian Solar had a whopping $3.26 billion in debt in a variety of notes payable, short-term debt, and long-term debt. The company has an estimated $950 million in potential power plant sales on the balance sheet and $1.0 billion in total cash.

Based on balance sheets alone, I would say that Canadian Solar is in slightly better shape, but both companies are highly leveraged with a lot of risky short-term debt.

Revenue growth for both Trina Solar and Canadian Solar will depend largely on growing their systems business. I don't think the module business will be high growth, at least from a revenue perspective, given the competition in the next few years and falling panel prices. The growth opportunity is in building systems.

But growing in systems isn't a certainty. Given the financing uncertainty and the relatively low number of bookings taking place for 2017 right now, growth in the next year or two will probably be weak, meaning stagnant revenue for both companies. The focus should be on growing the bottom line rather than the top line right now.

The one stock to own

Given the highly competitive nature of commodity solar panel manufacturing, I would be hesitant to bet too much on either Canadian Solar or Trina Solar. But the better stock among these two is Canadian Solar based on the utility-scale assets it's building in North America and its slightly better balance sheet.

But keep in mind that both companies make most of their money selling solar panels and that's been a pretty low-margin business long term. The future of solar is bright, but don't expect it to shine on everyone evenly.