Please ensure Javascript is enabled for purposes of website accessibility
Log In Help Join The Motley Fool
Free Article Join Over 1 Million Premium Members And Get More In-Depth Stock Guidance and Research
By Rich Duprey - May 19, 2016 at 10:21AM

No matter how you slice it, this pizza chain still has lots of potential.

Even day-old pizza tastes good, but Domino's Pizza's performance is anything but warmed-up leftovers, despite the market's reaction to its first quarter earnings report. Image source: Domino's Pizza Investor Presentation (May 2016)

Domino's Pizza (DPZ 0.71%) scared investors with its big year-over-year drop in domestic comparable sales growth, but now may be the time for the pizzeria to deliver major gains. Even with the slowdown, its domestic unit has built an enviable record of 20 consecutive quarters of sales growth, and when one looks at Domino's overseas performance, it's an incredible 89 straight quarters of expansion -- more than 22 years of ever higher comparable sales!

Make no mistake: Domino's first quarter numbers weren't pretty, and they were actually even worse than the headline numbers suggest, because it used an accelerated share repurchase program to buy back and retire stock, boosting per share earnings numbers. But the pizzeria is still growing, is still profitable, and has a sound plan to keep the momentum going.

Let's get the ugly out of the way. Although those first quarter comps of 6.4% represented an 810 basis point drop from last year, comps have been on the way down since the first quarter of 2015. They're more in line with performance seen just before the surge but are actually double the 20-year comps average. The meteoric growth that ended last year was the anomaly. 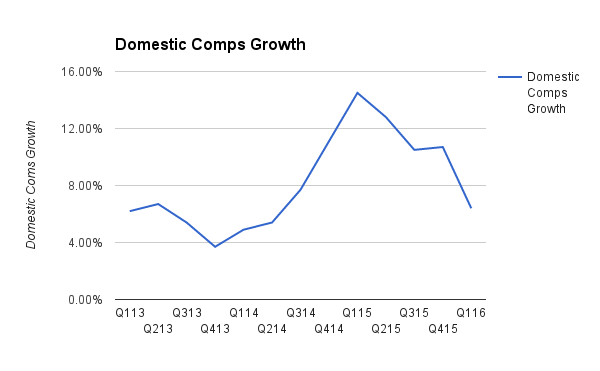 The first quarter comps shortfall also occurred during a period when the national burger chains were running heavily discounted promotions. Wendy's, McDonald's, and Burger King all offered bundled meal packages for $5 or less, deals that hit the earnings performance of Dunkin' Brands, Jack in the Box, and Bojangles. That pizza shops were also pinched is not surprising.

McDonald's has since largely dropped its promotion, even if it still lingers on in some places, and Wendy's is now shaking it up a bit to offer some customization, suggesting the fixed meal deal may be losing some steam.

It's also noteworthy that Domino's comparable sales peaked just as it officially changed its name, dropping the word "pizza" since it is now more than just about pies. Sure, pizza is still front and center on its menu, but you can also get sandwiches, pasta, and chicken dishes, too.

That may be a strategic mistake, regardless of its menu's fullness, because consumers know and love Domino's for its pizza, and that's what's will draw customers to its stores. More importantly, pizza remains a growth industry.

According to a national study by Smart Flour Foods and the Center for Generational Kinetics, more than a third of Americans go out for pizza and purchase a frozen pie from a supermarket at least once a month, while a November survey from the market researchers at Mintel found that 86% of its respondents reported having pizza at least once in the past three months. Pizza is second only to chocolate as the go-to comfort food for Americans.

Domino's has 5,200 domestic stores in operation, more than 4,800 of which are franchisee-owned. Internationally, it has 7,330 locations, giving it a total of more than 12,500 stores, but only 7% of total revenue comes from its international store base. As the company opens more stores in foreign markets than at home, it has an opportunity to grow that figure.

Comparatively, Papa John's has 4,900 stores in the U.S. and around the world, while Pizza Hut has some 16,000 stores globally. Yet according to the industry watchers at CHD Expert, Yum! Brands chain's 19% market share is barely ahead of Domino's at 16% (Little Caesar's and Papa John's follow at 12% and 9%, respectively).

One Foolish way to look at it

Domino's will feel some labor cost pressures as states implement higher minimum wages, but besides New York, the pizzeria doesn't have any corporate restaurants in the states that have implemented the biggest wage rate hikes (California and Washington are the others). So, it will be somewhat insulated from the effects.

The pizza chain has also outpaced the competition in terms of technology, where its mobile ordering platform -- even by texting an emoji -- has won plaudits for its ease and simplicity. It's also partnered with Apple to make ordering through the Apple Watch a breeze, as well as with Amazon.com's voice-controlled Echo technology. Domino's estimates it has recorded $4.7 billion annually in global digital sales.

President and CEO Patrick Doyle has engendered a remarkable turnaround at Domino's, and despite the deflation its first quarter report caused to its stock price, the pizzeria is still a sound operation. Its two-year comp is over 20%, a feat it has never before achieved.

It may not be the cheapest stock, but there were some singular items this quarter that, while knocking it down a peg or two, don't undermine the story as a whole, and Domino's Pizza should be set to deliver piping-hot returns for investors going forward.