Please ensure Javascript is enabled for purposes of website accessibility
Log In Help Join The Motley Fool
Free Article Join Over 1 Million Premium Members And Get More In-Depth Stock Guidance and Research
By Daniel Sparks - May 20, 2016 at 11:02PM

Both stocks have been hit hard recently, but only one business looks like a good investment.

During the past year, both capture device maker GoPro (NASDAQ: GPRO) and video processing chip maker Ambarella (NASDAQ: AMBA) stocks have been absolutely crushed. At the time of this writing, GoPro is down about 83%, and Ambarella is down about 54% in the trailing-12-month period. Ouch! 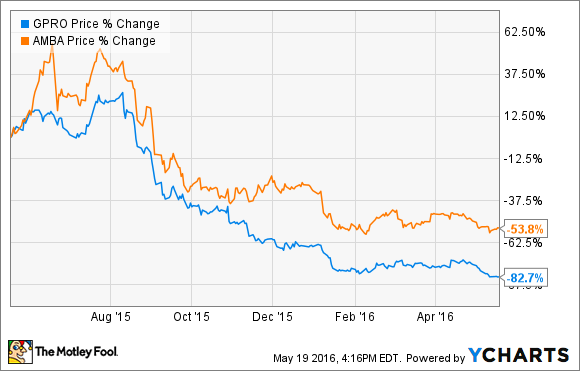 Does the sell-off make either stock a buying opportunity? Let's examine their investment potential by comparing them side-by-side.

The past twelve months for GoPro have been scathed by negative trends, including declining pricing power, narrowing profit margins, rising expenses, and growing losses. For instance, GoPro's first-quarter sales plummeted nearly 50% compared to the year ago quarter and its gross profit margin narrowed from 45.1% to 32.5% during the same period. Meanwhile, the company reported a $107 million loss in Q1 compared to a $17 million profit in the year-ago quarter.

A range of factors are to blame, including heightened competition, pricing mistakes, overoptimistic estimates for future demand, and slower-than-expected product launches.

For the full year, management is forecasting a year-over-year decline in revenue of about 8% to 17%.

Perhaps the only positive trend going for GoPro stock right now is its valuation. With investors worried the company may never see sales at the same level again, the business is essentially priced for more tough times ahead. GoPro trades at just 0.9 times sales.

Similar to GoPro, Ambarella's business has been through some tough times recently. This is largely, of course, because a large chunk of the company's business comes from being the lone supplier of video processing chips for GoPro capture devices. So, a portion of Ambarella's business is somewhat tied to the rise and fall in demand for GoPro products. In the company's most recent quarter, for instance, revenue was up just 5% -- far lower than the 45% year-over-year revenue growth Ambarella experienced in the trailing twelve months.

Fortunately, Ambarella's dependence on GoPro is deminishing. FBN Securities analysts estimate (via Barron's) GoPro devices will account for just 14% of sales this fiscal year -- down from an estimated 31% last fiscal year. Other areas of promise for Ambarella include security cameras, drones, and vehicles.

With Ambarella's business prospects looking more certain than GoPro's, the market has awarded the company a higher multiple to sales. Ambarella trades at 4 times sales -- more than four times GoPro's price-to-sales ratio of 0.9. There's merit, however, to Ambarella's steeper price-to-sales multiple; not only has the company maintained a gross profit margin above 60% amid this period of declining revenue, but the company's trailing-12-month net profit margin is as high as it has ever been -- at 24%.

So, what's the verdict? While both companies have faced serious challenges recently, Ambarella's business has proved it can weather the storm as it diversifies away from GoPro and beefs up its offering in other promising markets. GoPro, on the other hand, continues to signal red flags as its products are starting to appear more like beneficiaries of a short-term fad and as execution continues to lag.