Please ensure Javascript is enabled for purposes of website accessibility
Log In Help Join The Motley Fool
Free Article Join Over 1 Million Premium Members And Get More In-Depth Stock Guidance and Research
By Cory Renauer - May 20, 2016 at 10:31AM

The diabetes epidemic is enormous, but it takes more than a popular product to succeed.

In the United States alone, diabetes affects more than 29 million people. Although an estimated 8 million are still undiagnosed, that's a lot of insulin injections. MannKind Corp.'s (MNKD 4.46%) tiny device for discreet delivery of fast-acting inhalable insulin as you sit down to eat offers a convenience that's easy to understand.

To the shock of many shareholders unfamiliar with the the med-tech and biopharma industries, neither company has been able to produce profits, and both stocks have suffered losses recently.

If you're thinking about scooping up either of these innovative diabetes stocks on the cheap, I highly recommend a closer look. Let's walk through some recent developments and see which is the better buy.

MannKind's Afrezza is limited to less than 10% of the overall diabetes patient population. Those born without the ability to produce enough insulin, labeled type 1 diabetics, still require injections with a long-acting insulin, while generally using Afrezza before meals.

Not only is it not a replacement for insulin injections, but Afrezza also has black-box warnings, the FDA's most severe, for risk of breathing difficulty caused by tightening of the smooth muscle that lines the lungs' airways. For this reason, doctors, and patients, must jump through a bunch of hoops to assess a patient's general lung health to before prescribing it.

There's an argument that MannKind's former partner Sanofi didn't try very hard to market Afrezza after its launch last February. While I think FDA labeling limited sales, the fact remains that Sanofi pulled the plug at its first opportunity early this year. MannKind doesn't expect to begin another attempt with Afrezza, its only product, until the third quarter of this year, and at the moment it has no revenue to report.

DexCom, on the other hand, has been growing sales of its constant glucose monitoring devices at a blazing pace. Revenues in the first quarter were 60% higher than the same period last year. The little disposable sensors that communicate with different devices, including Apple's iPhone, made up 72% of those sales, which offers some indication that users are happy with the product.

The devices might do a bit better if they could replace standard at-home glucose monitoring devices. As approved, they're indicated to complement existing devices, not replace them.

Another sticking point for the innovative monitors is that even the latest DexCom G5 Mobile system requires at least two finger pricks per day for calibration purposes.

Mannkind has taken steps toward marketing. For example, it's armed its salesforce with lung function measuring equipment to give physicians that could make the pre-approval process a bit easier. It's a step in the right direction, but financing the launch is a much larger concern.

Each year, publicly traded companies are required to hire an external auditor and include the auditor's report in their annual financial statements. This March, MannKind's auditor not only slashed Mannkind's previous estimates of its existing assets but also issued a separate report about the company's ability to continue as a going concern. That's not something you see often, and it's incredibly troubling.

To shore up cash reserves, MannKind entered an agreement with some institutional investors that will basically increase the number of shares outstanding by about one-fifth. The net proceeds of about $47.4 million don't provide much of a cushion, considering the company burned through $24.8 million in the first quarter.

DexCom's finances are on fairly stable footing, its systems are popular, and the potential patient population is enormous. The trouble is, its products are still an adjunct to existing monitoring systems. They're not covered by Medicare, and private payers aren't too keen about reimbursing patients for them. Unless this changes, sustained growth at the present rate just doesn't seem possible.

Without profits or sales, it's impossible to put any sort of value on MannKind. Its balance sheet is terrifying. Adding estimated proceeds from the recent offering puts the company's total assets -- including property and equipment -- at at about $140 million. That's well below the $249.2 million in current liabilities, or debts to be repaid within the next 12 months. 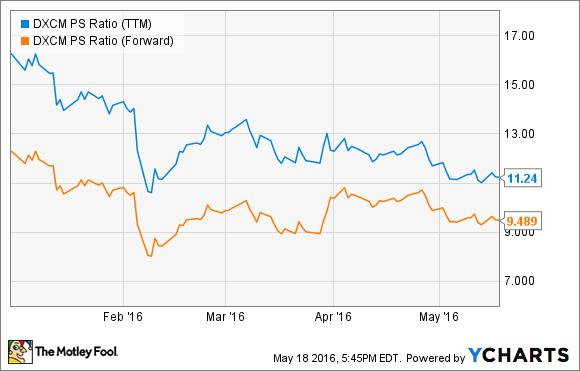 Without profits, we have to look at DexCom's price-to-sales multiple. At 11 times trailing sales, and over 9 times this year's estimates, DexCom stock still has a lot of optimism baked in. I'm sure its products will remain popular with people who can afford them, but that might not be enough to haul this company to Profit Town.

While I'd strongly recommend waiting until DexCom can show sustainable profitability, at least it's not depending on the summer's most successful product launch to avoid bankruptcy. That makes it a much better buy than MannKind, hands down.