Please ensure Javascript is enabled for purposes of website accessibility
Log In Help Join The Motley Fool
Free Article Join Over 1 Million Premium Members And Get More In-Depth Stock Guidance and Research
By Daniel B. Kline - May 20, 2016 at 1:18PM

The success of "The LEGO Movie" has convinced Hollywood that pretty much anything can be the basis of a movie adaptation.

At movie theaters, it's not uncommon for viewers to see a mock trailer for an action movie starring the M&M characters -- a trailer that ultimately turns into an ad for the snack treat.

It may seem silly, but a movie about talking chocolate candies isn't all that implausible. In a world where The LEGO Movie earned $479 million in global box office and Angry Birds, a movie based on the popular mobile game, just premiered, a real M&Ms film wouldn't surprise anyone. In fact, an M&Ms movie almost seems overdue when you consider that there are major motion pictures in development that star Peeps marshmallow candies and animated emojis.

Over the next few years, movie theaters will be crowded with films that sound like Simpsons punchlines. And while Tic-Tac-Toe: X v. O remains just a joke on the long-running sitcom, Angry Birds is only the beginning of Hollywood's slate of "Is this a joke?" films. 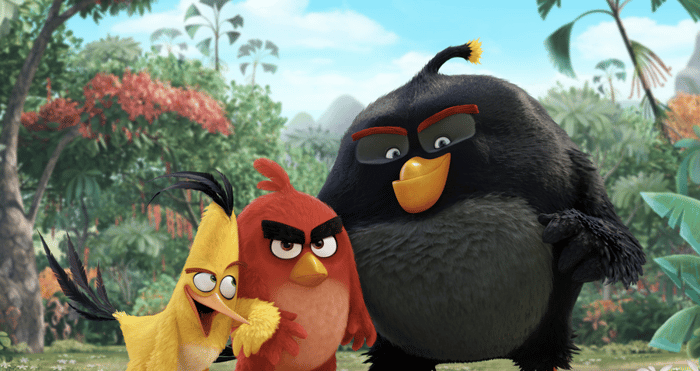 Angry Birds is based on the popular mobile game. Image source: Sony/Rovio.

You can blame The LEGO Movie

Before The LEGO Movie became a hit, toy-based films were a risky affair. Transformers has been a successful franchise for Viacom's Paramount, but that's an anomaly. In general, toy movies have struggled. Only the first G.I. Joe adaption has been a genuine hit, and the list of failures is long. These include Battleship, OUIJA, The Care Bears Movie, Kit Kittredge: An American Girl, Master of the Universe (based on the He-Man line), Bratz, and a lot more, according to Box Office Mojo.

However, Time Warner (NYSE: TWX) seemingly found a new formula with The LEGO Movie, which is spawning both a direct sequel and one built around LEGO Batman. The film borrowed heavily from the tone established in films like Shrek and Despicable Me -- movies that appeal to kids as well as adults -- and that appears to be a blueprint that others can follow. The teams behind Angry Birds and some other upcoming animated adaptations sure seem to think so.

Angry Birds will make it worse

Even though The Lego Movie was a big hit, it may have been a non-reproducible phenomenon -- a mix of great film-making and an iconic toy whose popularity spans generations. Angry Birds, which Entertainment Weekly predicts will make $45 million in the United States during its first week of release, will change that. The film, a partnership between app-marker Rovio and distributor Sony (NYSE: SNE), should be a big enough hit to prove the formula can be duplicated.

Though it's unlikely to be the runaway success that The LEGO Movie was, Angry Birds has already shown strong global appeal in a limited roll-out, and it should stay strong in the U.S. over the three-day Memorial Day weekend through the June 17 release of Disney's Finding Dory.

Angry Birds should also be a financial success because its budget was held to a relatively modest $73 million, according to the Los Angeles Times. Marketing, of course, pushes that number higher, but ultimately, this will be a profitable film, which will stoke the public's appetite for animated properties based on well-known characters, products or icons.

Here's what could be coming next

IMDB.com shows that The Emoji Movie is in development for a 2017 release, while an animated take on Hello Kitty is slated for 2019. These are not the only attempts in the works to animate characters or objects for the big screen. Filmmaker Adam Rifkin has optioned the rights to Peeps, the marshmallow chicks you generally find in Easter baskets, according to Deadline. The pitch for the film, which caused candy maker Just Born to sell the rights, invoked The LEGO Movie and described a "family epic set the night before a Peeps diorama contest, when a wayward Peep gets misplaced and must adventure through the fantasy lands of different-themed dioramas before the contest's judging begins."

As for The Emoji Movie, Sony announced details of the upcoming film earlier this year. The movie, ScreenRant.com reported, "will take place within the digital world of a smartphone."

In addition to these films, IMDB shows that Fox is developing Play-Doh: The Movie, and Screenrant.com reports that the Viewmaster and Magic 8-Ball toys have also been optioned for potential products. Deadline has also reported that Tetris: The Movie appears on its way to a green light.

Who wants to see a Play-Doh movie?

Hollywood will continue milking this formula until it fails, but that's a risky strategy, because the risk is high, and the rewards are generally low. Consider Angry Birds, for example: If you assume $73 million in production costs, along with another $100 million in marketing (a conservative estimate), recognizing that the theater companies themselves keep about half of ticket sales, then the film will need to make around $350 million at the box office -- probably even more -- before it moves into the black.

It will get there, and cable, streaming, and DVD sales will add to the profits. But in the short-term, think tens of millions in profit, not hundreds. For Sony, that upside could be wiped out and then some if The Emoji Movie bombs.

Of course, for investors, the real prize is building a franchise. Time Warner can now release a LEGO-based film every year or two with a built-in audience that could actually grow as early fans start having their own families. Similar outcomes are possible with Peeps, emojis, and even Play-Doh, but for every LEGO Movie, there will be at least a few Battleship-sized failures.

If somehow all, or at least most of these films are hits, then it probably won't be long before the M&Ms get a real film, along with Frappuccino: The Movie, and perhaps Jenga: The Motion Picture.