Please ensure Javascript is enabled for purposes of website accessibility
Log In Help Join The Motley Fool
Free Article Join Over 1 Million Premium Members And Get More In-Depth Stock Guidance and Research
By Brian Feroldi and Sean Williams - May 20, 2016 at 5:02PM

Here's the case for, and against, investing in Exact Sciences stock today.

Shareholders of Exact Sciences (EXAS 4.42%), a company focused on noninvasive cancer detection, have had a rough year. The company's stock has plunged by more than 75% as its revolutionary colon cancer detection test -- called Cologuard -- has failed to grow as quickly as many had hoped. 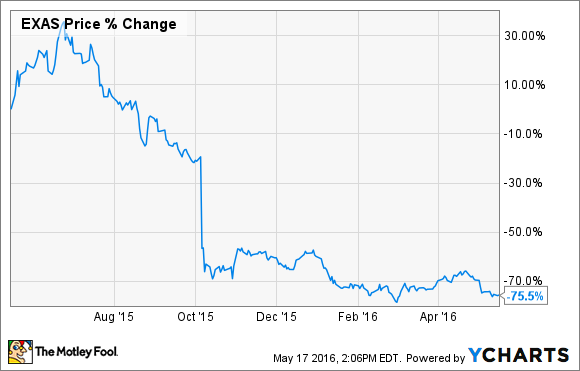 The disappointment has captured the attention of market bears, and they have sold more than 20% of the company's publicly traded float short, turning Exact Sciences into a battleground stock.

To help you understand why the investment community has such mixed feelings about this stock, we asked two of our healthcare contributors to share why they are either bullish or bearish on Exact Sciences' prospects. Read below to see what they said -- and if you agree with their sentiment.

Brian Feroldi: Exact Sciences is far from a perfect company, but I think there are several reasons to be bullish on its future, especially at today's prices.

First, it's clear to me that Cologuard not only works, but it increases patient compliance rates. That's important since detecting cancer early affords a patient a much better chance at beating the disease than when it's found at a later stage. Since compliance rates for today's standard-of-care treatments today are abysmally low -- only 0.3% of patients adhered to annual fecal blood testing over a 10-year period -- Cologuard's compliance rate of 71% in 2015 offers patients and providers a compelling alternative.

Second, I think Cologuard is only off to a slow start because of coverage issues and provider awareness, both of which are fixable. Exact Sciences already has Medicare on board, but it only has about 25% of commercial plans offering coverage. Management recently scored a big win when Anthem added Cologuard to its formulary, and I think it's only a matter of time before the rest of the payers jump on board, too.

To increase market awareness, the company has plans to spend aggressively, which should help stoke demand. Exact Sciences is launching a nationwide television campaign this year, and in early test markets, the company saw a doubling of new physicians who prescribed the system for their patients. That bodes well for the campaign's future success, and it should greatly increase demand.

Finally, the company isn't content to just be a player in colon cancer space. Exact Sciences believes its technology could be used to detect lung and pancreatic cancer, and it's also working on its next-generation version of Cologuard, which promises higher gross margins. That's a huge opportunity for both revenue and profit expansion if its plans pan out.

I'll fully admit the company's marketing plan won't come cheap, so expenses are almost certain to rise. That's not great for a company that's already losing money hand over fist. However, the company ended March with $262 million in cash on its books, which should give it ample time to get the word out on Cologaurd without having to raise capital anytime soon.

If the company's strategy for increasing access and awareness for Cologuard work, then I could easily see shares rising dramatically once again, especially from today's depressed prices.

Sean Williams: Molecular diagnostics company Exact Sciences has an intriguing idea on paper, and its FDA-approved diagnostic tool Cologuard could indeed make a difference in detecting early-stage colorectal adenomas and tumors. But there's a big difference between "cool science" and an investment-worthy idea.

The risk of developing colorectal cancer, like most cancers, increases with age, thus Cologuard is primarily being targeted at seniors. Considering that adenomas often take a good 10-15 years to turn into cancer, and the test had 42% detection rate of adenomas in clinical studies (detection grows easier as the adenomas grow), Exact Sciences is recommending a test be conducted every three years. On the surface, this sounds very lucrative. However, Cologuard finds itself mostly at the mercy of Medicare reimbursement pricing, which is my biggest concern with the product. The federal government has been trying everything under the sun to control Medicare inflation, meaning it's possible reimbursement rates for Cologuard could fall over time, adversely impacting Exact Sciences.

Secondly, even if colorectal cancer is the most preventable form of cancer, uptake of Cologuard hasn't been remotely close to what was expected. As of the first quarter, just 57% of its target population had access to the device through their insurer. Having spent 21 months on the market, that's still a very low number. Additionally, even though Exact Sciences boasts the highest compliance rate (69%) among patients suggested to use a noninvasive colorectal diagnostic, this means it's still losing out on 31% of its prospective patients.

A final concern would simply be the economics of the test. I haven't run the math to the exact dollar figure, but Exact Sciences is probably going to continue losing money unless it can complete around 1 million tests annually. This year, the company is sticking by estimates of completing 240,000 tests and generating $90 million to $100 million in revenue. Its facility has the maximum capacity of around 1 million tests per year. Yet, loss estimates for fiscal 2016 are nearly $2 per share. Annual losses aren't even expected to fall below $1 per share until fiscal 2019. Personally, I just don't see a ramp-up occurring quickly enough to justify its already-reduced valuation.