Please ensure Javascript is enabled for purposes of website accessibility
Log In Help Join The Motley Fool
Free Article Join Over 1 Million Premium Members And Get More In-Depth Stock Guidance and Research
By Nicholas Rossolillo - May 20, 2016 at 8:48AM

Future growth has been guided lower, but investors shouldn't get too worried about it.

After an incredible 10-year run that saw its stock double several times over, Priceline Group (NASDAQ: PCLN) has had much more modest returns the past two years. The reason? Investors have been mulling over prospects of the slowing business growth forecast by management, and digesting the recent and sudden change at the CEO position. Despite another strong showing in the top and bottom line in the first quarter of 2016, should investors be concerned with the online travel site's future growth prospects? 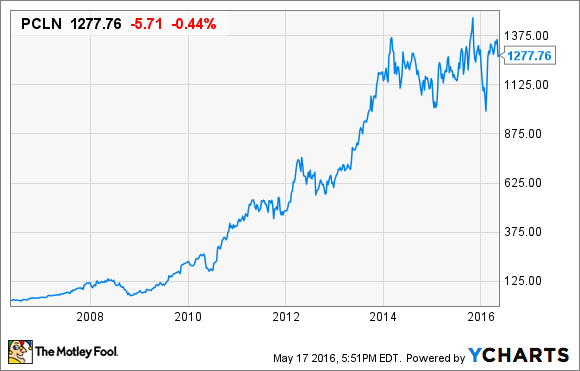 The Priceline Group posted double-digit growth in total revenue and net income. Booking revenue was up significantly over the previous year, offsetting weakness in other areas such as merchant revenues. Assets also saw a nice increase, as the company bolstered its short-term cash and investments. Liabilities increased, too, although this was primarily due to an increase in accrued short-term expense over the prior year.

Even though the numbers were very healthy, the biggest concerns surrounded the increase in operating expense and the abrupt departure of former CEO Darren Huston on April 28. Regarding the sharp increase in expenses, the company cited increased competition for priceline.com because of hotel cost-cutting. To offset some of the weakness seen in this segment, advertising and information technology expenses saw an increase. However, the majority of the expense increase was due to compensation to personnel, and the company sees expenses going down through the year as the company geared up in the first quarter for peak travel season.

Regarding the questions at the CEO position, investors were surprised to see the abrupt departure of Huston at the end of April regarding a violation of the company's internal code of conduct. An ongoing search is being conducted to replace him, but I expect a seamless transition that won't affect the business. Jeffrey Boyd, current chairman and CEO from 2002 to 2013, has stepped in to fill the void. Gillian Tans, a longtime member of Priceline subsidiary booking.com's leadership team, has taken over that CEO position, which Huston had also filled. While the company conducts its search, current tenured leadership should keep things moving forward.

Has growth dried up?

For the second quarter of 2016, Priceline management projected year-over-year revenue growth of 7% to 14% and expected adjusted earnings to be flat or down as much as 8%. Total growth in bookings is expected to decelerate the rest of the year. To be fair, the company beat its own expectations for the first quarter, but assuming expectations this go-around are correct, should investors be worried that the growth in the company is dying? I think there are a couple of things going for the Priceline Group that should put concerns to rest.

While worry over Priceline's own forecasted slowing growth may be concerning, the travel industry can be very volatile and seasonal. It's important to look at the strong track record of growth the company has posted over the years and compare that against its current pipeline of expansion opportunities. Well positioned within the travel industry and with a growing wheelhouse of services to make travel more accessible, this company can be assured that the worry over faltering growth is just noise.