Please ensure Javascript is enabled for purposes of website accessibility
Log In Help Join The Motley Fool
Free Article Join Over 1 Million Premium Members And Get More In-Depth Stock Guidance and Research
By Leo Sun - May 20, 2016 at 7:07AM

MSN China gets marked for termination amid fierce competition from Baidu, Tencent, and other rivals.

Microsoft (MSFT 3.20%) recently decided to shut down its MSN website in China on June 7. The portal currently hosts news, lifestyle content, and the company's Bing search engine for Chinese users, and its shutdown could represent a setback for the tech giant's efforts in China, home to over 720 million Internet users and a population over 1 billion. Let's discuss why Microsoft closed the site, and how it could impact the company's overall business. 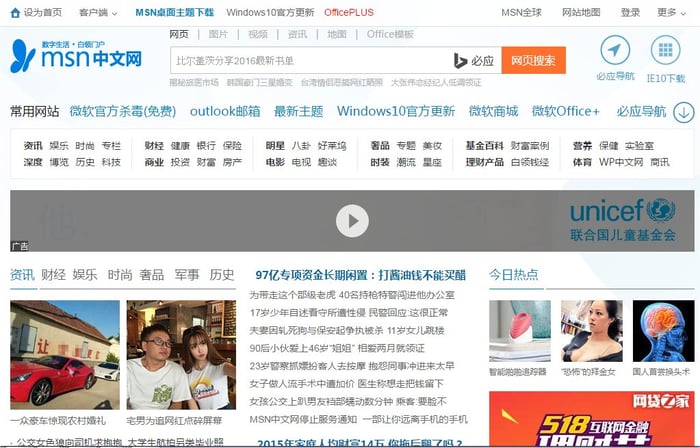 Why MSN flopped in China

Microsoft initially gained an advantage in China in 2010 when Alphabet's (GOOG 2.15%) (GOOGL 2.37%) Google exited the mainland search market after clashing with the government over censorship rules and allegations of state-sponsored cyberattacks. Microsoft agreed to play by the government's rules, and was allowed to continue running Bing in China.

Unfortunately, Bing never caught on. Baidu (BIDU -0.38%) was already the established market leader when Google left China, and it controls over 70% of the search engine market today. Bing only claimed less than 2% of that market last year. Baidu, like Google, leveraged its search dominance to create an expansive ecosystem of maps, cloud storage, portal sites, and online-to-offline (O2O) solutions for mobile users. The fact that "Bing" sounded like the word for "sickness" in Chinese also turned Microsoft's search engine into an unfortunate online joke.

Microsoft's MSN also failed to gain a competitive edge against the top portals in China. Tencent's QQ.com is the country's largest Internet portal, and hosts a massive ecosystem of gaming, media, and social networking sites. Its messaging app, QQ, had a whopping 853 million monthly active users at the end of 2015. Smaller portal and search rivals like Sina (SINA) and Sohu (SOHU -3.14%) also rank among the top 10 most popular sites in China,according to site tracker Alexa, but MSN China doesn't even crack the top 100. 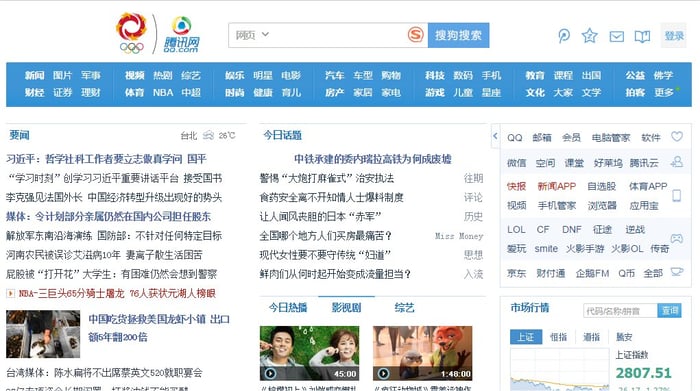 Why the death of MSN wasn't surprising

Microsoft initially hoped that Windows Phone and Cortana (rebranded as Xiao Na in China) could help it gain ground against entrenched companies like Baidu and Tencent, but those efforts flopped in the Android- and iOS-dominated market.

Microsoft then made Bing the default search engine for Windows 10, hoping that it could leverage the dominance of its OS to gain market share against Baidu. That effort also failed, and Microsoft agreed to replace Bing with Baidu as the default search engine last September. After those big setbacks, it became clear that Microsoft couldn't use its mobile or desktop OS to expand its ecosystem against companies like Baidu and Tencent.

Therefore, Microsoft's decision to kill off MSN wasn't surprising, since the site barely registered as a blip in the crowded Chinese Internet market. MSN is also faring poorly in the U.S., where it ranks 24th in terms of overall popularity, far below Google at No. 1.

Another headache for Microsoft in China

Microsoft doesn't disclose exact revenue figures from China, but previous statements from the company indicate that it's not impressive. Five years ago, then-CEO Steve Ballmer declared that software piracy swallowed up 95% of Microsoft's revenue from China, and that total Chinese sales were only equivalent to around 5% of U.S. sales -- although both countries had nearly the same number of PC users at the time.

Meanwhile, Chinese regulators have repeatedly cracked down on Microsoft with various probes. Regulators banned the installation of Windows 8 on government computers in 2014 due to security concerns, then hit the company with an antitrust probe that same year.

But despite all those setbacks, Microsoft hasn't given up on China. It recently set up a joint venture with the state-backed China Electronics Technology Group to deploy Windows 10 to government agencies. That move, Microsoft hopes, can reduce piracy rates and help the company avoid another widespread ban on its operating systems.

Microsoft's decision to kill MSN China was disappointing, but it was already destined to die a slow death. Microsoft likely realized that it was futile to fight an ecosystem war against companies like Baidu and Tencent, but that it could still grow its biggest asset -- Windows 10 -- across the country. Moreover, letting Baidu control the search ecosystem in Windows 10 might allay government concerns about NSA snooping.

Therefore, the shutdown of MSN China is a loss for Microsoft, but it's a calculated one that will help it allocate its resources to more important initiatives in the country.