Please ensure Javascript is enabled for purposes of website accessibility
Log In Help Join The Motley Fool
Free Article Join Over 1 Million Premium Members And Get More In-Depth Stock Guidance and Research
By Eric Volkman - May 21, 2016 at 8:31AM

George Soros discloses a monster investment in gold assets; perhaps he's on to something.

Several days ago, one of the richest human beings on Earth revealed he'd been bitten hard by the gold bug. George Soros' investment fund, in its quarterly disclosure of U.S. stock positions, revealed that the star investor loaded up on assets tightly linked to the commodity.

He also cut down significantly on his existing stock portfolio, and essentially invested over $400 million into the belief that the equities market as a whole will see a pronounced decline. The thinking behind these moves is fairly apparent -- let's see whether they're worth copying.

Specifically, between the latest disclosure and the preceding one -- filed in February -- Soros bought 19.4 million shares of miner Barrick Gold (GOLD -0.14%), valued at nearly $264 million, and over 1 million call options in an exchange-traded fund tracking the commodity's price, SPDR Gold Trust ETF (GLD 0.47%), valued at over $123 million.

Meanwhile, he sold off around 37% of the stock portfolio itemized in the February disclosure. He also reported owning 2.1 million put options on SPDR S&P 500 ETF, which tracks its namesake stock index. These are worth around $431 million.

(A put option gives the owner the right to sell a stock at a certain "strike" price; if the shares dive below it, the investor profits on the difference. A call option is the opposite -- the buyer has the right to buy a stock at an agreed strike price.).

Gold is perceived by many as a safety investment, not least because it's a classic store of wealth stretching back many centuries. Often in modern times, its price has risen during periods of economic trouble, like when financial crises explode, and when inflation or deflation start to rumble.

There is certainly correlation. Here's the gold price vs. U.S. inflation over the past half-decade... 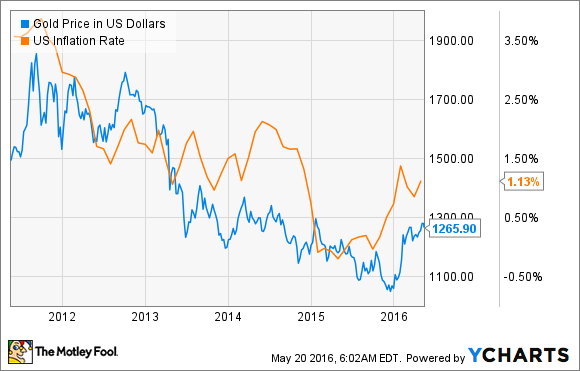 ...and here it is mashed against both the S&P 500, considered by many to be the bellwether stock index, and U.S. GDP. An inverse correlation is apparent. 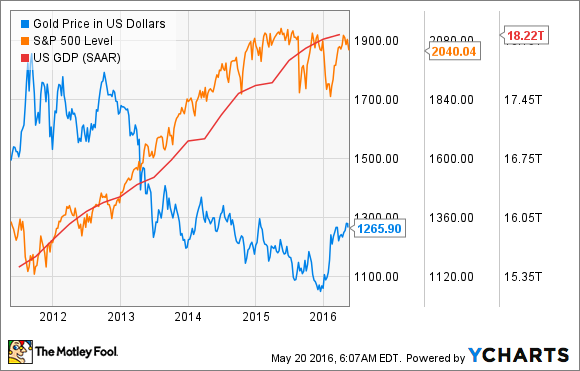 Soros' strategy seems clear. By selling over one-third of his stocks, buying put options in the belief that equities will crater, and loading up on arguably the most prominent gold company (Barrick) plus calls on a gold price proxy (SPDR Gold Trust ETF), he believes that the door is closing on the bull market.

And the bears will claw after classic alternatives, like that pretty yellow metal.

Soros hasn't specified the exact reasons for this recent gold shift. Taking a look at his recent pronouncements, it seems he believes China's economy will shatter, causing deleterious knock-on effects on various markets worldwide. Like equities in this country, for one.

Whatever the reason or reasons, he's not early to the gold party. The price of the commodity has risen notably so far this year, in tandem with Barrick Gold. There are numerous reasons why some investors are looking for perceived safe havens. They're skittish about factors like China, unrest in certain parts of Europe, a (perhaps unsustainably) strong dollar, etc. etc.

So your view on whether it's a smart move to dig for gold alongside George depends on how you view the proximate future of the markets.

If you feel a big equities sell-off is on the horizon, or the Fed's policies will inflate or deflate our currency, or some other negative(s) will result in a gold bug swarm, than you should definitely consider a Soros-like move in the direction of the commodity. If not, gold investments are probably not for you just now.

Soros is brilliant, and he's been spectacularly right on several notable occasions... but he's also been wrong more than once. He isn't infallible, and there's no guarantee he'll profit on this play.

So if you go the gold route, do so because you firmly believe that, for whatever reason(s), the value of those shiny bars will continue to grow in value. Not because a clever rich man is stocking up on them.