Please ensure Javascript is enabled for purposes of website accessibility
Log In Help Join The Motley Fool
Free Article Join Over 1 Million Premium Members And Get More In-Depth Stock Guidance and Research
By Brian Stoffel - May 21, 2016 at 9:00AM

Looking for exposure to international markets? Here's your chance.

Forget "Sell in May and go away." There are some great deals to be had in the stock market right now.

In fact, earlier this month, I put a significant chunk of money behind Chinese search giant Baidu (BIDU 1.86%). While the market has taken a huge bite out of shares, I believe that the future has never been brighter for the company -- and shareholders.

My most successful investments all share three key qualities:

When I track my returns, companies that share these three traits have returned an average of 17.3% per year -- while over the same time frame, the market has returned 12.2%. That's some serious outperformance, and it's why almost all of my new investments must embrace these three.

In Baidu, all three are available in spades.

Robin Li founded the company in 2000, and he still serves as the company's CEO. He and his wife have significant skin in the game: They control 53.8% of the voting power, and own 16.2% of shares outstanding. That equates to roughly $9.6 billion.

Baidu also has a very wide moat. Alphabet's (GOOG -0.27%) (GOOGL -0.21%) Google decided not to pursue China's search market in 2010, largely due to concerns about government regulation. That has left the field wide open for Baidu. Although Qihoo 360 (QIHU.DL) has proven to be a pesky thorn in Baidu's side, the company remains the undisputed king of search in the Middle Kingdom. 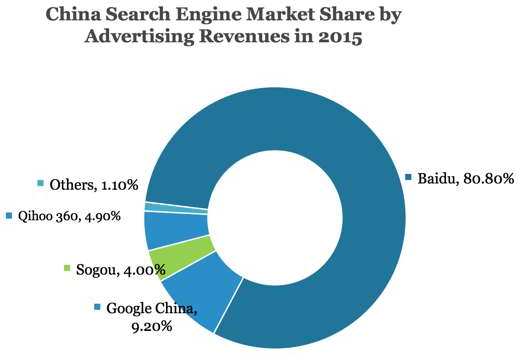 As we've seen stateside, once a dominant search engine becomes the de facto site for all things search, it occupies significant mind space and is very difficult to displace. As Baidu gathers more and more data about users, its advertising space becomes more valuable to Chinese companies.

Finally, Baidu -- and almost all major search engines, for that matter -- is the epitome of a company embracing "optionality." We'll define this as "tinkering with low-risk bets that have high upside potential for future business lines." Already, Baidu has expanded into self-driving cars, artificial intelligence, virtual reality, email, maps... you name it.

Not all of these bets are going to have big payoffs. In fact, most of audacious ones will fail. And that's ok: Baidu has about $11 billion in cash and short-term investments on its balance sheets -- it can absorb small losses. But all it needs is for one or two of these big experiments -- like AI or self-driving cars -- to hit in order to make a big difference in the company's bottom line.

Why is Baidu's stock down so much?

In late 2014, Baidu's shares traded for as much as $250 per share. They've fallen over 30% since then, and there are two key factors holding it down.

There's actually one aspect of "optionality" that I left out above: Baidu's O2O strategy. Think of it like this: A Chinese citizen wants to search for movies at the local theatre and buy tickets. She jumps online, searches using Baidu, finds her movie, and -- this is the key -- buys her tickets while never leaving Baidu's platform.

The movie theatre is glad to have Baidu handle the process, as it doesn't have to cover the payment infrastructure, and the ease of the transaction makes people more likely to follow through on buying a ticket. Baidu wins because it gets to keep a tiny fraction of each transaction. Multiply that times trillions of such transactions ever year, and you get an idea for the opportunity at hand.

Alphabet would love to have had the chance to develop such a platform, but as it was the first major search engine, by the time it figured out that such a thing was a possibility, individual companies had built their own systems and apps to take care of the transaction. By learning from Google's experience, Baidu still has time to capitalize.

But the initiative requires a huge up-front investment: operating costs surged 51% last year. The infrastructure of the O2O system, combined with a sales force to convince businesses to sign on to the program, costs a lot. That has driven margins and profitability down, for the time being.

Realizing the opportunity that Baidu is seizing, I'm OK with that. Sales are expected to grow by 30% during the second quarter -- an impressive feat for such a big company -- and O2O has the potential to keep these growth rates elevated for some time.

Earlier this month, the Cyberspace Administration of China announced that it was investigating Baidu for its advertising practices, specifically healthcare advertisements. The move came when a student died after researching treatments for cancer on Baidu's search engine, paying $31,000 for a therapy, and finding out shortly before dying that the ad that led him to the treatment was highly misleading.

While the student's death is an obvious tragedy, it's the potential loss of healthcare ad spending that has investors worried. Currently, such ads comprise 25% of all Baidu ad revenue, and investors worry that if the government imposes restrictions, revenue could take a precipitous fall.

While I acknowledge that such restrictions could create some short-term revenue pain, I have a tough time believing that this could be the type of problem that will still plague the company decades from now.

Because I'm a long-term, buy-to-hold investor, I have the luxury of taking that long view. Many on Wall Street don't. And if you're an individual investor with the right temperament, it's worth investigating Baidu -- and the three traits I believe make it a long-term winner -- for your own portfolio.